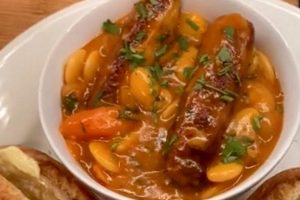 A chef has shared a recipe for sausage casserole that can fill four hungry bellies on a budget of just £5 and it's won him lots of fans.

He says the only bits he didn't include were the salt and pepper and flour – which he reckoned most people have in their cupboards.

The chef, who has released his own recipe book, starts by cooking the sausages in a large pan and then puts them aside for later.

Mitch then fries some sliced onion in the same pan, before adding his chopped potatoes, carrots, tomato puree, and flour to thicken it.

He adds chicken stock and lets the ingredients simmer in the pan, then seasons it with some black pepper and a spoon of mustard.

Mitch puts the "bake at home" bread into the oven and, while it's cooking, adds the already-cooked sausages and the tin of butterbeans to the casserole.

The chef then finishes it off with a flourish of fresh parsley and serves the stew in a bowl with the warm baked baguettes.

One user commented: "I make a similar one with baked beans easy warming food."

A second viewer said: "This looks well nice and so easy, really good for big families!"

Meanwhile, other people argued it was too much effort to cook food from scratch.

One person asked: "Why go to this extreme effort, when you can buy frozen chips, Turkey Twizzlers and beans?"

Another commented: "This is great but how do people actually have the effort to do this? Not me."

Would you make this hearty-looking stew? Have your say and let us know in the comments below