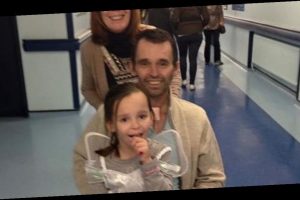 A dad has been left permanently disabled after a medical blunder which resulted in food being flushed into his lungs at least twice.

Michael Moy was diagnosed with a brain tumour and had underwent successful surgery at Queen's Hospital in Romford, when bungling medics changed his life forever.

A feeding tube was inserted into the dad-of-two which was regularly replaced, and on each occasion a chest x-ray should have been conducted but it was not, Essex Live reports.

This resulted in food being flushed into Michael's right lung on two occasions.

The error was only discovered when the 58-year-old from Basildon, began coughing up blood which sparked further medical examinations.

Around a week later, doctors found another tube in his lung, and over the next month he underwent 14 x-rays which showed an expanding abnormal area of the lung.

He remained in hospital for four months and since then he has been diagnosed with emphysema and bronchiectasis, a condition where the lungs become abnormally wide, leading to a build-up of mucus that can make them more vulnerable to infection.

The former railway emergency planning manager now suffers from regular coughing fits daily and regularly has lung infections, some of which has required him to go to hospital.

In addition he is unable to enjoy many of his hobbies, such as cycling and running where he would previously venture as far as 15 miles.

He now has permanent lung disease  and a shortened life expectancy resulting in him being forced to retire early for health reasons.

He said: “My life has totally changed following my lung problems.

"I enjoyed working and going running and cycling as well as many of the things people just take for granted. However, all that has now gone.

“Even day-to-day tasks such mowing the lawn is now a struggle. I had not really needed to have to go to hospital for 50 years but it seems like I’m there regularly now.

“The last few years and trying to come to terms with what happened has been incredibly difficult for all of us."

He continued: “This event has changed my life from an adventurous 50 something who was active in all aspects of my daily living into a person who finds it difficult to catch my breath doing simple tasks and paranoid with any future medical procedures.

“I’m anxious about what the future holds and what it will mean for me and my family. I try not to think about it but it’s difficult and it’s also difficult not to feel angry at what has happened.

“I just hope that by speaking out more is done to improve patient care. I appreciate that doctors and nurses face an incredibly difficult job but it’s unacceptable that so many never events are still happening. It seems like many of these could be avoided by a few simple checks.”

NHS policy requires staff to check the position of a feeding tube before administering food.

A root cause analysis of the incident which took place between October 21 and 23, 2014, via a report by Barking, Havering and Redbridge University Hospitals NHS Trust, found that the tubes were not checked prior to Michael being given food.

Michael's case is a 'never events' which is a serious, largely preventable patient safety incidents that should not occur if healthcare providers have implemented existing national guidance or safety recommendations.

Michael, along with his legal team from Irwin Mitchell Solicitors, are calling for the NHS to do more to reduce the number of never events and crucially to be open and honest when these incidents occur.

His legal team secured him an admission of liability and an undisclosed settlement to cover his future care, medical treatment and loss of earnings.

Richard Kayser, expert medical negligence lawyer at Irwin Mitchell, representing Michael said: “Never events are classed as such because they should not happen but sadly we continue to see the effects they have on patients.

“The consequences of liquid or food reaching the lungs are extremely serious and can have long-term health implications including serious disease of the organs.

“What happened to Michael has had a profound effect on him and his family. It would have been easily avoided if the hospital had carried out basic checks to establish the position of the tube.

“While nothing can make up for what has happened we are pleased to have secured the settlement for Michael which will provide him with peace of mind regarding his future.

“The number of never events that the NHS is continuing to record is worrying.  As with Michael’s case, every time a never event occurs, it is vital that they are thoroughly investigated and that information is shared across the NHS so that they can eliminate such issues.”

Kathryn Halford, Chief Nurse and deputy Chief Executive, said: “We are extremely sorry that we did not live up to our own high standard of care in this case, and apologise to Michael and his family.

“We would like to reassure them that we have learned lessons to ensure it does not happen again. This includes introducing a new policy on use of feeding tubes, which ensures that these are always checked by a senior nurse.”

END_OF_DOCUMENT_TOKEN_TO_BE_REPLACED

END_OF_DOCUMENT_TOKEN_TO_BE_REPLACED
We and our partners use cookies on this site to improve our service, perform analytics, personalize advertising, measure advertising performance, and remember website preferences.Ok