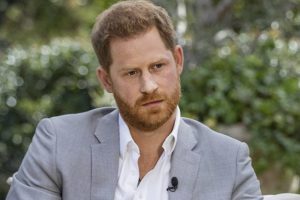 In the wild, heady days after Harry and Meghan, Duke and Duchess of Sussex, explosively announced they wanted out of full-time royal life in early January last year, a series of giddy, wholly unsubstantiated rumours flew, including one that the couple was set to be invited to the 2020 Academy Awards.

It would have been a glorious moment – Meghan in some sublime couture confection; Harry looking pleased as punch at his stunning wife in a dinner suit – but even then the notion of two members of the royal house mingling with the stars of Ford vs Ferrari seemed far-fetched and unlikely.

Fast forward to today when there is every chance that the 2023 Oscars race could see at least one HRH (if not perhaps two) appear on the list of nominees, with the Sussexes’ Archewell Studios having added a bevy of Academy Award-winners and a nominee to their roster.

Overnight the duo’s first project for Netflix was announced with Harry set to executive produce, and appear on camera, in a “moving and uplifting” docuseries which will follow competitors in the run-up to the 2022 Invictus Games in The Hague.

“I couldn’t be more excited for the journey ahead,” the Duke said in a statement which included the standard paucity of details these sorts of announcements usually do.

However, what is notable about the news is that it carries with it more than a hint of a swipe at the palace.

The world has waited more than six months, since news first broke of the Sussexes “megawatt” deal with the streaming giant broke in September last year, to get our first glimpse at what sort of thrilling, novel projects the duo might cook up.

However, the very choice of this specific series to be their debut outing reads like a stinging rejoinder after he was stripped of his treasured military titles earlier this year.

Back in February, Buckingham Palace announced that Harry and Meghan would lose their remaining official royal roles including as Captain General, the Royal Marines, and Honorary Air Commandant, RAF Honington, for him and as the Patron of the Royal National Theatre and vice president of the Queen’s Commonwealth Trust for her.

This Invictus project will not only reinforce but also spotlight and celebrate Harry’s commitment to the veterans, a cause that he has regularly spoken about with passion and conviction.

In unveiling this series as their first Netflix outing, the message seems loud and clear: No matter whether he holds a clutch of shiny titles or not, Harry’s dedication to this cause is steadfast.

That is, the 36-year-old does not need any sort of royal imprimatur to keep supporting the men and women who have fought for their countries; that the ties which bind the Duke and the military community run deep and will not be affected one jot by some starchy change of an honorific.

When this series finally launches, there in shining HD will be a lengthy, moving reminder of what the royal family lost when they failed to find a way to keep Harry and Meghan on the payroll last year.

And then there is the use of the word “service” in today’s press release.

“I couldn’t be more excited for the journey ahead or prouder of the Invictus community for continuously inspiring global healing, human potential and continued service,” Harry said in the official statement.

The question of service – who and how one can live a life committed to the greater good – has very clearly been a sore point for the retired army major.

When the couple were stripped of their titles, they put out their own statement which pointedly concluded: “We can all live a life of service. Service is universal.”

That move – essentially them talking back to the Queen – went down like a militant vegan being invited to haggis night at Balmoral.

The Times reported that Prince William felt the California-based couple’s rejoinder had been “insulting and disrespectful” to the Queen, and was “very upset by what has happened”.

Another royal source said simply: “You don’t answer the Queen back – it’s just not done.”

A handful of days later, Harry told James Corden, as the two filmed a cringey TV segment atop a bus, “We never walked away … I will always be contributing. My life is public service, so wherever I am in the world, it’s going to be the same thing.”

Factor in today’s Netflix news and it would seem that the Duke feels a need to keep drumming home the point that he can and will dedicate himself to the greater good, whether his granny says he can do it in her name or not.

This all comes nearly a year to the day after the Queen gave her historic TV address, only the fifth of her reign, on April 6 last year, to rally a scared nation, urging Britons to stay resolute in the face of the pandemic and saying: “We’ll meet again.”

The tragic irony here is that one thing that unites Her Majesty, the institution of the monarchy and both of the Sussexes’ is an unwavering, truly impressive commitment to helping others.

Sadly, that dedication is no longer being channelled in service of the monarchy but instead will ultimately benefit Netflix’s coffers.

Two years from now, as the Queen will be approaching her 97th birthday, will she count an Oscar-winner or two among her family members? I wouldn’t bet against it.

• Daniela Elser is a royal expert and writer with more than 15 years experience working with a number of Australia’s leading media titles.