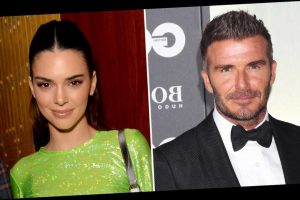 Learning from the best! While many stars are accomplished cooks in their own right, there’s no denying that several of them inherited their culinary skills and love of food from their parents.

Take Adrienne Bailon, for example. The Real cohost cooked with her mom, Nilda Felix, in a September 2018 video on her YouTube channel and could barely contain her excitement. The mother-daughter pair made empanadas using a trusted family recipe. “This recipe means so much to me because it’s actually my favorite food ever in life,” Bailon explained. “I watched my mom make this recipe when I was growing up nonstop and I watched my grandmother make it. It’s always my special request when she’s here.”

The former Disney Channel star, who is married to Israel Houghton, is such a fan of her mom’s cooking that she even adapted the recipe for her own family and makes a Thanksgiving-themed version of the dish each year. “We create empanadas filled with all of the Thanksgiving leftovers,” she said, noting that the treats are made with cranberry sauce, sweet potato, turkey, stuffing and more. “It is so good!”

Another star who has learned a lot about food from her family is Chrissy Teigen. The Cravings author has been open about how much food knowledge she’s absorbed from her mom, Vilailuck Teigen, and the pair frequently cook together in videos for the star’s Cravings website.

In April 2020, the Bring the Funny judge and her mom (whose nickname is Pepper Thai) teamed up to make Korat-style pad Thai, which is a staple from Pepper’s hometown. While Pepper did the cooking, Teigen playfully teased her off-camera for not providing measurements for any of the ingredients she was using in the dish. “You can’t just tell them to finish the bottles of whatever they have!” the Chrissy’s Court host explained, telling her viewers: “Now you know how hard it is for me to write her recipes.”

Teigen, who has her own line of Cravings cookware, has even talked about how Pepper has influenced many items from her popular collection. “As my go-to chef for all my favorite comfort foods, my mom (‘Thai Mom,’ more famously known as @pepperthai2) has been such a big influence on my flavor palette and all things Thai culture,” Teigen, told Target in May 2019. “So when it came time for my line, I really wanted to include items from that side of me.”

Scroll down to see stars cooking with their parents!