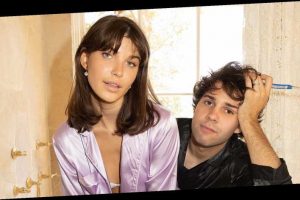 David Dobrik fans have been following his every move for years on YouTube and social media, but his venture into the beauty industry was one some of his followers didn’t see coming.

The Most Influential Celebrities on Social Media

“I really wanted to start a perfume so I could make a perfume commercial. I’ve always wanted to make one of those,” the 24-year-old YouTuber exclusively told Us Weekly while promoting his new brand — the appropriately titled — David’s Perfume. “The first person I thought about [for the ad] was Charlotte [D’Alessio]. … I was like, ‘She’s perfect for it.’ There’s no other person that could fit the role of what this is, it has to be more than her. I asked her, and I don’t know why, but she said yes. And I’m so happy she did. She’s the best. She was so fun to work with. And she, like, coached me through all of it. Because I’m, like, really awkward when it comes to posing and modeling and looking cute.”

After the ad dropped on October 2, it didn’t take long for rumors to start that the pair were dating.

“I was excited to know I had a girlfriend. I had to text Charlotte [to] make sure that it was true. And she said it was not true, in fact, that it was just rumors,” he joked to Us. “So no, we’re not dating. I really, really like her. And I think she likes me, but we’re not there.”

While it’s hardly the first time Dobrik’s fanbase has speculated about his love life, the creator told Us that it doesn’t bother him.

“I think it’s [the] funniest thing because people only see so little of what you’re showing them. So, they just assume,” the Dodgeball Thunderdome host said, noting that his followers constantly insist that he’s dating his assistant and longtime friend, Natalie Mariduena. “I’ve known her since she was a toddler. Like, that’s not even possible. But it’s just funny that people will just be like, ‘No, no, no, even though he says he doesn’t like her, he does.’ I’ve never been bothered by it. I just think it’s funny how wrong people can be.”

Dobrik, who has more than 18 million YouTube subscribers, has taken a break from posting on the platform amid the coronavirus pandemic. While he told Us that he’s thinking about bringing back his popular four minutes and 20-second videos in “early” 2021, he wasn’t ready to commit to a timeframe.

“I really want to [return to vlogging] when the pandemic is, like, over with. I really do. I just don’t want to document any of this, what’s going on,” he explained before making a reference to the Disney Channel movie franchise Halloweentown. “The world feels like when Halloweentown goes gray. Or that’s how the entire world feels like for me right now. I don’t want to remember any of this. Other than the perfume.”

“Sometimes I’ll post TikToks and I’ll be like, ‘F—k should I not even post TikToks because every time I post anything, I feel like I’m just pissing people off because it’s not an announcement about me vlogging,’” he admitted. “I’m scared they’re gonna turn on me. They’re just gonna be like, ‘It’s been too long without a vlog.’ My least favorite thing is I saw a comment the other day and I was like, ‘Oh, he got his bag and he left.’ … Like, what do you mean? Why would I just stop if that was my actual motive, making money? Why would I just stop after making it happen? That’s never my motive. It sucks that people make up things.”