David M. O’Brien, a scholar and author who dissected the Supreme Court’s internal machinations and ideological dynamics, treating it as a political institution as much as a legal one, died on Dec. 20 at his home in Charlottesville, Va. He was 67.

His daughter Sara O’Brien said the cause was lung cancer.

Dr. O’Brien taught politics at the University of Virginia for almost four decades. He wrote, co-wrote or edited more than a dozen books, the best known of which was “Storm Center: The Supreme Court in American Politics” (1986), which won the American Bar Association’s Silver Gavel Award and is now in its 11th printing.

“Storm Center” focuses on the inner workings of the court and its culture, which Dr. O’Brien said is often more chaotic than it appears. The book takes its title from Oliver Wendell Holmes, who said, “We are all quiet here, but it’s the quiet of a storm center.”

As Dr. O’Brien said during a C-Span interview in 1986, “Within the court internally there is a dynamic, a political dynamic, in which justices compete for power, compete for influence over the final decisions.”

That dynamic intrigued Dr. O’Brien, and he examined the court through the lens of the justices’ backgrounds, personalities and behind-the-scenes interactions.

“David came to realize that behavioral science was a better window into the justices’ thinking than the cases and statutes they would cite in an opinion,” Ronald K. L. Collins, a professor at the University of Washington School of Law, said in a telephone interview. 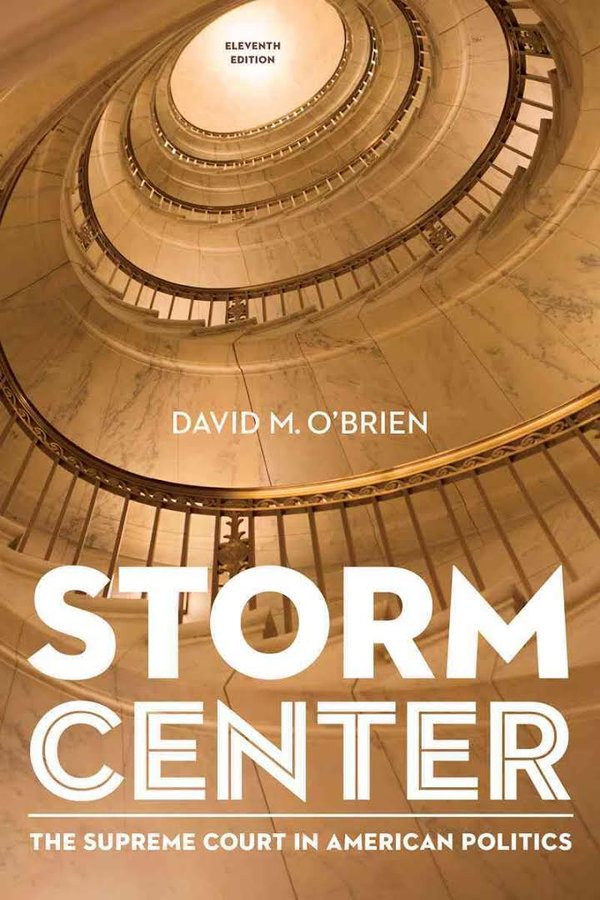 Over the years, Dr. O’Brien met and interviewed numerous justices and their colleagues and combed through their archives as well as presidential libraries for insights into their opinions.

He viewed the court as a human institution with great flexibility, changing with the times and the composition of the court. This view sprang from his time as a judicial fellow there in 1982 and 1983 and as a research associate for Chief Justice Warren Burger from 1983 to 1984.

Dr. O’Brien shows in “Storm Center” how those politics were evident, for example, as the justices hashed out the landmark 1954 decision Brown v. Board of Education. Aware that moving too quickly could provoke a violent reaction in the South, they determined that “separate but equal” schools were unconstitutional but did not order immediate desegregation. “Some justices,” he wrote, “would never have gone along with a ruling mandating integration.”

Lee Epstein, a political scientist at Washington University in St. Louis, said in an email that although Dr. O’Brien’s “knowledge of doctrine and history was deep and wide, he never neglected the role political forces play in shaping the justices’ decisions and, ultimately, the law.”

Dr. O’Brien also believed that the justices’ personalities could determine whether they could sway their colleagues to their views.

Dr. O’Brien said that Chief Justice Burger did not like “Storm Center” “because it portrays the justices as individuals with different judicial philosophies that often conflict.” As a result, he said, while many justices leave their papers to the Library of Congress, where researchers have easy access to them, Justice Burger, who died in 1995, left his to William & Mary Law School and imposed a moratorium barring access until 10 years after the last Justice who served with him dies, or 2026, whichever comes later.

David Michael O’Brien was born on Aug. 30, 1951, in Rock Springs, Wyo., where his father, Ralph, worked in school administration and his mother, Lucille (Resel) O’Brien, was a homemaker. As his father’s job changed, the family moved to various cities in Southern California, where David and his brother, John, grew up.

Dr. O’Brien then taught politics at the University of Puget Sound in Tacoma, Wash., and served briefly as chairman of its politics department.

He joined the faculty of the University of Virginia in 1979 and had been the Leone Reaves and George W. Spicer professor of politics there since 1996.

He also held numerous teaching positions around the world, including at Oxford and the University of Bologna in Italy. He was a Fulbright specialist lecturer on constitutional law and politics in Brazil and a Fudan senior fellow in recent summers at Fudan University Law School in Shanghai.

In addition to his wife and his daughter Sara, he is survived by his mother and brother; his son, Benjamin; another daughter, Talia O’Brien; and one grandson.