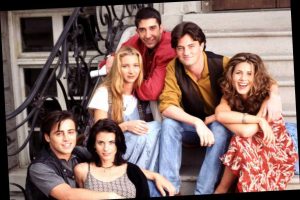 ‘Friends’ reunion postponed again on HBO Max due to COVID-19

David Schwimmer has an update on coronavirus-postponed ‘Friends’ reunion

Peacock: What to watch on NBC’s new streaming service, how much it costs

‘Friends’ reunion will resume shooting in August after coronavirus delay

They’ll finally be there for you.

The much-delayed — and anticipated — “Friends” reunion on HBO Max will finally be taped “in a little over a month,” according to cast member David Schwimmer.

The 54-year-old actor, who played nerdy paleontologist Ross Gellar on NBC’s 1994 to 2004 sitcom, revealed the updated plans Wednesday during an interview with SiriusXM host Andy Cohen.

When asked about where things stand on the project, Schwimmer spilled the beans.

“Oh, it’s happening. Actually, in a little over a month, I’m heading out to LA,” he said. ‘So, finally, I mean, we figured out a way to film it safely, and there’s going to be a portion of it that we film outside because of, you know, for safety protocols.”

“Friends” stars Schwimmer; Jennifer Aniston, 52; Courteney Cox, 56; Lisa Kudrow, 57; Matt LeBlanc, 53, and Matthew Perry, 51, were initially expected to regroup for the special in time for the HBO Max launch in May 2020. But with the outbreak of the coronavirus pandemic, filming was delayed, and delayed again, and again, and again, and again, and … well, you get the idea. They were on a break. And it seems they’ve had to pivot a lot since then.

But when the gang does actually get back together, don’t expect them to be in character. In an interview with Variety last summer, Kudrow said she “will not be Phoebe,” and Aniston added that she “will not be Rachel, although I kind of am. Well, we’re all sort of little fragments of them. Not really. But yeah.”

In Wednesday’s chat, Cohen also asked about the rumor last year that daytime talker Ellen DeGeneres might host the reunion special. “No,” responded Schwimmer, adding that Billy Crystal was also not in the running. (Nor is Cohen, who remarked, “Oh, my God, I wish it was!”) Schwimmer then said that he doesn’t know who actually will be the host, confessing that he “should’ve found that out.”