Home » Lifestyle » David’s Bridal is filing for bankruptcy, but they say your dress is safe

David’s Bridal is filing for bankruptcy, but they say your dress is safe

The company plans to declare Chapter 11 bankruptcy, a type of filing that allows distressed companies to reorganize their debts and liabilities without interrupting operations or closing stores. David’s Bridal had already come to an agreement with a “vast majority” of its lenders to shed $400 million of debt and inject enough cash into the business to keep operations and growth prospects, according to the statement.

In other words, they are telling brides their dresses are safe.

“We are, and will continue to be, open for business,” said Scott Key, David’s Bridal chief executive officer, in a video released Thursday. Key said all brides would receive their dresses on time.

But not everyone is convinced. In July 2017, bridal chain Alfred Angelo closed shop and filed for Chapter 7 bankruptcy, a move that left hundreds of brides without dresses, even after paying for them. After closing unexpectedly, the store told its customers that if they hadn’t received their dress yet, they wouldn’t receive them.

One L.A. bride, Dullah Khalil, had friends lose dresses in the Alfred Angelo aftermath and told CBS News she doesn’t want to take any chances, despite the company’s reassurances. Khalil purchased a floor sample from a David’s Bridal store in February, paid for her alterations in advance and the tailor was set to begin later this month.

Because it was a sample rather than a regular custom order, the store offered to clean it, but then the store temporarily lost the dress with no explanation for two months. 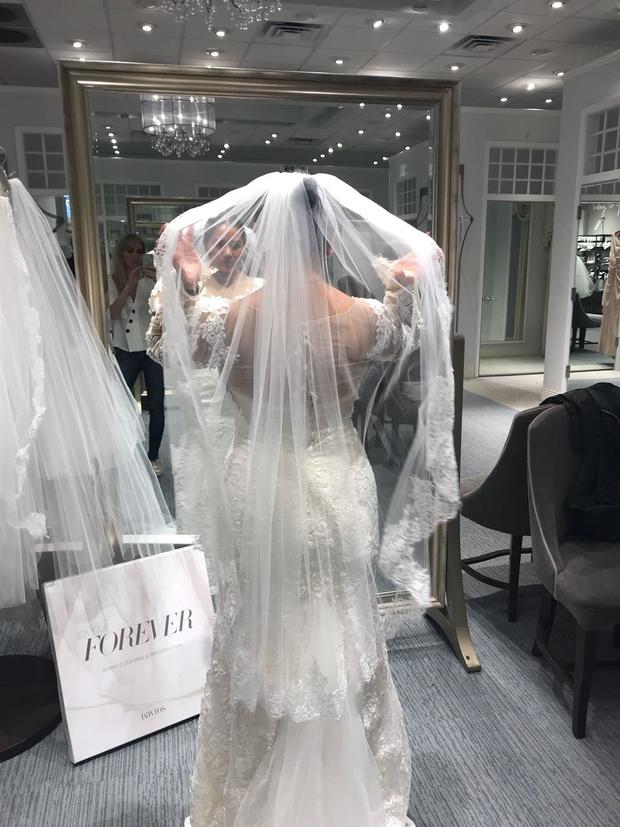 Durrah Khalil tries on a dress at David’s Bridal.

With her dream dress back in her possession, she’s reluctant to hand it over in case she can’t get it back.

“I still don’t trust it at this point, I’d rather just cut my losses,” Khalil said in a telephone interview with CBS News on Thursday. “It’s not just the money, but the actual dress that I love. I don’t want to lose it.”

When Khalil asked David’s Bridal for her money back, nearly $300, the company refused.

Khalil said knew she wanted to buy a David’s Bridal dress long before an engagement was on the table. While living in London, Khalil went to the store’s opening in 2012 with a friend and was in awe.

“It was plush and really quite luxurious, just such a nice experience,” Khalil said.

But when it was her turn to find a dress, Khalil said the experience was underwhelming and a bit disappointing. “I feel that’s hemorrhaged along the way,” Khalil said.