Home » Lifestyle » ‘Dear Lala, my boyfriend’s mate shares his intimate videos – should I tell his girlfriend?’

‘Dear Lala, my boyfriend’s mate shares his intimate videos – should I tell his girlfriend?’ 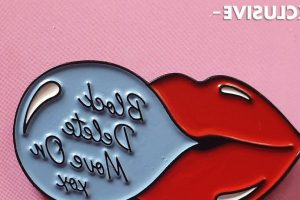 In a new twist on Lalalaletmeexplain 's hit column, readers ask for her expert advice on their own love, sex and relationship problems.

Here, she offers advice to a reader who's partner's best friend is sharing intimate videos and pictures of his new girlfriend – and thinks it's hilarious.

Are you an OK! VIP ? If not, why not? It’s free and gives you backstage access to stories like this, exclusive home tours, special discounts and so much more! All you need to do is pop your email address below! P.s. if you’re already seeing this article in full, congrats – you’re already on our guest list!

My boyfriend’s best friend Mark is a bit of an idiot (actually, a massive idiot). He is currently seeing a woman, I don’t know her, but I will probably meet her at some point soon. Yesterday, my boyfriend played me a WhatsApp voice note from this woman that Mark had forwarded to their group chat. She was speaking about intimate stuff like what she wants to do to him and what she wants done to her. He also sent a video to the group chat of her twerking naked, you can see everything. I’m pretty sure that she sends these things to him in confidence but now the video and the voice notes are being bandied around the WhatsApp boys group. They all think it’s hilarious.

I feel awful for this woman. I told my partner that I think it’s disgusting that Mark is sending this stuff around. Maybe the woman should know better, but most of us have sent some risqué stuff to the people we are dating before. I’m getting married next summer, and Mark has asked for her to be his plus one at our wedding, so I will definitely meet her there, if not sooner. Should I reach out to her now though to let her know what is going on? Or do I just stay out of it and accept that this stuff happens and if you send naked videos around you need to accept that it could be sent to others too?

Mark does sound like a massive idiot. He is behaving like an excited schoolboy, though even if he was an excited schoolboy this still would not be acceptable behaviour. He has violated her trust and privacy. Unless she has specifically stated that her voice notes and videos can be shared, then he is knowingly embarrassing and humiliating her by sharing their intimate exchanges publicly. He may also be breaking the law.

So called ‘Revenge Porn’ laws came into place in England and Wales in 2015. It is a criminal offence to share private sexual materials, either photos or videos, of another person without their consent with the intent to cause distress. It is also an offence for other people to share the images/videos with others. So, if your boyfriend (or one of the other men in the group chat) sends the videos on, they are committing a criminal offence. (Idiot) Mark might argue that he was not sharing her private sexual materials in order to cause distress, but any reasonable person can agree that she would be likely to be distressed if she were to become aware of the fact that she is being laughed at in a WhatsApp group by a man she trusted.

It sounds like Mark is more concerned about impressing his mates than he is about honouring and protecting his relationship. This says a lot about him. It suggests that he may be insecure, and that maybe he doesn’t even like women that much. If he is willing to humiliate his partner in order to get a reaction from the lads, then that would indicate that he cares much more about validation from other men than he does about her needs and feelings. The fact that he thinks it’s funny to share their intimate messages shows a high level of sexual immaturity, and a ton of misogyny.

A grown man who respects women and our sexual autonomy is not going to find it humorous to share sexual images of his girlfriend, he’s not going to find it unusual, or wild, or funny that she has shared those things with him. A childish misogynist who thinks that women who own their sexuality deserve to be put on display without their consent probably will. Misogyny makes him want to impress his friends by showing them how horny his new girlfriend is, and to humiliate her for her sexual liberation. It’s giving big ‘ my d*ck is bigger than yours and I’ll throw my partner under the bus to prove it’ vibes.

However, his penis swinging competition only works because he is receiving the validation that he is so desperately seeking from his friends. If he had sent those things and the group chat had responded by telling him that he was making himself look pathetic, then perhaps he would reconsider what he sends. But it sounds like this group chat is a safe space to humiliate women. It doesn’t seem like anyone, including your fiancée, has told him how wrong it is.

The way that you have said ‘ I told my partner that I think it’s disgusting that Mark is sending this stuff around. Maybe the woman should know better……’ makes me wonder whether ‘she should know better’ was your partner’s response to your concerns about this. Why should she know better? We’re talking about a relationship with a man who has invited her to be a plus one at a wedding nearly a year away, this is not a random one-night stand, this is someone who she clearly sees a future with and who has shown her that he sees a future with her too. It sounds like she trusts him – she should be able to trust him.

To say that she should know better is victim blaming. She is being blamed for his actions. He is the one who should know better. She should have known better is what people say about drunk women who are raped. It suggests that we should all exist under the assumption that all men are sex offenders and that if we end up being at the receiving end of their offending behaviour (in this case ‘revenge porn’) then it’s our fault because we didn’t protect ourselves from them. That is not a healthy attitude for anyone, let alone someone who is in a relationship with a woman. If you go on to have daughters, will it be their fault if a boy exploits and humiliates them because they should have known better?

Sadly, I do feel that it is important to warn people that sending sexual images is always done at your own risk. Once you press send those images are out in the ether, you no longer have complete control of them, and they could end up anywhere, as proved by this letter. Any sharing of nudes should be done with the knowledge that there is a chance that these could be laughed at in a group chat. And, that they could be used against you. You have provided the recipient with ammunition that could be used to blackmail or harm you. I wouldn’t send a nude to anyone because I would be mortified at the thought of them getting into the wrong hands. People should only send if they are comfortable with the risk that those nudes could end up on Pornhub or be sent to their workplace. This does not mean that it is your own fault if they are shared, nobody is to blame but the sex offender who shared them. If they are shared it does not mean that you should have known better. You should be able to trust the person you sent them to, but the point is that you can’t always, and therefore, if you really wouldn’t be happy for your nudes to go public, it’s best not to send them at all. Turn up at his house naked instead.

In terms of whether you should tell her, girl code would say that you should. Girl code is an unspoken rule among women and girls that tells us that we are in this together, we are all seen as second-class citizens in a male dominated society and if we don’t support each other then we enable men to continue to treat us like crap. If I was her, I would want to know. But I think it’s important for you to consider the snowball effect that may occur because of you telling her. It may lead to the end of their relationship, which may lead to Mark blaming you and your partner – though he is squarely the one to blame – which may lead to wider ructions within the friendship group and your own relationship. You may end up being blamed for Mark’s wrongs.

So, I wouldn’t blame you for not telling her in order to protect yourself. However, what I do think is important for you to work on, is getting to a place where your partner acts as an ally. It would be much more powerful if your partner were to inform Mark that he is appalled by his actions and to ensure that the group chat is no longer a safe space to humiliate women. You shouldn’t have to be solely responsible for protecting women from awful men, good men should be part of that too. I really hope that this woman leaves Mark. When you do eventually meet her make sure you tell her to follow my page, she needs all the help she can get.

Follow @Lalalaletmeexplain on Instagram for more advice on sex and relationships. Have a question for Lala? Email [email protected]