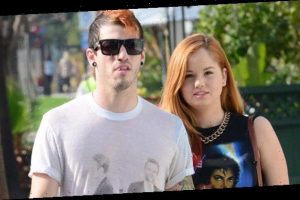 Debby Ryan and Joshua Dun are excited to start a family, after they secretly tied the knot in Texas on New Year’s Eve! And, HollywoodLife has learned that the actress and musician aren’t wasting any time trying for baby!

Debby Ryan and Joshua Dun are just full of surprises. Following news of the couple’s secret New Year’s Eve nuptials, HollywoodLife has learned that they could have another announcement sooner than later. “It is likely that they will start their family very soon. No one should be surprised one bit if more life-changing announcements come within the next few months,” a source close to the Jessie star, 27, told us, exclusively.

News of their Austin, Texas wedding broke on May 21, when Debby and the Twenty One Pilots drummer, 31, were featured in Vogue. The newlyweds gushed about their dream nuptials, which they planned in just 28 days, in a candid interview with the magazine. Now, they’re living in marital bliss.

“All is going so well with them and they’re so in love,” the source continued. “They’re living the honeymoon phase of their relationship and loving it.”

The couple is glad that they wed when they did before the COVID-19 pandemic, which sparked country-wide a quarantine in April going into March.

“Debby is so happy that she had her wedding when she did because now, with the world we live in, she doesn’t know if it would have happened,” the source said, adding, “It’s been special for her to relive all of her amazing wedding memories now that the news is out.”

Debby and Ryan dated on and off since 2013. The musician proposed in December 2019, and the actress announced the news in a post on Instagram at the time. Speculation that the two secretly married began when fans spotted his wedding ring in the music video for his band’s song “Level of Concern,” released in April. Congratulations to the happy couple!

END_OF_DOCUMENT_TOKEN_TO_BE_REPLACED

END_OF_DOCUMENT_TOKEN_TO_BE_REPLACED
We and our partners use cookies on this site to improve our service, perform analytics, personalize advertising, measure advertising performance, and remember website preferences.Ok