‘Deeply concerned’: Wong says Labor must be consulted on Ukraine

Labor foreign affairs spokeswoman Penny Wong says she is deeply concerned about Russian threats to Ukraine and has requested the federal government consult the Opposition on any changes to Australia’s position heading into this year’s election.

Senator Wong also said China should use its close relationship with Russia to convince it to respect Ukraine’s sovereignty, as concern grows of a major conflict amid a build-up of more than 100,000 Russian troops near its border with the former Soviet republic. 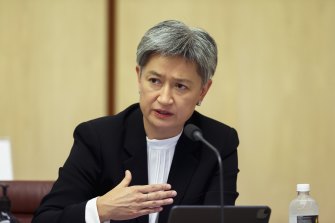 Crucial talks are being held between American and Russian diplomats this week, with US Secretary of State Antony Blinken warning Moscow of “massive consequences” if the build-up continues.

Ukraine and Russia have been in conflict since 2014, when Moscow annexed Ukraine’s Crimean Peninsula. Tensions have escalated in recent months, with Russia sending thousands of troops to the border, sparking fears of a Russian invasion.

If Russia were to invade Ukraine, the United States and the North Atlantic Treaty Organisation (NATO) may look to commit troops to help defend the nation and this could include a request to Australia for a military contribution.

Senator Wong said Labor expressed its support for “Ukraine’s sovereignty and territorial integrity, and join international calls for Russia to de-escalate and abide by its international commitments”.

“Labor, as Australia’s alternative government, is deeply concerned about threats to Ukrainian sovereignty and the build-up of more than 100,000 Russian troops at the Ukrainian border,” she said.

Senator Wong said Labor would continue to seek regular briefings from government agencies, including the Office of National Intelligence and the departments of Foreign Affairs, Defence and Home Affairs.

“Moreover, we expect to be consulted on any developments in Australia’s position,” she said. “In an election year, it is critical that bipartisanship be maintained on challenges to national security that affect us all and go beyond domestic politics.”

Senator Wong also said China’s close relationship with Russia “means it has a unique responsibility to urge restraint from Moscow – and for China demonstrate support for international law, including the integrity of the borders of all sovereign states”.

As the US has butted heads with Russia and China in recent years, Chinese President Xi Jinping and Russian President Vladimir Putin have increasingly forged a united front.

But Elizabeth Buchanan, a lecturer of strategic studies at Deakin University and Fellow of the Modern War Institute at West Point, said assuming Beijing had the ear of Moscow was problematic.

“There has yet to be any formal acknowledgement by Beijing of Russia’s Crimea claim, nor has Moscow waded into the South China Sea dispute,” Dr Buchanan said.

“In fact, China might perceive it now has even more room to manoeuvre in the Indo-Pacific should the US (and its European allies) be further distracted or bogged down in Europe.

“If anything, I would expect China to continue to simply watch from the sidelines. Beijing has no major interest in easing tensions.”

Dr Buchanan said international law and the primacy of sovereign borders were of prime interest to Australia and taking a “principled stand” was important.

But she said Australia might also have to consider “defence support to any allied mission”.

“However, in the context of Ukraine, which has been simmering since 2014, our allies have been rather hesitant to increase tensions with armed forces. Instead, dialogue has been the avenue selected.”

Hervé Lemahieu, director of research at the Lowy Institute, said presidents Xi and Putin
“share a common enemy, and I think never underestimate the uniting qualities that presents”.

“They are both intent on weakening the US global position, and whilst their foreign policies are not identical, they are mutually complementary.”

Mr Lemahieu said a war in Ukraine would present significant challenges for Washington – “potentially either letting Russia get away with it or detracting from its efforts in the Indo-Pacific”.