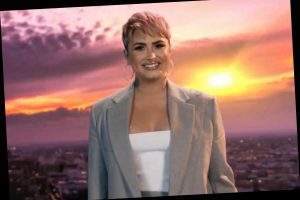 Demi Lovato shares the reason for her short haircut: ‘I feel free’

The 28-year-old pop star shared a lengthy Instagram post, originally shared by transgender rights activist Alok Vaid-Menon, on Thursday in an effort to shed light on a “belief system that presumes non-trans people to be more ‘natural’ than trans people.”

The explainer states that it is “both insincere and incorrect to pretend that gender reveal parties are not transphobic.”

“This is not about political correctness, it’s just … correct,” the post adds. “We condemn gender reveals not because of our identity, but because of reality.”

“Gender reveals are based on the illusion that genitals = gender and that there are only two options ‘boy or girl’,” the post continued.

“This definition erases the fact that there are boys with vaginas and girls with penises and that there are people who are neither boys nor girls. The idea that sex is based on genitalia is inconsistent with science.”

Lovato got some support from fans, but many followers in her comments disagreed with her declaration, with one user writing: “Baby girl most of parents just wanna celebrarte [sic] that they’re having a baby. Not the gender of the baby.”

“Let people do what they want,” another said. “Mind your business!”

Lovato is a member of the LGBTQ community. In January 2020, she told Andy Cohen of her sexual fluidity, “I’m still figuring it out.”