Devah Pager, a Harvard sociologist best known for rigorously measuring and documenting racial discrimination in the labor market and in the criminal justice system, died on Nov. 2 at her home in Cambridge, Mass. She was 46.

Michael Shohl, her husband, said the cause was pancreatic cancer.

In her seminal work, Dr. Pager, who was the Peter and Isabel Malkin professor of public policy at the Kennedy School of Government at Harvard and a professor of sociology at the university, documented what she called the “powerful effects of race” on hiring decisions, which she said contributed to persistent inequality. Employers, she found, were more likely to hire a white man, even if he had a felony conviction, than a black man with no criminal record.

“This suggests that being black in America today is essentially like having a felony conviction in terms of one’s chances of finding employment,” Dr. Pager said in a video interview with the Stanford Center on Poverty and Inequality.

Her finding, which appeared first in her doctoral dissertation in 2003 at the University of Wisconsin, Madison, surprised many.

“I am a scholar of race relations,” William Julius Wilson, the Harvard sociologist and author of “The Declining Significance of Race,” said in an email, “and prior to Devah’s research, I would not have predicted this finding.”

Her research quickly found its way into the 2004 presidential campaign. Howard Dean, the former Vermont governor and at one time the leading contender for the Democratic nomination, often cited it, saying he was determined to combat the “institutional racism” it revealed.

With the subject in the air, and the recognition that ex-convicts were less likely to commit more crimes if they had a job, President George W. Bush created a program to help newly released prisoners re-enter the job market. White House aides said at the time that Dr. Pager’s study had helped shape the plan. 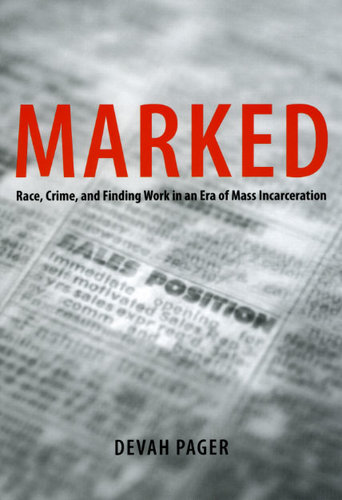 Her research was remarkable enough for having such an immediate effect on public policy. It was all the more unusual for having originated as a dissertation; graduate students are not often able to undertake field experiments on such a scale. But she cobbled together funding from five sources, including the National Science Foundation, to support her work. Her dissertation became a book, “Marked: Race, Crime, and Finding Work in an Era of Mass Incarceration” (2007).

“By her mid-30s, she had established herself as a historic figure in the scientific study of racial discrimination,” Mitchell Duneier, chairman of the sociology department at Princeton, said in a telephone interview.

Her work was so well regarded that she had been on track to be elected to the prestigious National Academy of Sciences — a rare achievement in any case but even rarer for someone in sociology, for a woman and for one so young. Upon her death, her name was removed from the ballot because membership cannot be given posthumously.

“Had she not died, she was a sure bet to be elected,” Robert M. Hauser, who was one of Dr. Pager’s advisers on her dissertation at Wisconsin, said in a telephone interview.

Devah Iwalani Pager was born on March 1, 1972, in Honolulu. Her father, David Pager, is professor emeritus of computer sciences at the University of Hawaii. Her mother, Sylvia (Topor) Pager, who died in 2015, was a pediatrician.

In addition to her husband and her father, she is survived by her son, Atticus, who is 5, and two brothers, Chet and Sean. She and Mr. Shohl were married in 2016, after Dr. Pager’s diagnosis.

Dr. Pager became attuned to racial issues when she left Hawaii, which has a high rate of interracial marriage, for Los Angeles, which she found more segregated. “When you grow up with that being normal,” she told The New York Times in 2004, “everything else seems strange — and wrong.”

In Madison, she volunteered to help homeless men. She met many black men with prison records, who told her of their difficulties finding work. 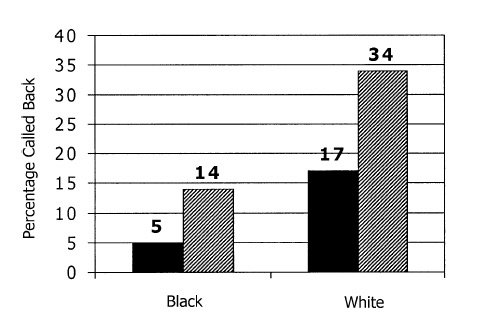 That gave her the idea to try to isolate the effect of a felony conviction on job applicants. She recruited two teams of young, well-groomed, well-spoken college men of the same height — one team black, the other white — and gave them identical résumés as they applied for 350 entry-level jobs in Milwaukee. The applicants took turns saying they had served an 18-month sentence for cocaine possession.

Before Dr. Pager’s research, there was no way to know for sure why ex-convicts had such trouble getting jobs, said Prof. David B. Grusky of Stanford, who worked with Dr. Pager.

“What Devah showed, contrary to this view, is that employers do indeed discriminate,” he said in an email. “And not just a little bit on the margins.”

She went on to replicate these findings in 2004 in a similar study in New York City. At the time, she was teaching at Princeton and worked with Bruce Western, another Princeton sociologist. This time, the teams applied for 3,500 jobs.

Their findings gave momentum to the so-called ban-the-box movement, which urged employers to eliminate the box on job applications asking whether the applicant had a felony record. Several major employers, including Walmart, Home Depot and Koch Industries, have now removed the question from their job applications.

“Ultimately, the Equal Employment Opportunity Commission issued a guidance saying that a criminal record by itself shouldn’t disqualify people,” said Dr. Western, who now teaches at Columbia and had been in the midst of another project with Dr. Pager when she died. “There was a direct line from Devah’s work to that guidance.”

Dr. Pager was a mentor to scores of students and continued to teach until three weeks before her death.

Her husband said she loved to ride bikes, sing and dance and frequently organized karaoke nights. Her signature song was the anthem popularized by Gloria Gaynor: “I Will Survive.”