Fitzroy Crossing, about 400 kilometres east of Broome, has borne the brunt of the devastating floods after ex-tropical cyclone Ellie dumped heavy rain over the region, causing the Fitzroy River to peak at a record 15.8 metres. 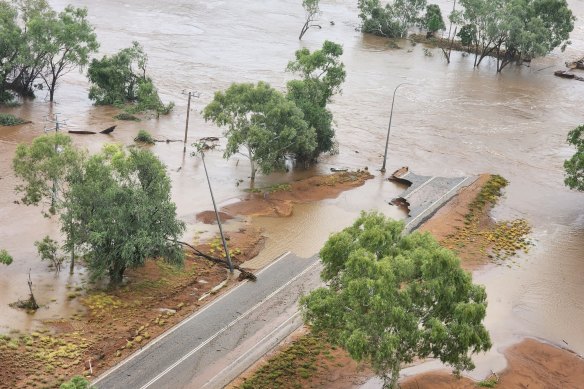 Albanese described the flooding as a “one-in-100-year event” in a radio interview on Monday, before boarding a small plane to tour the damaged region and meet with volunteers and victims at the evacuation centre.

“I’ve seen photos of the bridge there into Fitzroy Crossing and it’s just gone like that – the road has just dissipated. So quite clearly there’s going to be massive infrastructure investment required,” he said.

“There will also be required support for individuals. And that support needs to be not just financial, of course, but we need to bear in mind the need for counselling and support as well. People will be devastated by the experience that they’ve gone through in recent days.”

Albanese will tour the region with WA Labor senator Pat Dodson, who is based in Broome, and Emergency Management Minister Murray Watt, along with WA Premier Mark McGowan and WA Emergency Services Minister Stephen Dawson.

He said recovery efforts would also target remote Indigenous communities around Fitzroy Crossing that had been cut off by the floodwaters as he noted that record-breaking disaster events were occurring more frequently.

“This is a devastating impact. We’re seeing far too much of it, I’m afraid,” Albanese said.

“I’ve now been to Tasmania, Victoria, NSW, South Australia, and now WA, in the relatively short time that I’ve been prime minister looking at these events, talking about a one-in-100-year event over and over again.”

Hundreds of residents who fled the Fitzroy Crossing region are still waiting to return home.

Planeloads of food and supplies are being flown to the cut-off town as damage assessment teams look to quickly give people the green light to come home.

“We know that the bill will be substantial and my government is committed to providing whatever support that we can in partnership with the WA government, but also local government, working with communities to make sure that the rebuilding occurs as quickly as possible,” Albanese said.

Derby and West Kimberley Shire president Geoff Haerewa said emergency services and volunteer organisations were now on top of the situation but hundreds of evacuees were crowded into makeshift evacuation facilities such as community halls.

“There’s no air conditioning and we don’t have the toilet facilities and the kitchen facilities to deal with a crisis of this size and magnitude,” he said.

Haerewa called for government funding for fit-for-purpose evacuation centres and flood-resilient roads and infrastructure to protect communities from future disasters.

Federal Deputy Opposition Leader Sussan Ley said the government needed to focus on rebuilding communities in the aftermath of floods and other natural disasters.

“The government does need to stay the course across Australia when it comes to rebuilding after the floods,” she said.

Several other Kimberley communities are expecting flood peaks by the end of Monday. Concerns the NT would face more flooding eased on Sunday as Ellie subsided.

Severe weather warnings for remote communities in the Simpson, Lasseter and Tanami districts were cancelled by authorities on Sunday morning.