Dionne Warwick responds to ‘SNL’ sketch poking fun at her 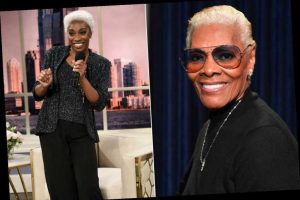 Dionne Warwick has nothing but praise for “Saturday Night Live” star Ego Nwodim.

Taking to Twitter, the new queen of social media — who also celebrated her 80th birthday over the weekend — gushed over Nwodim, who portrayed Warwick in a sketch from Saturday’s episode.

“This was a hilarious birthday gift. Thank you, @nbcsnl. That young lady’s impression of me was very good and who knew @BrittaniWarrick had so many jobs?” Warwick tweeted Sunday afternoon.

In the “Dionne Warwick Talk Show” skit, Nwodim chats alongside Timothée Chalamet’s Harry Styles, pressing him about Wendy Williams’ past comments about Warwick.

“One last question, Harry Styles, why is Wendy Williams being a b—h to me? She started beefing and now she acting like she can’t finish,” Nwodim said as Warwick.

Recently, Williams, 56, spoke about Warwick’s recent Twitter activity on an episode of her talk show.

“I totally believe that she is doing her own tweeting, but I think that Brittani [Warwick’s niece] is her right hand. After Aunt Dionne does what she wants, after midnight, maybe after some bud,” Williams said.

Warwick, who was arrested in 2002, and claimed she had been framed, per Billboard, addressed Williams’ remarks last Wednesday on Twitter.

“A friend alerted me that Wendy Williams was spending a lot of not nice time speaking on me. I tuned in to her show to catch the last few minutes of her speaking about me and as in the past she seems not to be able to speak without maliciously made comments,” Warwick tweeted.

“My hope is my name will refrain from being spoken or thought of by her as this conversation was held a few years ago letting her know there was nor would be any need for her to say the name Dionne Warwick for any reason. I don’t believe one has to be mean to get noticed,” the crooner continued.

“You did a wonderful job, baby. You are a star. @eggy_boom,” Warwick tweeted.

“I just logged in to tell @eggy_boom @SNL and the other young lady that they did a wonderful job. I hope you all have a great Sunday. I’ll come back if I get bored,” she continued.

Warwick’s tweets have gone viral in recent weeks, including a previous exchange with Chance the Rapper.

END_OF_DOCUMENT_TOKEN_TO_BE_REPLACED

END_OF_DOCUMENT_TOKEN_TO_BE_REPLACED
We and our partners use cookies on this site to improve our service, perform analytics, personalize advertising, measure advertising performance, and remember website preferences.Ok