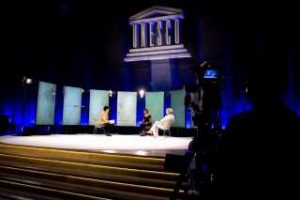 PARIS — Dior took to the stage of UNESCO’s assembly hall for a [email protected] Dream conference, featuring a host of executives from the fashion house, along with officials from the international organization.

“The pandemic has worsened all inequality — especially for women,” said UNESCO director-general Audrey Azoulay, in opening remarks for the program. “With Dior, we have a common ambition of supporting women and in particular promoting the autonomy of young women at a very unusual time for the world,” she added.

There is concern that 11 million girls will not return to school, in addition to 130 million in the world who were already not being schooled, according to the director, citing the figures as a key reason the organization is focusing on educating women through its Global Education Coalition. Dior joined the coalition in July of last year, drawing on it to extend its mentorship program, [email protected], to countries where it wasn’t already in place, like Jamaica, Pakistan, the Philippines and Sri Lanka.

“UNESCO today helps us when it comes to creating content, and with inspiring women who can serve as models for young women, again, touching other continents, other countries where we are not necessarily present,” said Emmanuelle Favre, director of human resources at Christian Dior Couture, speaking to WWD on the sidelines of a recording session for the program.

“We also work with UNESCO on future projects, notably on education for younger people,” she added. Plans are in the works to set up a school teaching artisanal craftsmanship of the house in Morocco, for example.

Favre held a key role in establishing Dior’s mentorship program, which was set up in 2017.

“We wanted to find an original idea — a lot of things had already been done to celebrate International Women’s Day, and we wanted to find something different,” she said. The idea was to pair young women employees at the company — under 30 years old — with young students.

“With the idea of giving them self-confidence, to build a network, to teach them to dare and to welcome ambition,” explained Favre. “Mentoring interested us because it involved our employees in all the actions we were undertaking in terms of inclusion and diversity.”

“We try to integrate our employees as much as possible, because we think it is a culture that has to be spread and shared, so that everyone feels responsible and involved — so that it’s not just coming from management,” added the executive.

Joining with UNESCO reinforced the educational dimension of the program, while making it more international — it was originally set up in countries where the house is present.

More recently, men have been getting involved, making up a quarter of mentors. Seventy percent of Dior employees are women.

The crisis has thrown off physical events — workshops were held each year to bring people together in person — and thrown the spotlight on the crucial role of education, she noted.

“The crisis has reinforced the crucial importance of education — and need for means. We joined the global coalition for education with Unesco to give means to continue teaching through digital tools,” said Favre, noting the staggering numbers of young people who don’t have access to education, a large proportion of whom are girls.

The [email protected] mentorship program launched its online learning platform dedicated to gender equality and women’s leadership for a responsible future in June. Participants in the program this year were assigned projects in small groups to come up with ways to promote autonomy of women in their communities.

“We told them to look within your country, your town, your village, how can you contribute to building a more just and equitable world, especially for women,” said Favre.

Some projects will be supported by Dior, she added, giving examples ranging from setting up coding classes for young women in universities to providing access to sanitary pads and tampons and other support for menstruating women.

“As a fashion house that is tuned in to trends and current events, along with our consumers, our clients, it’s a way to touch the evolution of society — in which we are stakeholders,” she said.

UNESCO officials stressed the importance of pooling resources across public and private sectors.

“Given the dramatic impact the crisis has had on education — as well as other sectors — we have a collective responsibility that forces us to bring together forces to come up with solutions, setting up education systems that are more flexible and agile, for example,” said Stefania Giannini, UNESCO assistant director general for education.

The private sector is one of the pillars of a system of international solidarity build around United Nations organizations, as “an active, productive member of society that takes on responsibility and contributes to concrete solutions,” she added, citing the involvement of technology companies in UNESCO’s efforts on the education front, and rethinking systems with infrastructure and free services.

With Dior, UNESCO’s partnership is about “co-creation,” said Giannini.

“We did these projects together, we co-created, we connected with the networks we have in all these 53 countries in the world,” she added. “The brand very well known, very positive, it can inspire young women, with values and concrete actions and shared responsibility, I think these are three dimensions that will give us new opportunities in the future, not just times of crisis.”

A thousand women from 25 countries attended the online meeting.

Fashion and luxury companies are increasingly communicating about their efforts on social and environmental fronts. LVMH last week outlined the group’s approach to protecting biodiversity during a conference with UNESCO.