Home » Lifestyle » 'Doctor Strange 2': What Does the Ending Mean for Agatha Harkness?

'Doctor Strange 2': What Does the Ending Mean for Agatha Harkness? 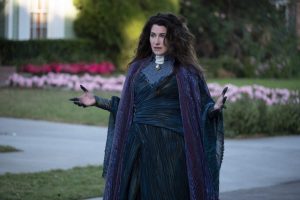 Doctor Strange in the Multiverse of Madness featured plenty of exciting cameos, from Patrick Stewart’s Professor X to Hayley Atwell as Captain Carter. Agatha Harkness (Kathryn Hahn) didn’t make an appearance in the Marvel sequel. However, it may have an impact on the WandaVision character moving forward. Specifically, Doctor Strange 2‘s ending could kickstart Agatha’s next storyline in the Marvel Cinematic Universe.

[Warning: Major spoilers ahead for WandaVision and Doctor Strange 2.]

Doctor Strange 2 has a tragic ending, especially for fans of Wanda Maximoff (Elizabeth Olsen). Realizing how the Darkhold corrupted her, Wanda seemingly sacrifices herself to destroy it. Not only does she eliminate the Darkhold in her universe, but she removes it from other realities as well.

Wanda’s actions have raised all kinds of questions about her future in the MCU. Fans never see a body in Doctor Strange in the Multiverse of Madness, so it’s possible she could return in a future project. However, the franchise wants us to think she’s dead — and she very well could be.

If Wanda is truly gone, her fate could have consequences that extend beyond Doctor Strange 2. In fact, the film’s chain of events could impact WandaVision‘s Agatha Harkness. Here’s how.

How the movie’s ending could impact Agatha Harkness

At the end of WandaVision, Wanda defeats Agatha Harkness using a spell that condemns her to the suburban life she was living in Westview. Thanks to Wanda’s power, Agatha doesn’t have the opportunity to use her own — thus, protecting those around her.

Of course, the ending of Doctor Strange 2 could undo the spell keeping Agatha Harkness contained. It’s unclear what happens to a Hex when the person who casts it dies. There’s a chance Wanda’s hold over Agatha will remain. However, it seems just as likely the spell could break. And that could unleash Agatha Harkness on the world all over again.

Knowing that Marvel has an entire series planned for Kathryn Hahn’s character, Wanda’s death offers a convenient way for her to return. So, could Multiverse of Madness lead into Agatha: House of Harkness?

Could ‘Doctor Strange 2’ lead into ‘Agatha: House of Harkness’?

With Doctor Strange 2 closely linked to the events of WandaVision, it seems likely that the movie will tie into Agatha: House of Harkness — either through its ending or because of Wanda’s story arc.

If Wanda really does die in the sequel, the ending provides a believable opening for Agatha to return. Lifting the Scarlet Witch’s spell would send her crashing back to reality — and leave her poised to stir up more trouble.

Even if Wanda is still alive, though, she could play into Agatha’s Disney+ series. During an appearance on Good Morning America, Elizabeth Olsen denied involvement with the project. Still, seeking revenge on Wanda could drive Agatha’s storyline forward. And after Spider-Man: No Way Home, we know actors aren’t always honest about their cameos in future projects.

We’ll have to wait to see what Marvel has in store for Agatha Harkness. In the meantime, fans can enjoy the continuation of Wanda’s story in Doctor Strange 2.

Doctor Strange in the Multiverse of Madness is currently playing in theaters worldwide.