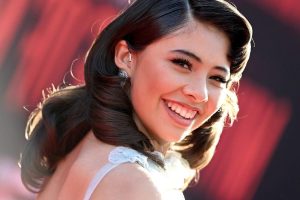 Doctor Strange in the Multiverse of Madness serves as a follow-up to Stephen Strange’s (Benedict Cumberbatch) 2016 origin story, but the film focuses on two other major characters. Both Wanda Maximoff (Elizabeth Olsen) and newcomer America Chavez (Xochitl Gomez) play prominent roles in Doctor Strange 2. And their scenes together gave Gomez the chance to learn from Olsen while the cast was filming.

Xochitl Gomez isn’t new to acting, but Doctor Strange 2 marks her first appearance in the Marvel Cinematic Universe. The star brings America Chavez to life, a beloved Marvel Comics character whose MCU debut was much anticipated among fans. And although there were mixed reactions to America’s storyline within Doctor Strange in the Multiverse of Madness, fans seem to be enjoying Gomez in the role.

Of course, entering any major franchise can prove an overwhelming task, as can bringing an already-popular character from page to screen. Fortunately, Xochitl got to learn from one of the franchise’s other heroines: Wanda Maximoff actor Elizabeth Olsen.

During an interview with Marvel.com, Xochitl Gomez opened up about joining the MCU — and she cited working with Elizabeth Olsen as one of the perks of working on Doctor Strange 2:

“It was having this opportunity and this bond with [Elizabeth Olsen], which was great because I got to watch her and I learned a lot from her. I got to study her and see how she would get into character and stuff like that. She’s just honestly mesmerizing. At the beginning, I didn’t know what to expect since I’m a newcomer. I would watch how she gets into character before she hears, ‘Let’s get ready.’ She takes a moment and gets into her headspace, and I was like, OK, I need to do that.”

Given how heavily praised Olsen’s portrayal of Wanda Maximoff has been, it’s no wonder Gomez wanted to pay close attention to it. And even though the film’s ending makes it unlikely that she and Olsen will appear in another project together any time soon, Gomez can take what she’s learned to her next MCU appearance.

So, will we see America Chavez again after Doctor Strange in the Multiverse of Madness? Writer Michael Waldron certainly seems to think so.

Will we see America Chavez again after ‘Doctor Strange 2’?

You don’t introduce a character as well known as America Chavez without having plans to continue her story. And during an interview with Screen Rant, Doctor Strange 2 writer Michael Waldron alluded to the future of Xochitl Gomez’s character in the MCU.

Specifically, Waldron addressed why there’s only one America in the multiverse — something he hopes will be answered in future Marvel projects:

“That’s a good question. And I think that’s the sort of thing that that I’d like to see explored in the next chapter of America’s story. Clearly, she’s a very significant being in the universe. Whether you want to call her a Nexus Being or whatever. I think that’s all stuff that’s up for grabs as we continue to explore her story.”

When fans could see America again is a trickier question. As of right now, there’s no word on when Gomez will appear again. Of course, surprise cameos are par for the course with this franchise. So, we might not know until it happens. We’ll certainly be keeping our ears open for any news of America’s next adventure. In the meantime, fans can catch her introduction in Doctor Strange 2.

Doctor Strange in the Multiverse of Madness is currently playing in theaters worldwide.