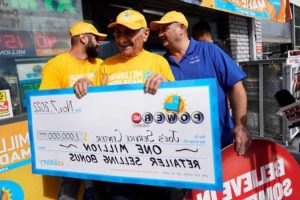 As the owner of Joe’s Service Center gas station in Altadena, CA, Joe Chahayed (Peko’s father-in-law) gets a $1 million reward for selling the ticket.

RELATED: 15 Biggest Game Show Jackpots And The Answers That Won Them

A jackpot-winning Powerball ticket was sold in California for the record $2.04 billion grand prize, according to lottery officials.

The grand prize has an estimated cash value of $997.6 million.

According to Fox Business, One ticket sold in Florida won the Power Play Match for a cash value of $2 million. Twenty-two other tickets sold across the country won the Powerball Match for $1 million prizes.

Monday evening’s Powerball drawing was delayed for nearly 10 hours until Tuesday morning because a participating lottery had issues processing sales.

The association said it was against its policy to say which lottery had the delay.

No one has matched all five white numbers plus the red Powerball in 40-straight drawings.

The jackpot won on Tuesday was by far the largest lottery jackpot ever won, topping the previous record $1.586 billion prize won by three Powerball ticket holders in 2016.

Powerball requires all 48 participating lotteries to send in key information before the drawing, the statement said.

“Powerball has stringent security requirements to protect the integrity of the game and remains committed to holding a drawing that gives all players a fair chance to win,” it added.

The Minnesota Lottery took responsibility for the delay, saying in a statement that “after unprecedented lottery interest, Minnesota’s lottery sales verification system caused a processing delay.”

“The delay was necessary to confirm the Powerball drawing could be conducted securely and accurately,” the statement added. “At no time was the integrity of the process compromised.”

The winner will choose between receiving the $2.04 billion in 30 payments over the next three decades or taking a lump sum of $997.6 million all at once.

The association upped the number of those white balls that fill the tumbler from 59 to 69, which doubled the combinations of white balls, The Post reported. Odds of winning the jackpot went from 1 in 175 million to 1 in 292 million. But the group did make it easier to win non-jackpot prizes, by decreasing the number of red Powerball balls to 26 from 35 — jackpot winners must correctly guess five numbers and the final red ball.

Tuesday’s drawing was the first since Aug. 3 to have a player win the jackpot, after 40 straight drawings without a big winner. It tied the previous high for longest stretch without a jackpot winner, which ended in November 2021 with a jackpot of nearly $700 million, per Washington Post.

READ NEXT: Drake Postponed His Show At The Apollo To Pay Respect To Take Off