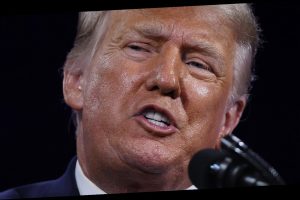 This year’s Conservative Political Action Conference in Orlando was more than just a conference for many attendees — it was a chance to hear their political idol Donald Trump speak IRL once again, after a month-long absence from the limelight punctuated by his historic second Senate impeachment trial, and he didn’t disappoint them.

After repeating his claim that he won the 2020 presidential vote, Trump told supporters he might run again in 2024 (confounding his niece’s Mary’s prediction that he wouldn’t throw his hat in the presidential ring a second time). He also shot down predictions that he would start a new party because he wants to stick with the GOP, so that he could combat what he called “Democratic socialism which we know leads to communism” (via The Orlando Sentinel).

Trump moved on to laud the “incredible journey” that he and his supporters had been on, that they would rise once again, and that there were a list of people that had earned his special brand of disdain, including Utah Sen. Mitt Romney and Wyoming Rep. Liz Cheney. He also heaped plenty of criticism on his successor, incumbent President Joe Biden, for his immigration policies (via CNN).

Trump called on skeptical Republicans to get vaccinated

While CPAC audiences got a chance to hear about Trump’s plans for the 2024 election cycle, they may have also gotten a chance to hear something they didn’t expect, because Trump also urged everyone in the crowd to get the COVID-19 vaccine shot. As proof, he pointed out that Biden got himself vaccinated, and that “it shows you how unpainful that vaccine shot is” (via The Washington Post).

The former president isn’t keen on vaccines as a whole, as he told crowds in 2015 (via The Washington Post), but there is a potentially self-serving reason for this about-face. There is a huge disparity in the number of Democrats and Republicans over the COVID-19 vaccine; one poll shows 72 percent of Democrats saying that they were either planning or already had the vaccine, while four in ten Republicans say “they will avoid ever getting the vaccine if they can” (via the Monmouth University Polling Institute).

A majority of Republicans across the country don't want the vaccine

This finding bears out in other studies made, too. In the state of Colorado, only a head-turning 29 percent of Republicans have told polling group Magellan Strategies that they want the vaccine (by extension, 71 percent don’t). Meanwhile, 89 percent of Democrats are waiting for their turn to get vaccinated, as are 57 percent of independent voters. Those who are against the vaccine say they don’t trust the science behind vaccine development, they think the shot is unsafe, and one said that if the recovery rate for COVID is at 98 percent, a vaccine isn’t necessary (via The Colorado Sun).

The Monmouth University Polling Institute’s Director Patrick Murray has pointed out that: “Reluctance to get the vaccine is driven more by partisanship than any single demographic factor. It says a lot about the depth of our partisan divide that it could impact public health like this.”

The Monmouth poll also shows one important factor: that a third of Republicans feel incumbent President Biden has what it takes to get the virus under control. It may not sound like much, but Murray points out that it could count as “overwhelming bipartisanship,” given how divided the U.S. political ecosystem is today. If this trend over the COVID-19 vaccine continues, it could result in plenty of very sick Republicans.