Home » Lifestyle » ‘Don’t Be Tardy’: Kim Zolciak & The Biermanns Come Face To Face With Ghosts In A Haunted House

‘Don’t Be Tardy’: Kim Zolciak & The Biermanns Come Face To Face With Ghosts In A Haunted House 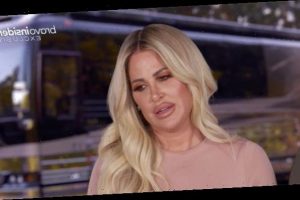 This week’s new episode of ‘Don’t Be Tardy’ was a good one as a lead-in to Halloween since the Biermanns encountered terrifying ghouls and ghosts in a haunted house.

Kim Zolciak was forced to hold onto her wig this week, as the Biermanns traveled to the most haunted house in the country during the Oct. 20 episode of Don’t Be Tardy. It was actually Kroy Biermann‘s idea to go, and it wasn’t well received by Kim or their kids. Especially because Brielle Biermann is so afraid of ghosts that she still sleeps with her little sister most nights.

“Driving to St. Louis as a little kid, my uncle, who lives there, would tell me all kinds of crazy ghost stories and [talked about St. Louis] kind of being a very haunted place. And so I learned a little bit about a haunted house that is supposed to be the most haunted house in the area, and I’m going to take Brielle and Ariana [Biermann] to see if we can’t scare the s*** out of them,” Kroy said alongside Kim during their private confessional.

Brielle went on to tell Kroy that she believes demons are real, so she didn’t want to participate. “Nothing really freaks me out except for demons. If they like take over your body, then you’re just screwed. I feel like something’s watching me all the time … me and haunted houses — we don’t mix,” Brielle said during her own confessional.

But despite Brielle’s initial hesitations, she went with her parents to the haunted house. And once inside, Kim, Kroy, Brielle and Ariana came across a spirit, whom they believed might have been one of Kroy’s best friends who passed away in a car accident. It was a somewhat pleasant experience, but the Biermanns were still quick to exit the haunted house and made sure to ask all the ghosts to demons to not follow them home.

END_OF_DOCUMENT_TOKEN_TO_BE_REPLACED

END_OF_DOCUMENT_TOKEN_TO_BE_REPLACED
We and our partners use cookies on this site to improve our service, perform analytics, personalize advertising, measure advertising performance, and remember website preferences.Ok