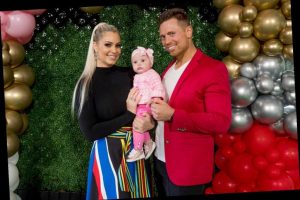 Miz & Mrs is coming back this spring!

WWE superstars Mike "The Miz" and Maryse Mizanin "are back for more Mizchief, mayhem and madness" in the second half of season 2, premiering this April — and PEOPLE has an exclusive first look.

The network dropped a hilarious teaser for the upcoming episodes, which give a glimpse into the "luxurious lifestyle" of the Mizanins. Within the first few seconds of the new trailer, fans see Mike, 40, surprise his wife with a "vasectomy reveal party."

RELATED: Mike 'The Miz' Mizanin Says He and Maryse Are '100 Percent Entertainment Company' for Their Kids According to an official press release, the new episodes of the hit reality TV show will also show Mike and Maryse "celebrate an anniversary, have a pregnancy scare, and think about joining a country club."

"While that is usually more than enough for a family to navigate, their moms decide they are ready to date, Mike creates a man cave and helps his dad find a hobby, and Maryse launches her Volition Beauty Yaupon Tea Glow-Awakening Moisturizer," the release adds.

In November, the couple opened up to PEOPLE about filming the show, with Mike saying they're "just really excited" that the Total Divas spin-off would be making a return for a second season. "If you want to laugh, if you want something to escape your reality, enter ours, and just sit there with your entire family and look how ridiculous our family is," Mike told PEOPLE. "And then look at each one of your members of your family and go, 'We did that. Or we would never do that.' Or 'something like that has happened to us.' That's the type of things that are going to happen on our show and then some."

RELATED: Mike & Maryse Mizanin Tease New Episodes of Show: 'If You Want to Escape Your Reality, Enter Ours'

Maryse added that loves the extra time filming the series affords her to be with her young children.

"I get to see my kids at all times, and I want to see them at all times. I do really bad being away from them for 30 minutes," she said. "Being a mom of two, obviously, I cannot be on the road with WWE like I used to be. We used to be on the road 275 days a year, if not more. I kind of do miss that lifestyle sometimes, but I love being with my kids."

She added, "I've never seen my mom and my family more since filming Miz and Mrs, because I used to be always gone. So, this kind of brought my family together."