Home » Lifestyle » Downton goes to Hollywood …and the French Riviera!

Downton goes to Hollywood …and the French Riviera! 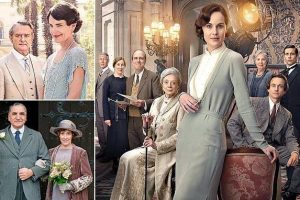 Downton goes to Hollywood …and the French Riviera! As the Carsons get a taste of glamour in the new Downton Abbey film, Jim Carter and Phyllis Logan recall how they took to the high life

After six series and a hugely successful spin-off film, Downton Abbey’s downstairs staff finally get a proper taste of the glamour enjoyed by the upstairs characters in the highly anticipated second movie Downton Abbey: A New Era.

And no one deserves it more than Britain’s favourite married servants Mr and Mrs Carson (nee Hughes), the loyal butler and head housekeeper to the Crawley family – although they get it in very different ways.

The first movie, released in 2019, four years after the TV series ended, was a box-office smash, raking in more than £150 million. But it left us with a cliffhanger ending – the Dowager Countess, played by Dame Maggie Smith, was told she may not have long to live, raising fears her pithy putdowns wouldn’t grace this sequel.

But fans will be pleased to know she’s back along with the other Downton stalwarts including Hugh Bonneville as Lord Grantham, Elizabeth McGovern as his wife Cora, Michelle Dockery as their daughter Lady Mary, Sophie McShera as assistant cook Daisy and Lesley Nicol as head cook Mrs Patmore. 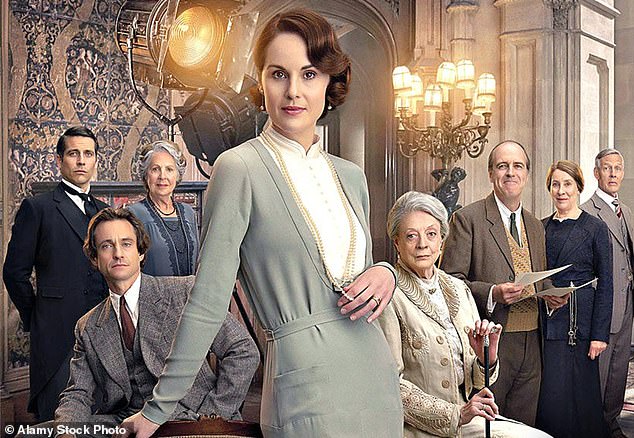 Downton Abbey’s second movie A New Era is getting a taste of glamour. Set in 1928 the new film involves a trip to the South of France and a wedding

The film, set in 1928, nine months after the first movie, involves a trip to the South of France and a surprise wedding, and sees a Hollywood film crew take over the abbey. Indeed it’s the Dowager Countess who instigates the jaunt to the Med when she casually reveals she’s inherited a villa from an old suitor.

‘They’d better be warned, the British are coming,’ teases Carson, one of only three staff permitted to pack their bags for a stay at the Villa of the Doves on the French Riviera for the ‘grandest escape of the year’.

The villa is luxurious enough to give the abbey a run for its money, and the Crawley family spend the trip zooming along the coastline in speedboats, schmoozing new lovers on the sands and attending extravagant bashes. But how does stickler Carson cope with the upheaval?

‘Carson can’t cope with electricity or a fridge, never mind the French,’ says Jim Carter, who’s played the grumpy butler since the TV series began in 2010. 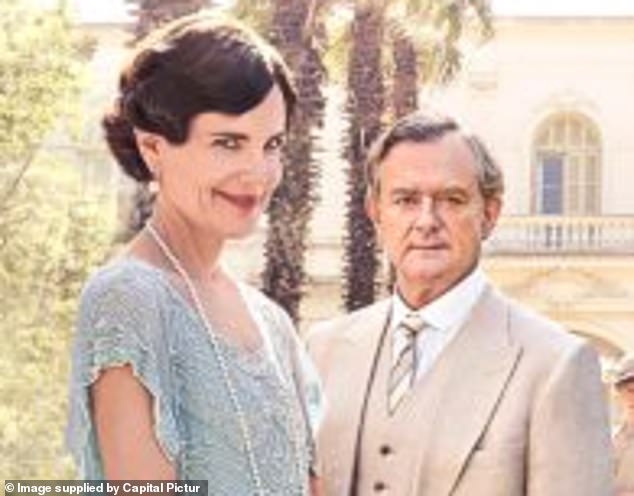 ‘So going to France, which is full of French people with dubious eating habits, is tricky for him. He’s appalled at what they eat because he’s old-fashioned in that way.

‘There’s a bedroom scene with Mrs Hughes [the character decided to retain her original surname while still working] before he goes, where she’s starting to fall asleep and I’m reading – in horror – a travel guide to France. That’s about as sexy as we get.

‘You hear Carson talking about how he can’t believe what he has to go through, having to teach these French servants how to behave. While he’s there he insists things will happen in the English manner, so he refuses to acknowledge the heat and ends up sweating profusely in his starchy clothes.’

You might wonder why Carson has been dispatched to France, given that usually it’s only the maids and valets who travel with the Crawleys when they depart for holidays in Scotland.

A CHERISHED MOMENT WITH LADY MARY

Butler Carson has been described by Julian Fellowes as the ‘father of Downton’, and it’s true that he loves Lady Mary like a daughter, although he has confronted her on many occasions.

And fans will be pleased to know this special relationship continues in A New Era.

‘Carson is Lady Mary’s downstairs father – she can say things to him that she can’t say to her real father,’ says Jim Carter.

‘In the new film there’s a typical Carson and Lady Mary moment of tenderness.

‘It’s my favourite scene in the film and one that I cherish.’ 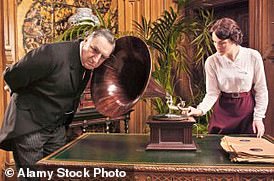 Butler Carson has been described by Julian Fellowes as the ‘father of Downton’, and it’s true that he loves Lady Mary (pictured)

‘The plan of getting Carson to go to France is rather spurious,’ says Jim, 73. ‘They want him away from the house where there’s upheaval that they know he won’t cope with.

‘It was an odd experience because I only did a couple of days filming in England with Phyllis [Logan, who plays Mrs Hughes] and I hardly saw any of our downstairs gang while I was in France being sweaty.’

Back home Mrs Hughes experiences her own taste of the high life when she’s left holding the fort while a Hollywood film crew descends on the abbey. ‘We need to persuade the servants to take Carson with them so he’s out of the way,’ laughs Phyllis.

‘But Mrs Hughes needs to be there – the last thing in the world she would want is to leave the house unattended.

‘She doesn’t look like a woman of the world, but for that time she’s a bit more forward thinking than others of her age. So she’s quietly entertained by the whole spectacle of the film crew and cast, and certainly more tolerant than Carson would have been of the invasion.’

Leading that invasion are Dominic West as Guy Dexter, the dashing star of the movie – one of the first ‘talkies’ after the silentmovie era – and Hugh Dancy as the film’s director Jack Barber.

Even though Lady Violet refuses to be swept up by the glamour of the film set (‘I should have thought the best thing about films is that you can’t hear them; even better if you couldn’t see them either,’ she says at one point), the other characters feel differently.

‘Daisy is thrilled that these famous people who she sees in the magazines are in our house, and it’s lovely for Mrs Hughes to see the delight of the downstairs staff,’ says Phyllis, 66.

‘It’s a bit out of their comfort zone but they get to be so involved.’ Jack Barber has his work cut out keeping his actors in check – in particular Myrna Dalgleish (Laura Haddock), who’s prone to throwing tantrums. ‘But Daisy ends up having rather a nice relationship with her says Phyllis.

‘They come to an understanding because Myrna starts off being a bit up herself and dismissive of the staff, even though she comes from scum, the same as the rest of us.’

But what of the Carsons, who had possibly the slowest-moving romance ever seen on screen?

Their feelings for each other first became apparent in series three in 2012 after Mrs Hughes’s cancer scare – having been told that the lump she’d found was benign, she’d heard Carson singing happily for her good health. Carson finally proposed to Mrs Hughes in the 2014 Christmas special. 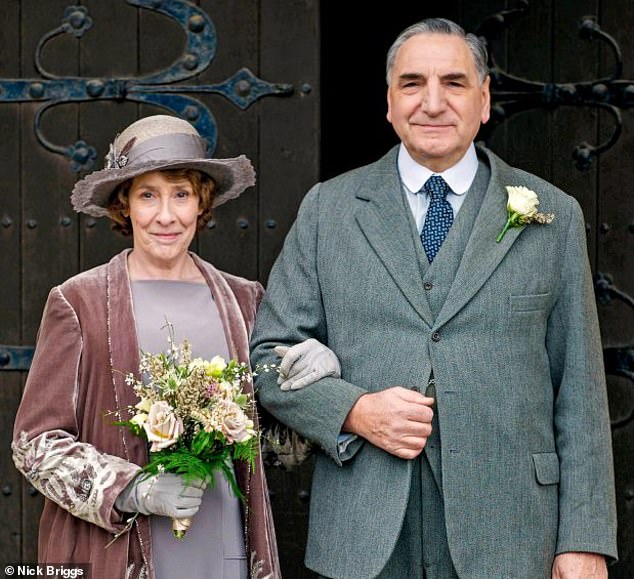 Phyllis and Jim as the Carsons at their wedding. Their feelings for each other first became apparent in series three in 2012 after Mrs Hughes’s cancer scare

Writer and creator Julian Fellowes hadn’t initially intended for the couple to tie the knot, but Phyllis, who’s married to actor Kevin McNally, says fans had been aware of her romance with Carson before she was.

‘Jim kept saying to me that people in the street would say to him, “When are you and Mrs Hughes going to get together?” I didn’t think it would work but when I read Julian’s scripts about the lead-up to it, I thought, “It’s beautiful, so yes this has to happen.”’

Jim, who’s now working on a new film about the young Willy Wonka, agrees. ‘Carson and Mrs Hughes would enjoy a sherry together at the end of the day, and we both relished those moments.

‘Phyllis and I work well together and we’re fond of each other. So that helped inform the chemistry of the longest-burning romance in TV history.’

His real-life wife Imelda Staunton appeared in the first Downton Abbey movie, as Lady Maud Bagshaw. ‘Imelda had heard me wittering on about Downton for years so for her to be part of it was good.

‘She said to me one day, “I’ve got this script and I’m playing an aristocrat.” And I said, “Oh yes, lovely.”

‘Then she said, “In Downton Abbey!” As she was upstairs I knew our relationship would be limited in the film but it was nice to travel into work together, even if Carson refused to refill Maud’s wine glass.’

So are Mr and Mrs Carson still living happily ever after in A New Era? ‘We’re very happy we got together, but now there’s a bit more carping and sniping between the characters, which is a classic marriage,’ laughs Phyllis.

‘Mrs Hughes loves Carson because he has great attributes, but she also has to accept he’s a bit of an old curmudgeon.’

Both actors say they’re a world away from their characters. ‘Carson is a slave to routine and lives his life by dressing for dinner but that would drive me insane.

‘I hate routine,’ says Jim, while Phyllis says she ‘very much disassociates’ herself from Mrs Hughes.

‘I’m not often recognised like Jim as he’s tall with big eyebrows, but I do get recognised by my Scottish voice – even when I’m ordering a coffee with a mask on,’ laughs Phyllis, who’s now working on a plane crash thriller called No Way Up with Kelsey Grammer.

‘But I just love being Mrs Hughes – the character has been such a gift so I don’t mind if it ends up being my defining role.’