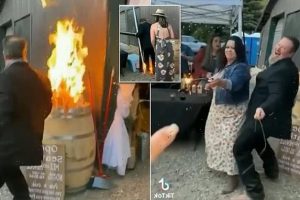 Burning up the dance floor! Shocking moment ‘drunk’ wedding guest sets FIRE to the venue with a sparkler while grinding on a woman to ‘I’m Too Sexy’ – before putting the flames out with his feet and continuing his dance

A ‘drunk’ wedding guest has become a viral sensation after he was caught on camera setting fire to the venue while gyrating on a woman with sparklers in his hands.

Video footage taken at a wedding ceremony, which is understood to have taken place in the US, captures the moment a bearded guest at the event nearly brought the entire event down in flames – before putting out the fire with his bare hands and continuing with his dance.

The clip begins with the unnamed man – who was dressed in a black suit and green shirt – walking out of the venue with two sparklers in his hands, while bopping along to the 1992 hit ‘I’m Too Sexy’.

He then proceeds to make his way over to a fellow wedding guest, whom he begins grinding on while waving his sparklers in the air.

At this point, he hits a nearby floral centerpiece with his sparkler, setting the entire arrangement alight, much to the horror of everyone around him. 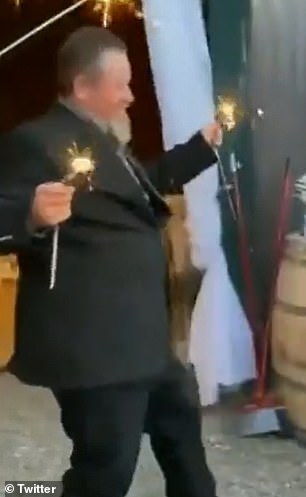 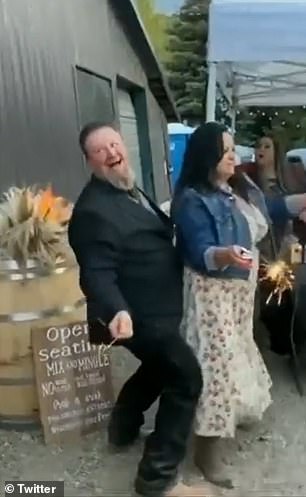 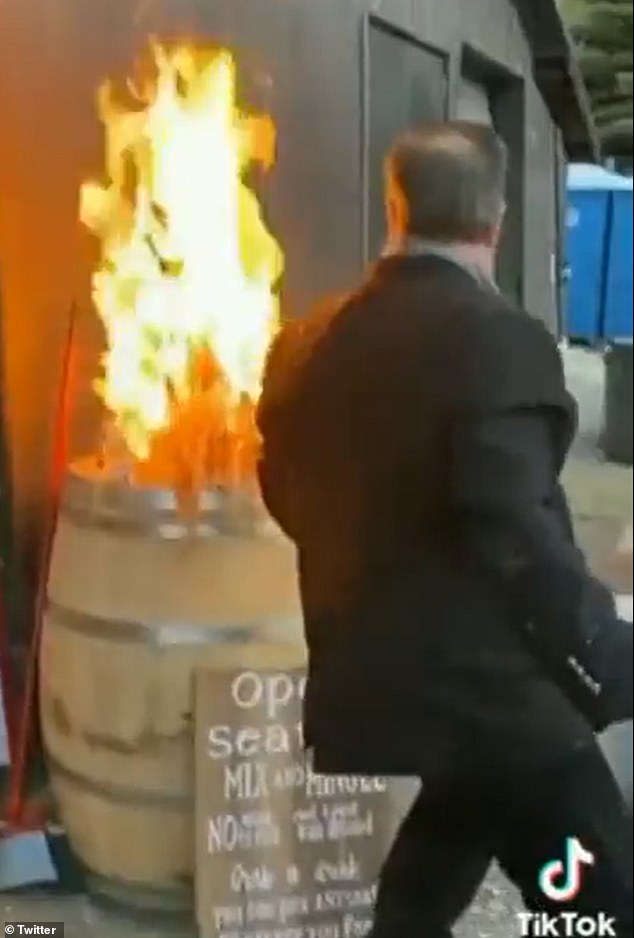 The grass centerpiece went up in flames and the man continued to dance while other guest screamed, ‘Fire! Fire!’

At first, the man appears to be blissfully unaware of the chaos he has caused, and he carries on dancing along to the beat of the music, while guests around him begin to yell, ‘Ah! Fire! Fire!’

While others dash around in an apparent effort to find water or a fire extinguisher – with one woman yanking a billowing white curtain out of the way of the flames – the man finally spots the anarchy unfolding alongside him and stumbles towards the flaming flowers – but only after gyrating a few more times for the camera.

Seemingly unfazed by the increasingly large flames that are licking up the side of the wedding venue, the man begins swiping at the center piece with his arm to move it onto the floor, where he then proceeds to stamp on it with his feet until the flames were extinguished.

Miraculously, the dancing guest managed to put on the flames without setting himself on fire in the process – and he then carried on dancing to the music, much to the shock of his fellow wedding guests, who were gathered in a circle around him.

However, a woman in a hat quickly brought his spirits down when she snapped at him and instructed him to ‘settle down.’

The original video was posted to TikTok but has since been deleted, the video was then shared to Twitter where it has gone viral with over 11 million views and 380,000 likes.

Although the man has yet to be identified, social media users have branded the man who smothered the fire with his fingers their hammered hero.

The video was shared with the caption: ‘This is how drunk I’m tryna be at my  wedding.’

‘That man was having the time of his life while everybody was screaming,’ added another user.

‘Bruh looked at them flames like they challenged him to a dance battle,’ tweeted another user.

Another social media user added: ‘when you’re the problem and the solution.’