Dua Lipa unleashes a euphoric spectacle for the ages 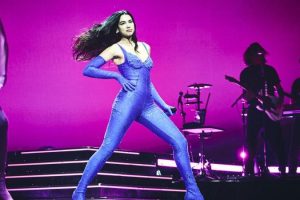 The story of British pop star Dua Lipa’s Future Nostalgia concert could just be a bunch of synonyms for “feelgood” strung together with the names of songs so uniformly earwormy they populate your brain afterwards in an indistinguishable swirl.

We already knew Lipa had the tunes. Levitating is one of the great disco jams with the kind of age-spanning ubiquity that lifts hearts in sweaty clubs, on pre-school dance floors, at Mardi Gras parties and on family road trips alike. Four more singles from Lipa’s 2020 Future Nostalgia record reached platinum single status in Australia, while a fifth (Hallucinate) reached gold. 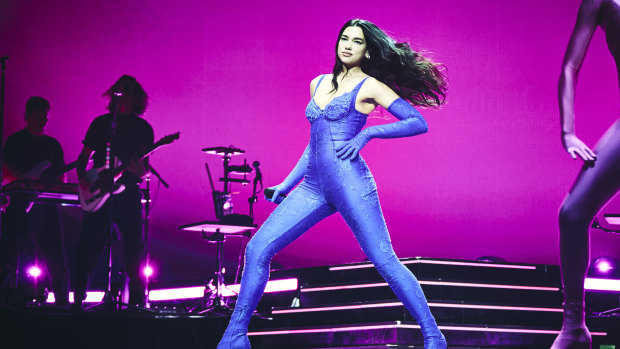 Bar the pre-schoolers, all those demographics are here. In Lipa’s only address to the crowd that isn’t a variation on “Make some f —ing noise, Sydney”, we discover that her final pre-pandemic show was Sydney Mardi Gras in 2020. “It was such a crazy, scary feeling,” she says of what followed.

There are no crazy, scary feelings tonight, or presumably at any of the 88 shows Lipa says she’s played this year. Her show is a euphoria-only zone that provides a different sugar-rush spectacle for each song, aided by dazzling visuals, dancers, glittering costumes, cartwheeling roller-skaters, back-up singers, live drums and guitars.

Sheathed in a deep-blue catsuit capped with matching opera gloves, Lipa is already deep in diva territory on her knees with outstretched arms for the first song, Physical. The 2017 song that shot her slinkily to fame, New Rules, is next, during which her crew twirls holographic umbrellas.

Sets two and three forgo polished pop for deep and clubby terrain, as Lipa opts for remixed versions of Boys Will Be Boys and Hallucinate. Though it’s during the one-two punch of One Kiss and Electricity when things go genuinely bananas, delivering on some classic hold and drop-the-beat ecstasy.

The set is capped off by Elton John’s face blooming rather goofily on the screen for their duet, Cold Heart. Lipa and crew unfurl a gay pride flag and – in a rare un-choreographed moment – sling their arms across each other’s shoulders group-photo style, throw some heart signs and soak up all those good, good vibes.