The day which you are paid your benefit changes if it falls on a Bank Holiday, and there are two of them over the Easter break. Every year, the Easter dates change but this year Good Friday and Easter Monday will be on April 19 and 21.

Most benefits, including Universal Credit, are paid on the last working day before your payment date if it falls on a weekend or a public holiday.

This may mean you're paid either four days or 24 hours before you expect it.

Remember, being paid early means that you will have to make your cash stretch for a few extra days at the end of the month so it's important to budget.

Here's when you can expect to get your benefits over Easter:

Tax Credit, such as Working Tax Credit, is a payment that helps boost your income if you're working standard hours but not earning enough to live off. 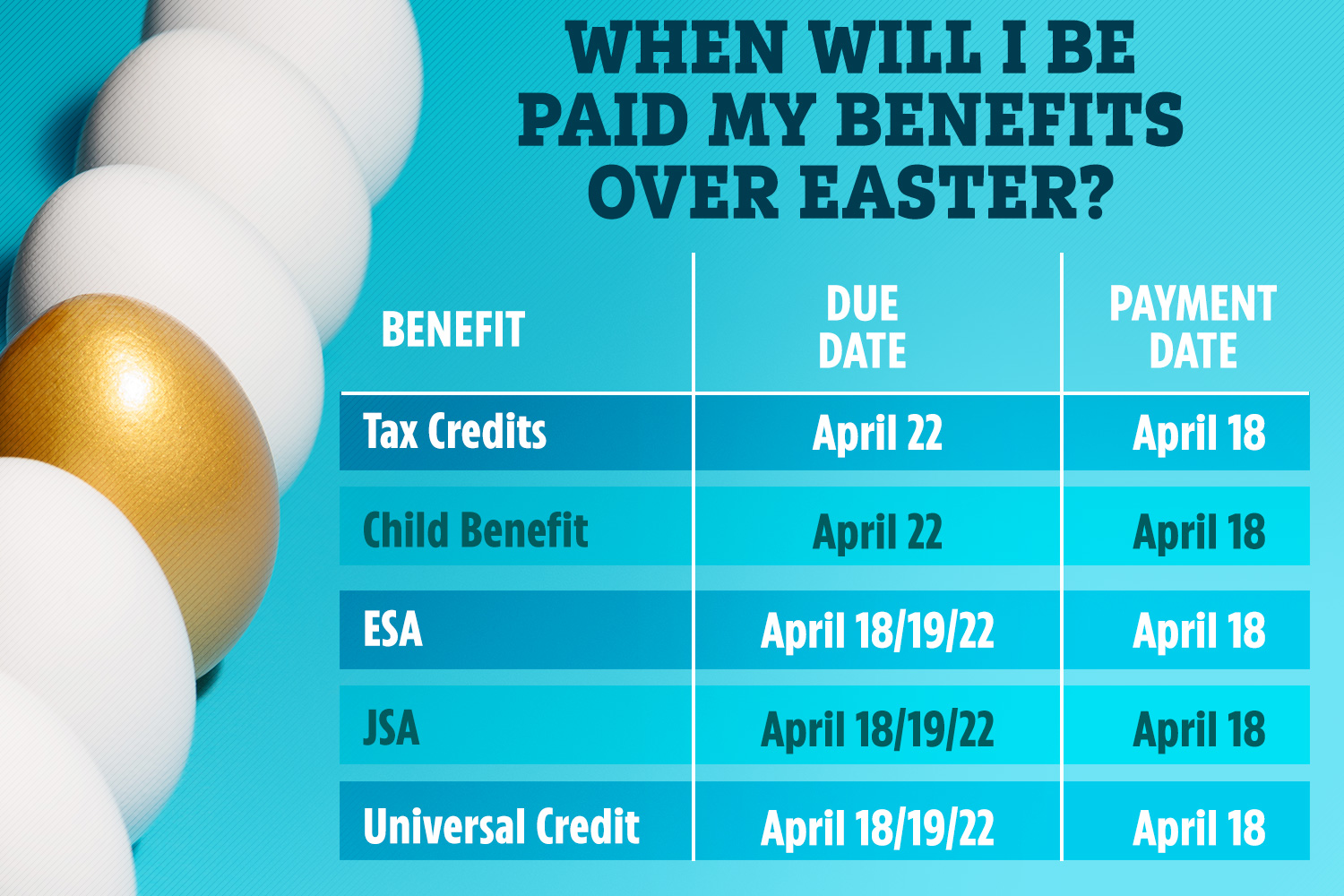 You can choose to get your tax credits every week or every four weeks.

Those who expect to receive their payments on either April 19 and 22 will instead received them on April 18.

You can claim Child Benefit if you're responsible for more or one children under 16 or under 20 if they stay in school or are in an apprenticeship.

Usually it is paid every four weeks on a Monday or Tuesday, but you may get it paid weekly if you're a single parent or one of you is claiming other benefits like Income Support.

If you're due to get your payment on April 19 then you will get your money the day before on April 18.

Are you entitled to child benefits?

The oldest child receives £20.70 per week and any subsequent children receive £13.70 per week.

If you or your partner earns more than £50,000 you may have to pay a tax charge in order to receive it which is called the ‘High Income Child Benefit Charge’.

If you or your partner receives £60,000 or more per year, the charge for receiving child benefit is the same as the total amount of child benefit you're eligible for.

You can find out exactly how much you’re entitled to with the Government’s free child benefit charge calculator.

Payments that are due on April 22, the Monday, can expect their payment four days earlier on Thursday April 18.

Normally, you can work out when you're next going to receive child benefit by counting four weeks from your last payment but this doesn't apply if you've been paid early because of a Bank Holiday.

If your last instalment was moved because of the public holiday, you'll have to count four weeks from your usual payment date.

If your payment is late, double-check your payment date and contact your bank before calling the Child Benefit office.

Employment Support Allowance (ESA) is a payment made to those who are unable to work or need personalised help with their job because of an illness or disability.

You can claim the benefit whether you're employed, unemployed or self-employed.

Jobseeker's Allowance (JSA) is a payment made to those who have no source of income while they looking for work.

Both payments are usually made every two weeks.

If you are normally paid on either April 19 or 22 then you can expect the money to reach you on April 18.

Universal Credit is the Government's new benefit system that rolls six benefits into one.

You're likely to be one of the millions of people who are on the scheme if you submitted a benefit claim in the past couple of years.

Claimants are usually paid on the same day every month.

Your payments won't be delayed over the Easter period and instead you'll be paid early.

If you're due to be paid on the Friday or Monday then you will get your payment on the Thursday before which is April 18.

Universal Credit has been controversial ever since before it's roll out in 2015, particularly because of a crippling five-week waiting period before claimants get their first payment.

That's why The Sun is running a campaign to Make Universal Credit Work calling on the Government to slash it down to just two weeks.

We also want parents to get the 85 per cent of the money they can claim for childcare paid upfront and the work allowance to be reduced.