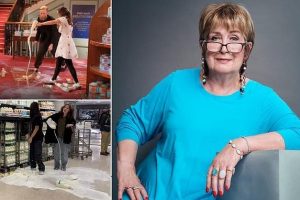 On Sunday night I watched the final episode of David Attenborough’s Frozen Planet II. It was terrifying. In his quiet, authoritative manner he took us through the melting ice in the Arctic, Antarctic and on the peaks of the planet’s highest mountains.

We watched courageous scientists measuring the frightening speed of the melt. We saw tiny penguins shivering and dying because they cannot survive in a wet climate. We watched desperate polar bears trying to find food.

We were shown how all of humanity will suffer as sea levels rise. (Suddenly a house by the sea is not so attractive a proposal.)

I was so moved by David’s plea that we must do something, and must do it now, that I found myself checking my rubbish to make sure anything that could be recycled was in the right bin. I walked to the shops instead of taking the car and made serious inquiries about swapping my petrol-driven Mini for an electric one. 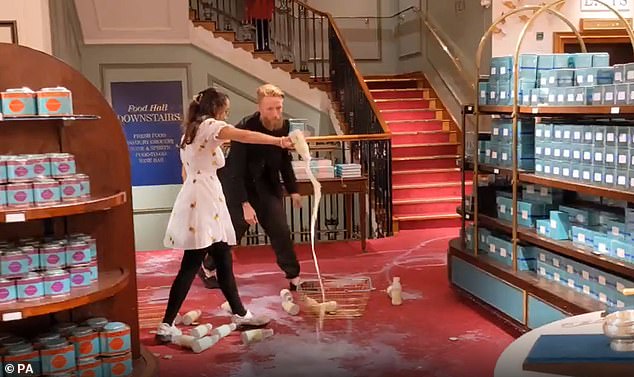 I decided to plead with the council for more charging points in every street. I’ve also begun inquiries about solar panels.

Attenborough’s warm, worried, scientific approach made me more determined than ever to do my bit.

What an utter contrast to the idiotic new crop of eco protestors — who make me furious at their antics because they are achieving exactly the opposite of what they claim to want.

What do they suppose will be the reaction when they glue themselves to a road, preventing people from getting their children to hospital? How many of us are going to be fired into doing something when protesters suspend themselves from the QEII bridge, shutting down the M25 for a whole day? I’d be amazed if it changes anyone’s mind — except perhaps to make them ignore the whole thing altogether. 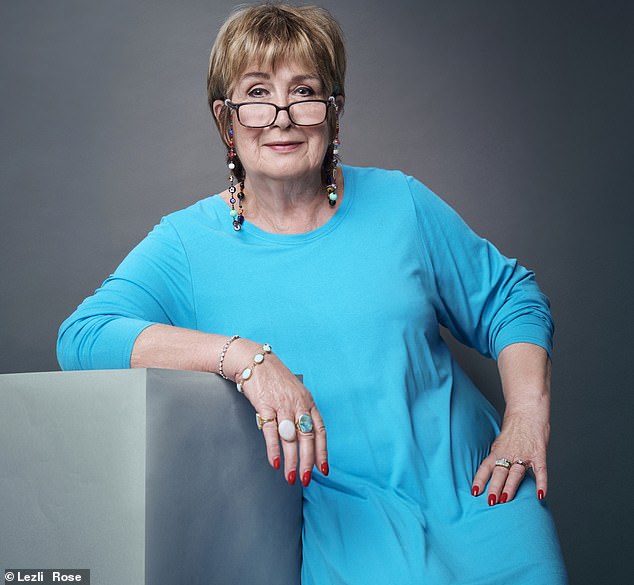 Jenni Murray (pictured) is frustrated with eco protestors new techniques for attention. UK-based writer fears that they will go too far and affect people’s day badly

And who thought it might be persuasive to throw milk all over the floor of Fortnum & Mason and other supermarkets in an effort to persuade us all that cows and their methane are not good for the climate? Their impact on me was to go out and buy another pint or two, make another delicious café latte and remind myself of information I received about milk when researching my book on the menopause.

How, I asked, can one avoid the potential damage to the bones and the threat of osteoporosis? What’s the best way to get calcium into the body? Milk, said all the specialists. Just drink milk.

I did and I have no shortage of calcium. I have no concerns about consuming a perfectly healthy product. The dairy industry needs support and I’m sure one day science can find ways of helping the cows not to fart so much.

What thoughtless, unimaginative young people these protesters are. How can it help to throw a vital product all over the floor — and leave it to the no-doubt overworked and underpaid shop assistants to clean it up? 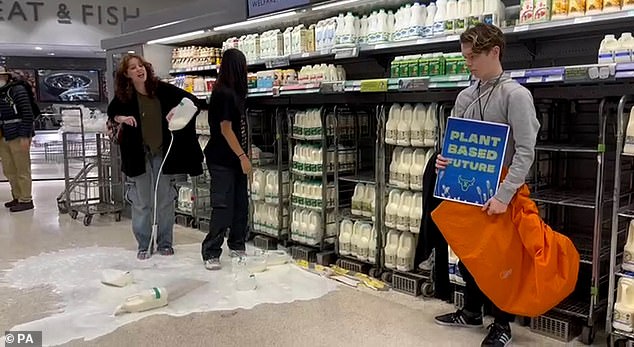 Jenni asks who thought it might be persuasive to throw milk all over the floor of Fortnum & Mason and other supermarkets in an effort to persuade us all that cows and their methane are not good for the climate?

Of course, that’s nothing on the scale of criminal damage aspired to by the eco idiots. There was the attack on the National Gallery by Just Stop Oil protesters who threw tomato soup at Van Gogh’s Sunflowers, worth £76million.

Perhaps they are too uninterested in anything but their own moment in the spotlight to realise that this is not a new way of making a fuss. Its total failure is well documented.

In 1914, the suffragette Mary Richardson slashed Velazquez’s Rokeby Venus in an effort to destroy the painting of the ‘most beautiful woman in mythological history’. Even the most ardent feminists were appalled that their cause should lead to such wanton destruction and her action had the opposite effect to what she had hoped for.

At least Venus was able to be repaired — and the gallery seems since to have learned that popping some protective glass over a priceless work of art is rather a good idea. Sunflowers was not damaged by the soup.

It’s a source of astonishment to me that it’s not just hot-headed young people enacting these protests. There seems to be no split among the generations. Young and old are trying to make their point by gluing themselves to roads, wasting milk and throwing soup, but regardless of the maturity or otherwise of the eco warriors, they should all realise that their destructive and damaging actions will not win support.

If you’ve been stuck in traffic, unable to complete your journey, you’re not thinking of your recycling bin, you’re just wondering why on earth the police are not dealing with these morons.

The effects of climate change are deeply worrying and I believe we can all do something about that if we try. But these protesters will not bring us with them, because they fail to understand basic human psychology. Punishment creates only anger and resistance.

Information and science are persuasive. It’s called Show And Tell; it’s the Attenborough way and it’s persuaded me.

Something fishy about this frock 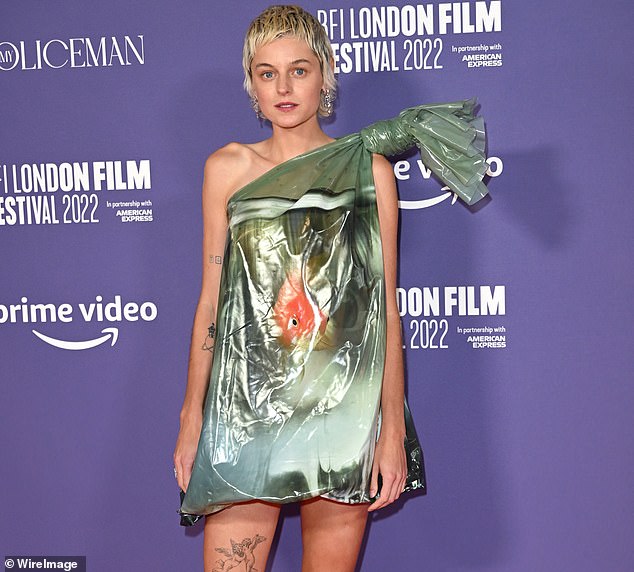 Emma Corrin wearing JW Anderson’s goldfish in a plastic bag dress. Jenni Murray was not a fan of this look

It’s not unusual to see Emma Corrin wearing outrageous fashions, but, really, a mini dress that looks like one of those bags you win with a live goldfish in it? As a child, my parents would take me to the fair, I’d win one of the games and be offered a goldfish. I always said no. How horrible it was to see a fish in a plastic bag with very little water. It’s shocking for a movie star to parade in a frock representing such cruelty.

I can’t stomach the King’s sandwich 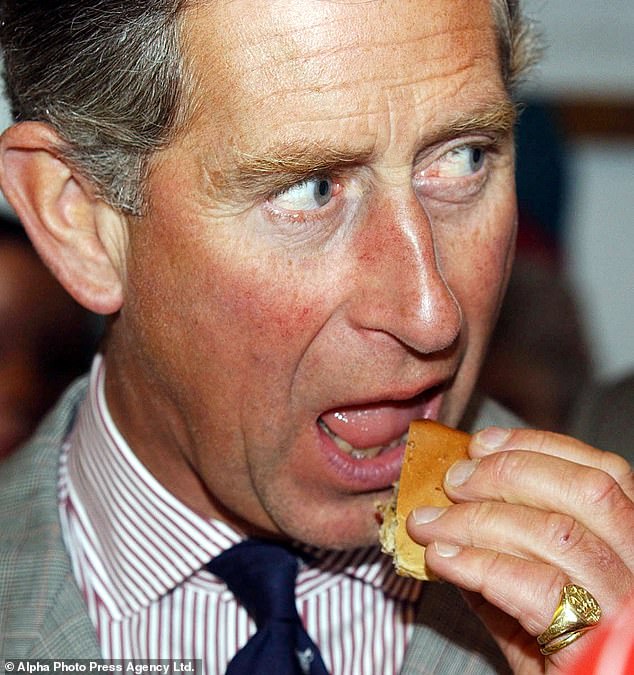 King Charles tucking into his favourite sandwich – a granary bap with a fried egg, Gruyere, Pesto and Marmite

King Charles must have access to the very best in catering, but should we be worried about his somewhat strange taste? At Chatsworth House, the chef was reportedly asked to make him a sandwich. He wanted a granary bap with a fried egg, Gruyere, pesto and Marmite. Egg? Yes. Gruyere cheese? Lovely. Pesto? Tasty. Marmite? Love it. But all together? Oh dear, oh dear!

Horrific – but it couldn’t happen in Britain 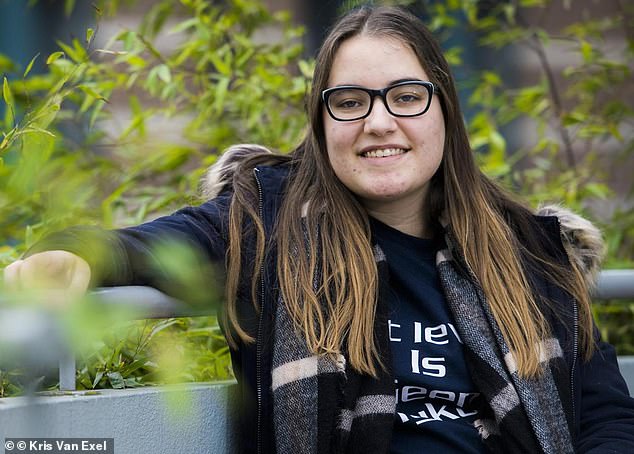 Shanti De Corte, a 23-year-old with depression but no other health problems ended her life with euthanasia in Belgium

It was distressing to read of the assisted death, in Belgium, of Shanti De Corte, a 23-year-old with depression but no other health problems. The death of someone so young who could have been helped psychologically was wrong, but as a supporter of a change in the law to allow dignity in dying in this country, I must point out the proposals in the UK would cover only the terminally ill, of sound mind, in terrible pain and expected to die within six months. Euthanasia — ending someone’s life at their request — is not proposed. Assisted suicide means the sufferer is provided with the necessary drugs, but must be capable of carrying out the act themselves. The choice is theirs alone.