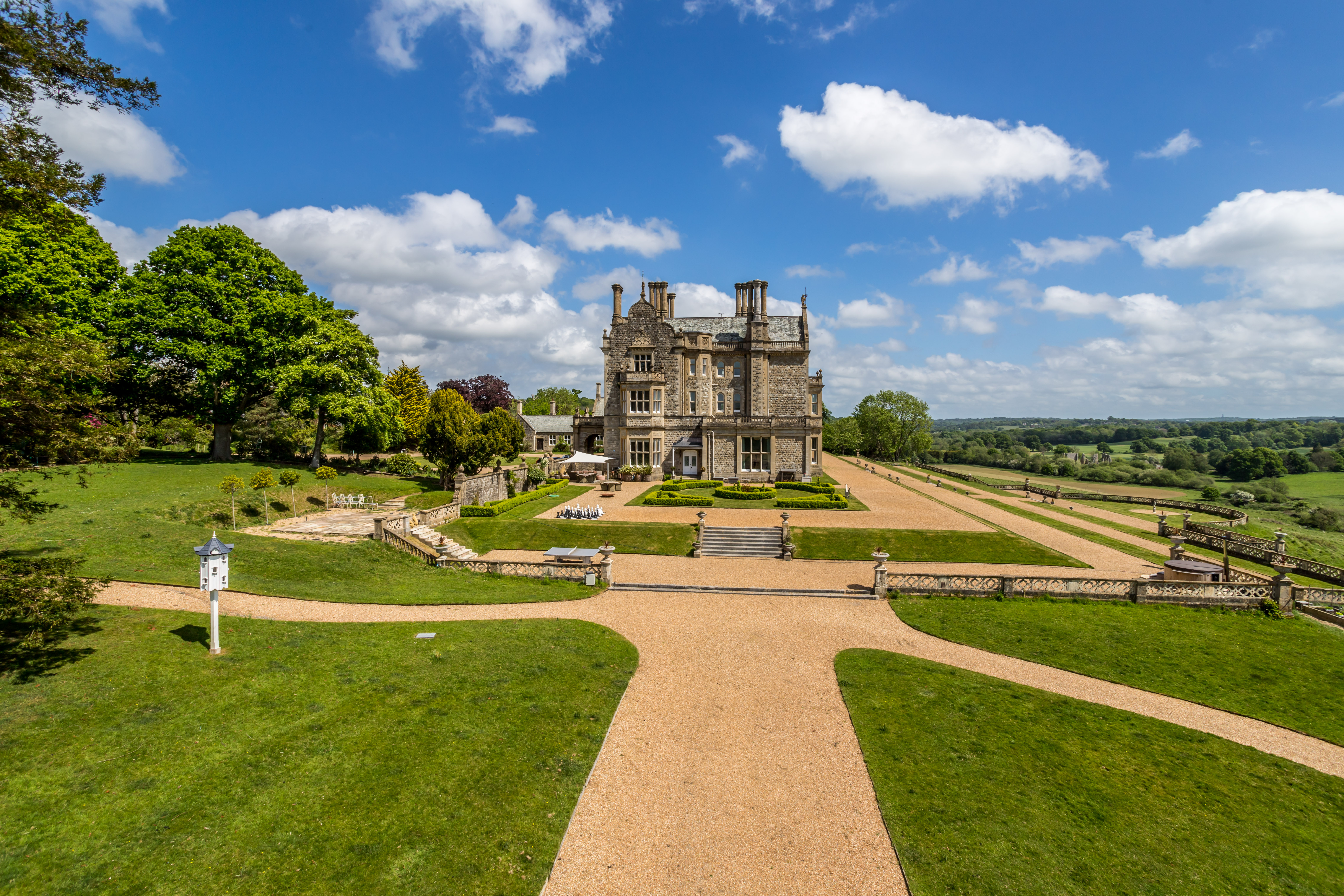 When Canadian-born wellbeing and fitness guru Jaime Cooke first viewed the huge country home her fiancé had just bought, British band The Darkness were rocking out on the terrace and a helicopter was hovering overhead.

‘The guys were air guitaring, filming the video for their single Growing On Me, and the ballroom was filled with their amps and kit,’ she says. ‘I had been in Canada, renewing my visa, and think I had seen a picture or two of the house, but that was my real introduction – it was a shocker.’

Her husband, tech investor Justin Cooke, 50 – who was friends with the band – admits that his purchase of the major portion of Grade II-listed Bayham Hall was something of a surprise to him, too.

Built in 1870 in grand Jacobean style as the rural seat of the 3rd Marquess Camden, it stands in Lamberhurst, Kent. In 2002, a family friend had invited Justin down from London to the village, in an Area of Outstanding Natural Beauty about eight miles from Tunbridge Wells.

‘After a couple of beers, he convinced me to go and look at this place for sale, overlooking the ruins of 800-year-old Bayham Abbey, and surrounded by the most staggeringly beautiful parkland designed by Humphry Repton,’ Justin says. As they swept up the mile-long drive and into the courtyard, where red-brick Bayham Hall sits behind a pillared gateway, his jaw hit the floor.

‘It was an incredible sight to behold,’ he says. ‘Let’s just say it was all a total whirlwind, and I hadn’t thought it all through logically, but within weeks I found myself moving from a rented flat in Spitalfields to an enormous country pile’.

Beyond the façade of the ornate balustraded and green slate-roofed house – divided up into several homes in the 1970s – Justin and Jaime were now the owners of the lion’s share of space, plus nearly five-and-a half-acres of private grounds. With 7,870sq ft and eight bedrooms over

One-off period detailing such as coloured marble fireplace surrounds, moulded ceilings, delicate cornicing and original shutters added to its singular beauty – but some huge challenges lay ahead for the Cookes.

‘Inside, it was rattly and draughty, and the electrics definitely weren’t safe,’ says Justin, the founder of digital agency Fortune Cookie, who has worked with The British Museum and Unicef. ‘The interiors were a bizarre melding of the best of the late 1800s and what stood for chic in the 1970s.

There was a Formica kitchen that was straight out of a BBC sitcom, exposed piping and an oil-fired heating system that cost a fortune to run. There was an awful lot of magnolia on the walls, and I am pretty sure there was at least one avocado bathroom suite.’

Jaime, who had set her heart on a buzzing London life, was similarly daunted. ‘I was only 27 when I arrived back in the UK and it was an awful lot of house to take on,’ she says. ‘Plus, I was busy setting up a business, which went completely crazy.’

Having carried out a cursory redecoration of Bayham Hall – repainting walls and installing modern bathrooms – the couple ended up decamping back to London for a few years, renting it out while they pursued their careers, but returning in 2012 when Jaime was pregnant with their third child.

This time, they were determined to transform Bayham from just an impressive historic house into a home fit for a 21st-century family, today made up of Bertie, now 13, Gibson, 12, Monty, nine, plus a brood of chickens, two Bengal cats and a leopard gecko.

Keen to make it as cosy and energy-efficient as possible, the couple spent hours researching eco-kit and insulation, which needed to be installed sensitively to respect the property’s heritage.

Ground-source heating, solar panels and secondary glazing were incorporated, with careful attention given to the giant stained-glass window through which heat was constantly escaping. ‘For the first time in its history, the house was actually warm,’ Justin says. ‘Plus, we achieved internet speed that you couldn’t get in W1.’

A new kitchen/diner was crafted within the former library, with grey granite work surfaces and a Mercury range cooker. Some of the original hand-carved leather wallpaper that had survived in this room was saved and is now displayed in the V&A. In fact, the ethos for the entire redesign was to renovate where possible rather than replace. Oak boards in the garden room and music room, for example, were reused, with foam spray beneath to retain heat.

The Farrow & Ball colour chart provided a scheme of neutrals, greys and pinks (including Skimming Stone, Mouse’s Back and Elephant’s Breath), offsetting a collection of artwork, furniture, objets d’arts and taxidermy built up by the couple through years of travelling and collecting.

‘I’ve found myself having to convince Justin of certain things,’ Jaime says, ‘such as the ginormous reindeer antler chandelier that hangs in the hall, which needed to be craned in, and a taxidermy moose head – a reminder of home. Our style is definitely eclectic, but as time goes on gets more grown-up and luxe.’

Big design statements throughout the home – including soft furnishings in bold prints from House of Hackney and a white glass Murano chandelier created by Venetian firm Sogni Di Cristallo – are counterpoised by simpler, more elegant pieces, such as sofas by libertylondon.com, decorative artwork bought at antiques markets in Paris and lighting by those purveyors of classic boutique hotel style, sohohome.com.

With the children now off to boarding school, and a longing for an overseas adventure, the Cookes have put their home on the market, for £3.25million. ‘We’re ready for something new, so are handing over the custodianship of the home, ideally to another family,’ Justin says.

‘They will get that elusive combination of rural seclusion with grounds full of wildlife, but also the benefits of being part of a community of people of all different ages.’

Jaime says the couple are open to negotiating on any furniture that the buyers might fall in love with, while Justin advises the eventual new owners to keep on pinching themselves.

‘After a while, you start to take the incredible spaces and features for granted. You need to keep on reminding yourself how unique it is.’

Bayham Hall is on the market at £3.25 million, via Hamptons