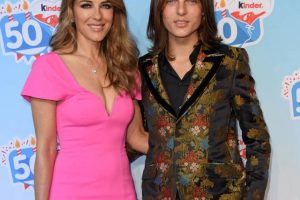 Elizabeth Hurley’s son has been cut from his father’s family trust.

Before Stephen Bing took his own life last year, he won a court battle overturning his father’s attempt to exclude his children, Damian Hurley, 19, and Kira Bonder, 23, from a family trust but that decision has now been overturned on appeal.

Damian’s mother Elizabeth Hurley told the Daily Mail newspaper: “When Stephen took his own life, he died thinking his children were going to be taken care of.

“What Stephen wanted has now been callously reversed. I know Stephen would have been devastated.”

Kira’s mother, Lisa Bonder, added: “As a mum, I wonder why on earth this had to happen. Why make two innocent kids into victims?”

Although Stephen initially had no relationship with Lisa or Damian, he had started to make amends before his death.

He reached out to Kira in 2015, with Lisa saying: “Kira was interested. I think she saw it as an opportunity to make amends, to heal the past and possibly get to know her grandparents and her cousins from Steve’s sister Mary.”

And Stephen also tried to develop a relationship with Damian, calling him for the first time on his 18th birthday last year.

He also supported Elizabeth and Lisa when Steve’s father, Dr Peter Bing, tried to cut Damian and Kira out of the ‘grandchildren trusts’ he had set up nearly 40 years earlier, on the basis they were both born out of wedlock.

Elizabeth said: “Damian’s grandfather, Peter Bing, had attempted to have Stephen’s children, including Damian, disregarded as his grandchildren in the irrevocable trust he had previously set up.

“Stephen fought very hard in his last year to have his children recognised and repeatedly told me how incredibly important this was to him.

“He was happy beyond belief that the trial verdict ruled that Damian was to be treated like his sister’s children as far as the trust was concerned.”

Lisa added: “It’s been horrible – forget about the actual legality of it all: this is their grandfather saying: “You don’t count, and I don’t want you to be a part of our lives because your mum was not married to my son.

“Damian and Kira have been disinherited from the Bing family trust. There’s no recourse, they can’t go back. They lost. It’s been very painful for them and left a family void for Damian and Kira to deal with.”