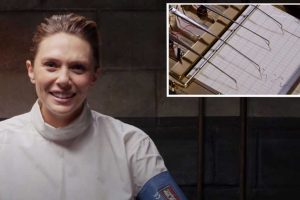 "F— man … It's so uncomfortable right now," she says — before revealing she's never met this MCU star and is an "aspiring stoner."

Elizabeth Olsen was put on the spot for Vanity Fair’s latest Lie Detector Test video — and boy did it deliver.

The moderator wasted no time putting the “Doctor Strange In the Multiverse of Madness” star in an awkward position by asking her about Danielle Haim, of the band HAIM. Olsen had previously said she knew the band growing up and was “intimidated” especially by Danielle, who she thought was the “coolest person in the world.”

So, one of the first questions for Olsen: “Danielle was recently in ‘Licorice Pizza,’ do you think you’re a better actor than her?” Without hesitating, Olsen broke into laughter and said “Yeah, sorry Danielle. I hope she’d agree!”

When asked if she saw “Licorice Pizza” and thought Danielle “wasn’t very good,” Olsen started cracking up again — before saying, “I loved the film and I thought she was great in it, but she didn’t have to do much.” At that point, she was called out for lying about something — either liking the film or about Danielle’s acting in it.

“Oh yeah, she was fine. F— man, sorry Danielle, you did great,” she said, defending herself. “I don’t know what’s happening. It’s so uncomfortable right now.”

As the test went on, Olsen revealed that, like her sisters on “Full House,” she does love to say, “You got it, dude!” in everyday conversation — but hasn’t said it to Mary-Kate or Ashley themselves. She also opened up about being a “wannabe” and “aspiring stoner,” after starting to use marijuana again “for the first time in like a decade.” Calling herself a “beginner,” she said it was something “that I’m not very good at,” before pointing out that it’s legal in California, where she lives. 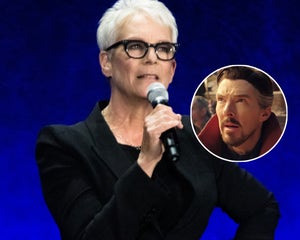 The questions then shifted to the MCU — and, you’ve been warned, this will include a “Doctor Strange” spoiler.

First, the “WandaVision” star confirmed that, yes, it was “Agatha All Along,” and claimed she was no longer part of any Avengers group text. She also agreed that Benedict Cumberbatch looked like an “excited otter” in one photo shown to her and said she has never met John Krasinski — who (SPOILER ALERT!!!!!!!!) appears as Mr. Fantastic in the most recent Doctor Strange film. “I’ve never met him. Never met him. I’ve never met that man. I’ve met his wife,” she said.

She was then asked about Chris Evans, saying that they used to be a lot tighter but they don’t live near each other anymore and, thus, don’t hang out as much. “He has a great laugh, so it makes you feel better about yourself when you tell a joke,” she said, “We were friends. We’re friends. I don’t know why I’m acting like he’s dead.”

Olsen would not commit to having a favorite Chris and when Chris Pratt was brought up she said he was “nice too.” She added, “They’ve all got different things to offer. They’re nice people to be around. None of them are divas and that’s how I feel about the Chrises. I think I like Chrises in general.”

The video ended with her showing off her “weird thumbs,” confirming she doesn’t have any secret social media accounts and exclaiming her love for Rosalia and “Saturday Night Live,” which she’d happily host someday.

As the clip came to its conclusion, she brought it back to the HAIM moment at the top — and added, “I feel like we were a bit harsh on the second lie.” 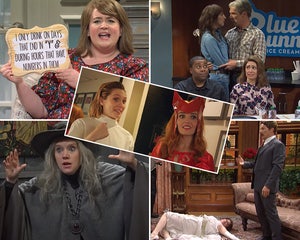