Ellen DeGeneres Switches Up Her Signature Hairstyle for Edgy New ‘Do 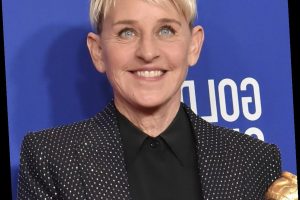 Ellen DeGeneres, is that you? In a new clip, the talk show host revealed she changed her hairstyle for the first time in years.

On Tuesday October 20, the TV host shared a clip from her talk show in which she's sporting a very different look. Instead of her typical short style with bangs in front, Ellen rocked slicked back hair that one commenter likened to her wife Portia de Rossi's signature 'do.

The clip in which Ellen showed off her new look included a joke about Cardi B's accidentally-released nude photos. Ellen joked that she, too, had nudes that were released. However, it looks like we'll have to tune in to The Ellen DeGeneres Show to see the photo Ellen was referring to, as the clip cut away just in time.

Ellen returned to the soundstage for season 18 after filming The Ellen DeGeneres Show at her and Portia's California home due to the coronavirus pandemic. The new season of the show, which premiered on Sept. 6, followed a summer of controversy that threatened Ellen's brand of generosity and kindness.

Among the controversies included allegations of a "toxic" workplace environment. In August, a spokesperson for Warner Bros. told E! News that executive producers Ed Glavin, Kevin Leman and co-executive producer Jonathan Norman "parted ways" with the syndicated talk show after an internal investigation was launched.

A number of celebrities, however, came forward to laud Ellen for her kindness over the years.

Nikki & Brie Bella Are Moving to a New City! All the Details

Emma Roberts Blocked Her Mom on Instagram After She Revealed Pregnancy

"On day one of our show, I told everyone in our first meeting that The Ellen DeGeneres Show would be a place of happiness—no one would ever raise their voice, and everyone would be treated with respect," the host wrote in a letter to employees in July. "Obviously, something changed, and I am disappointed to learn that this has not been the case."

Now, it seems Ellen is looking for a fresh start, and new hair may be part of that journey.

END_OF_DOCUMENT_TOKEN_TO_BE_REPLACED

END_OF_DOCUMENT_TOKEN_TO_BE_REPLACED
We and our partners use cookies on this site to improve our service, perform analytics, personalize advertising, measure advertising performance, and remember website preferences.Ok