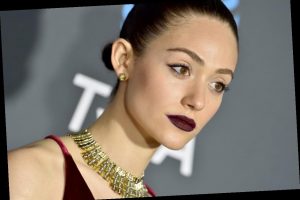 Emmy Rossum gave a bewitching performance in Joel Schumacher’s film version of The Phantom of The Opera (2004.) Yet despite receiving massive acclaim and recognition for the role, Rossum said she “never felt less sure” of herself “in every imaginable way.” Keep reading to find out more about the Shameless actor‘s journey into becoming more fearless and confident as a performer.

While it’s difficult to imagine the crass Fiona Gallagher singing opera, Rossum is nothing like Shameless‘s South Side character. She grew up performing at the New York’s Metropolitan Opera, according to Biography.com.

And fittingly enough, the multi-talented actor admits that she sings as often as possible.

“I do enjoy singing,” she told Interview Magazine. “I sing everywhere. I sing in the kitchen, I sing in the shower, I sing on the subway.”

According to Rossum, she used to sing as a child to get free food. (Specifically, she would sing to get free hot dogs.)

On Christmas Eve, Rossum answered a series of fan questions via her Instagram story. One fan asked for the actor to post about a time when she was at her “lowest, but no one had noticed.”

And in response to the fan request, Rossum posted a picture of herself as Christine in The Phantom of the Opera.

Rossum was only 16-years-old while filming the movie. And although the role would eventually cement her as the youngest Golden Globe nominee of all time, the brown-eyed beauty felt as though she had no right to be there.

She took to her Instagram story to write how she really felt.

“Honestly never felt less sure of myself in every imaginable way,” she confessed. “I questioned my ability, my appearance, my right to be there.”

Rossum has grown so much as an actor, tackling “dirty, gritty” roles, as she describes them in Interview Magazine. She says she likes playing these darker characters because they help her evolve as an actor.

And thankfully, she has come a long way since those insecure days while filming The Phantom of The Opera. While speaking to Interview Magazine, Rossum revealed how she managed to overcome her self-doubt. “Just remember how you felt when you were five, when you were fearless, and thought no one would judge you,” she said.

END_OF_DOCUMENT_TOKEN_TO_BE_REPLACED

END_OF_DOCUMENT_TOKEN_TO_BE_REPLACED
We and our partners use cookies on this site to improve our service, perform analytics, personalize advertising, measure advertising performance, and remember website preferences.Ok