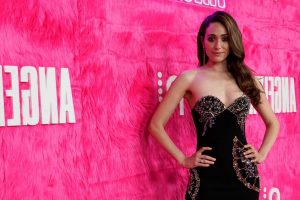 Most Angelenos know the Billboard Queen, Angelyne. The enigmatic human Barbie, self-described as a “Rorschach test in pink,” has been a mainstay of Los Angeles culture ever since billboards bearing her face and name began popping up throughout the city in 1984. She’s frequently spotted driving around L.A. in her signature pink Corvette, selling merchandise out of her trunk and charging $20 for a photograph.

Notoriously private about her true identity (although she has run for office more than once), she re-entered the spotlight in 2017, when a Hollywood Reporter exposé revealed her to be Renee Tami Goldberg, the daughter of two Holocaust survivors who created the fantastical identity of Angelyne through sheer willpower and a thirst for fame.

Now, that investigation has been adapted as a scripted series for Peacock, starring and executive produced by Emmy Rossum (“Shameless”). The real Angelyne was initially set to appear in the series, but decided to tap out for reasons that remain unclear. She has no formal credit on the show.

However, on the hot pink carpet at the show’s premiere — held at the Pacific Design Center in West Hollywood on Tuesday evening — Rossum told Variety that the real Angelyne, now 71, granted the series the rights to her life, trademarks, art and punk-pop music catalog, all of which are utilized on the show.

While “Angelyne” incorporates facts from the original investigation and the production team’s own research, the series purposefully toys with the nature of reality, creating alternate timelines and fantasy sequences that riff on Angelyne’s trailblazing philosophy of the self. Showrunner Allison Miller told Variety the show has “created a new person that Emmy embodied,” and comments on the impossible challenge of telling anyone’s “true” story.

“We don’t really think of it as a biopic,” Miller said. “We almost feel like it’s a show about the failure of biopics and how there’s no way we could get it right.”

Rossum underwent a mind-blowing transformation to take on the part, which sometimes took up to seven hours. Rossum wore facial prosthetics, contacts and a massive breastplate to embody her character over the course of decades. But the show’s cast members told Variety that they see the series tackling something larger than Angelyne’s penchant for vanity and glamour.

“I looked at her originally as someone who was just being famous for the sake of being famous,” said Charlie Rowe, who plays Freddy Messina, Angelyne’s billboard photographer. “But she wants to be famous because that’s how she perceives love.”

Rossum said she wanted the show to include tales inspired by Angelyne’s artwork of aliens and even Subreddit posts that show “the full picture of the myth that is Angelyne.”

The 2017 investigation reported that Angelyne is of Jewish descent, something she has never confirmed nor denied, although she has “found refuge,” as THR put it, in wearing “shiksa drag.” When asked about tackling questions of identity through the lens of her and Angelyne’s shared Jewish heritage, Rossum said she could “understand the dangers that come with owning that part of your identity,” although she didn’t “want to speak for her or the reasons behind why she created Angelyne.”

“She told me that I should tell the story that I wanted to tell — that she considers herself to be an icon and that she serves to speak to whatever the individual sees in her,” Rossum said. “She said she did what she felt she was inside and that’s how it came out, and we wanted to honor the legacy that she has in all of her pink glamour. I hope that the show is ultimately a love letter to that fun.”

All eight episodes of “Angelyne” premiere on Peacock on May 19.