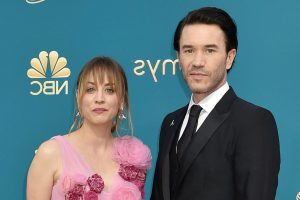 A perfect pair. Kaley Cuoco and boyfriend Tom Pelphrey made their red carpet debut as a couple at the 74th Primetime Emmy Awards.

The Flight Attendant star, 36, wore a custom a pink Dolce & Gabbana gown with 3-D floral embellishments and a high-low skirt as she posed arm-in-arm with the Ozark actor, 40, at the Microsoft Theater in Los Angeles on Monday, September 12.

In May, Cuoco revealed that she was dating Pelphrey less than one year after splitting from ex-husband Karl Cook. (Their divorce was finalized one month later.)

“Life lately,” she wrote via Instagram at the time alongside several photos with Pelphrey and their dogs on a mountain getaway. “The sun breaks through the clouds, rays of gold slipping into my eyes and heart, rays of yellow to break the grey.”

Two months later, the Big Bang Theory alum gushed about her new beau on Instagram while celebrating his milestone 40th birthday. “To the incredible man that saved me in all the ways … happy birthday, baby!” Cuoco wrote at the time. “To know you, is to truly adore you … the world lit up the day you were born ❣️ 🎂 I love you!! @tommypelphrey.”

The New Jersey native returned the favor that same month, when both he and Cuoco earned Emmy nominations for their work on Ozark and The Flight Attendant, respectively. “CONGRATULATIONS TO MY FAVORITE ACTRESS!!!” he wrote via Instagram before praising Cuoco for her “beautiful, brave work” on the HBO Max series. “[I’m] Beyond grateful to share this with you today… ♥️🙏♥️,” he added.

Prior to dating Pelphrey, Cuoco married tennis player Ryan Sweeting in December 2013 just two months after they got engaged. However, the pair called it quits in September 2015. She walked down the aisle a second time in September 2018 to marry equestrian Cook, 31, before they split in December 2021.

Despite her heartbreak, the Harley Quinn star has been open about her desire to find lasting love one day. “I believe in love because I’ve had incredible relationships. I know that they’re out there. I like being someone’s partner and having that companionship,” Cuoco told Glamour in April. “We’ve all been there where you think, ‘Oh my God, I’m never going to meet someone else.’ And you do. There are great people that come into your life and they leave your life. And there are reasons for all of it.”