Emotional reunion between father and son who had NEVER met

Father, 66, embraces the 28-year-old son he had NEVER met in an emotional moment that left This Morning viewers in tears – and is introduced to his 12-week-old granddaughter

A 66-year-old man came face-to-face with the son he had never met in an emotional moment broadcast live on This Morning today.

Ollie Aris, 28, was raised in the UK by his mother, a single parent, and knew little about his father Les Senzon, 66, a scriptwriter based in the US. 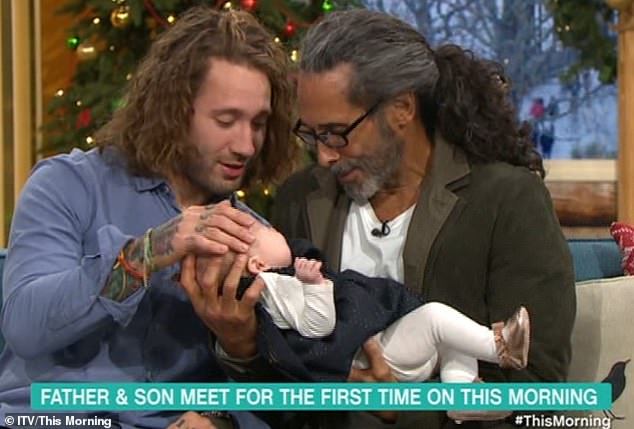 Ollie Aris, 28, was raised in the UK by his mother, a single parent, and knew little about his father Les Senzon, 66, a scriptwriter based in the US. The father and son came face-to-face for the first time on This Morning today, where Les also met granddaughter Blake, pictured 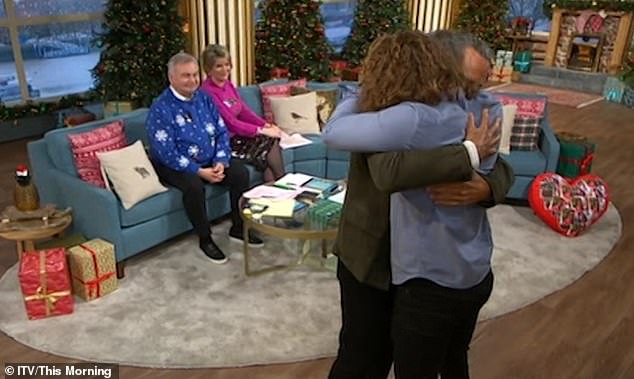 Ollie Aris, 28, reached out to his biological dad and the pair were reunited on an emotional This Morning episode today – and plan to spend Christmas together as a family 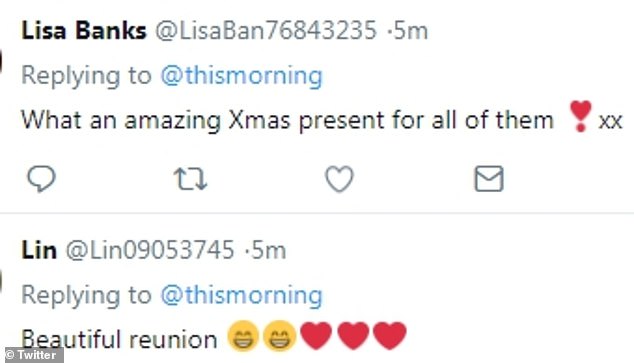 Ollie and dad Les weren’t the only emotional ones today. Viewers took to social media to express how touched they were by the live reunion

‘What a fantastic segment,’ said one touched viewer, while another labelled the reunion ‘amazing.’

Another penned: ‘This was the most amazing warming story and much needed among all the doom and gloom. I wish them much happiness now they have reunited again. What a gorgeous family.’

Others pointed out that the story is ‘what Christmas is all about’.

Talking to This Morning presenters Eamonn Holmes and Ruth Langsford about his childhood, Ollie said: ‘Growing up I knew very little. But I used to look at other families and think I really wanted that. It was hard.’ 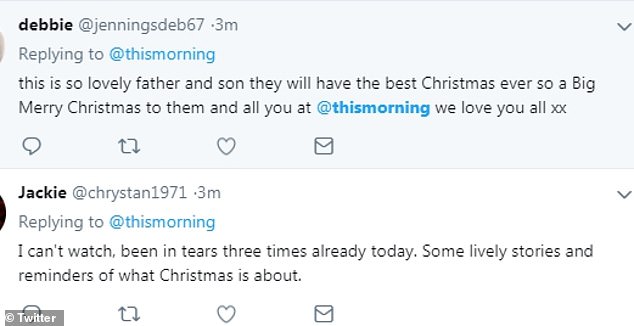 Ollie’s mother spent years trying to track Les down. Then, at the age of 21, Ollie finally found his father on Facebook. But their communication soon fizzled out.

Les explained a combination of family factors and a serious injury kept him from meeting his son.

‘At the time I was taking care of my mother who has dementia,’ he said.

‘I ended up having to put her in a home as my accident was so severe I ended up spiralling into a very severe depression. 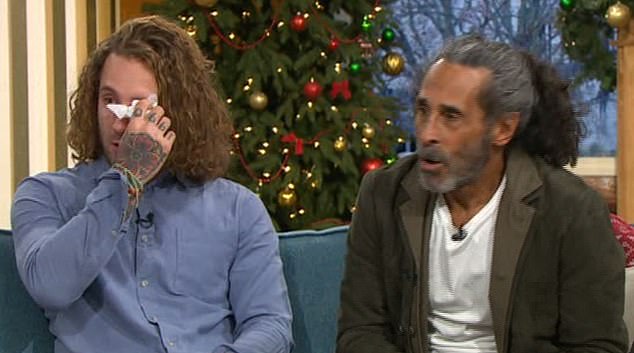 TV presenter Ruth Langsford handed the pair tissues to wipe away their tears, after they were reunited on the show in an emotional moment 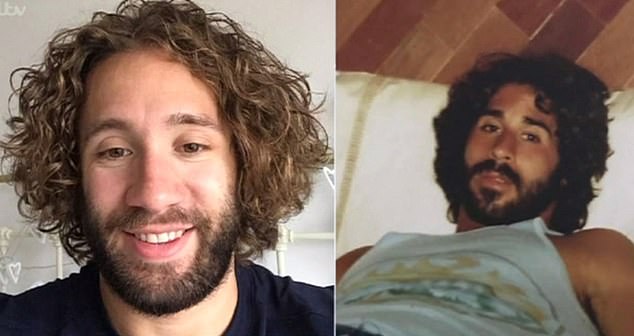 ‘It became very difficult, spiralling out of my near death and severe depression, as well as trying to deal with a son who lived so far away.’

He added: ‘It almost seemed like a blessing because he was so far away, but on the other hand it would’ve been so much easier if he was so closer.’

However the life-changing accident also put his life into perspective and encouraged him to contact his son. 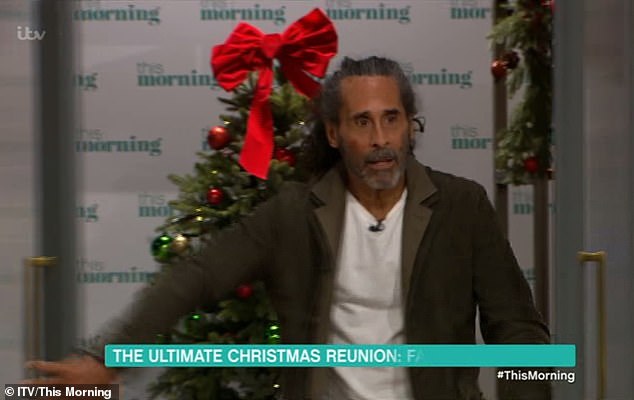 Les was waiting backstage before bursting through the doors, pictured, and pulling his son into a tight hug on the This Morning set 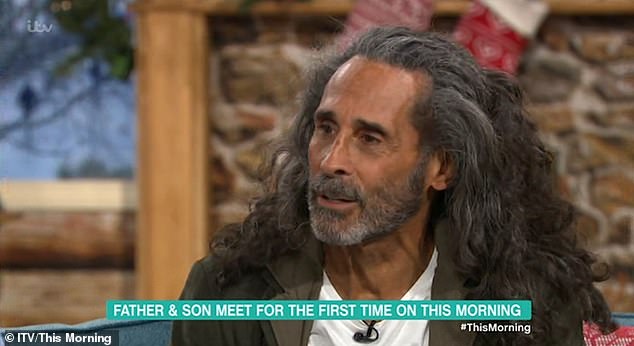 Taking his hair down to release the same flowing locks as his son, Les described the reunion as ‘overwhelming’

‘But as I started to come out of my depression it opened my eyes to the fact I needed to reach out to him,’ he continued.

The pair reconnected over Facebook and Ollie invited Les to come to the UK for Christmas.

Les was waiting backstage before bursting through the doors and pulling his son into a tight hug. 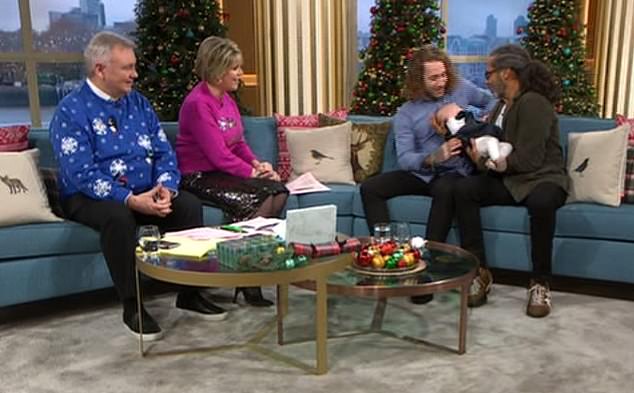 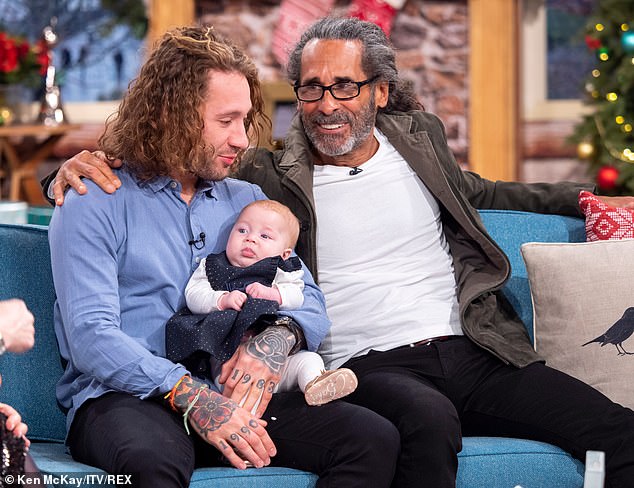 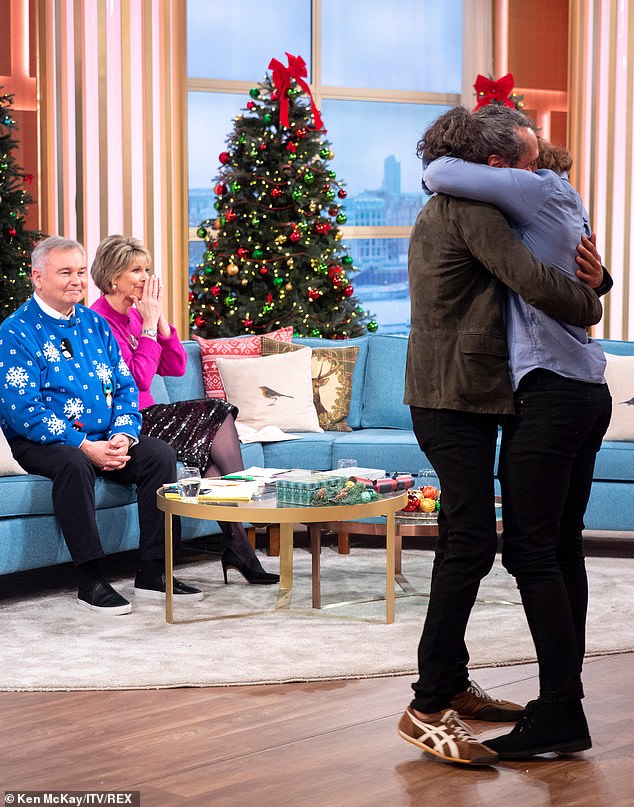 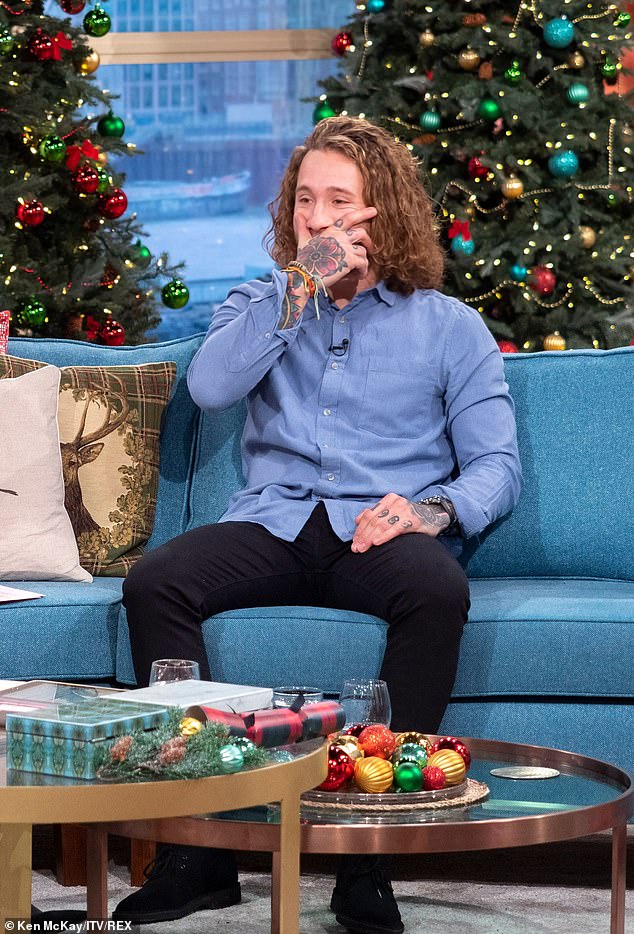 Flashing photo of Les as a younger man on screen, Eamonn commented on the striking similarities, with Ruth adding: ‘there’s no doubt that’s your son is it?’

‘I actually asked for a DNA sample,’ admitted Les. ‘But once I started speaking to him and looked at him I knew he was my son.’

Viewers were quick to agree. ‘Modelling contact on the way for the reunion father,’ said one. While another added, ‘loving their hair.’ 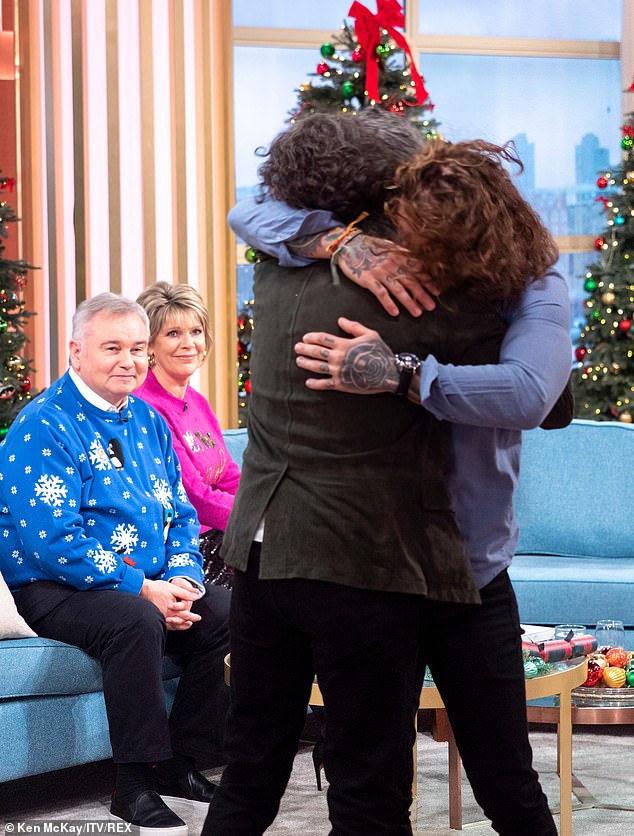 Les explained a combination of family factors and a serious injury kept him from meeting his son. Pictured: The two men hug while Ruth and Eamonn look on

Following their emotional reunion, Les was then introduced to his granddaughter Blake, 12 weeks old, for the very first time.

‘Hey sweetie,’ he smiled as he held her in his arms.

Father and son now plan to spend Christmas together.