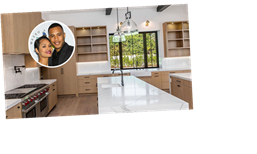 Married actors Trai and Grace Byers, best-known for their roles on “Empire” as Andre Lyon and Anika Calhoun, respectively, have traded the jam-packed hills of Hollywood for a roomy piece of suburban L.A. bliss. Records reveal the couple paid north of $4 million for their relaxed new digs, which were constructed on speculation by a prolific luxury homebuilder and sold before the charcoal-colored exterior paint was even dry.

Located in the San Fernando Valley neighborhood of Tarzana, the property sits privately on a quiet cul-de-sac, secured by gates and tall hedges. The large house itself is all one single level — somewhat unusual for L.A., where most new mansions span two or even three full floors of living space — and features an ever-trendy open floorplan with impeccable Feng shui.

Because it was never publicly listed, most of the home’s exact specifications remain vague, but the sprawling structure is known to pack in 6,500 square feet of living space with at least four bedrooms. Inside, creamy colors and large rooms lend the place an airy vibe, reinforced by vaulted ceilings and floor-to-ceiling windows. The kitchen offers a substantial island and top-of-the-line stainless appliances, while the master bathroom includes dual vanities and a freestanding soaking tub.

Other at-home amenities include a soundproof movie theater with captain’s chair seating for seven, a fireplace-equipped living room with built-in shelving, and massive banks of glass sliders that open to various parts of the yard. Out back, the spacious half-acre property includes a sports court and swimming pool; out front, there’s a three-car attached garage with trendy smoked glass doors, plus a grassy lawn.

With “Empire” having wrapped earlier this year, Trai Byers is looking ahead to his starring role in the upcoming “The 24th,” a historical drama film he also co-wrote and co-produced. Grace Byers, for her part, is set to star in the as-yet-untitled Tracy Oliver comedy series for Amazon.

The Byers family’s new Tarzana digs provide a striking contrast to their Hollywood starter home, a far more vertical residence that was sold last November for about $2.1 million.