Home » Lifestyle » Escher X nendo: A labyrinth of surprises at the NGV

Escher X nendo: A labyrinth of surprises at the NGV

M.C. Escher is one of those artists that exerts an irresistible fascination on young minds. I remember being entranced by the Dutchman's drawings while still at school after an art teacher suggested I look at his work. Even if the name is unfamiliar, at some stage you will have probably seen one of Escher's signature images such as the Drawing Hands (1948) in which two realistic-looking hands are shown emerging from a flat sheet of paper. The left hand draws the right, and vice-versa.

Alternatively you may have seen the Hand with Reflecting Sphere (1935), showing a meticulous but distorted image of the artist and his studio; or Convex and Concave (1955) – a paradoxical image of buildings and stairs in which it's impossible to distinguish inside from outside. Such pictures have transcended the realm of art and become part of a broader cultural heritage. 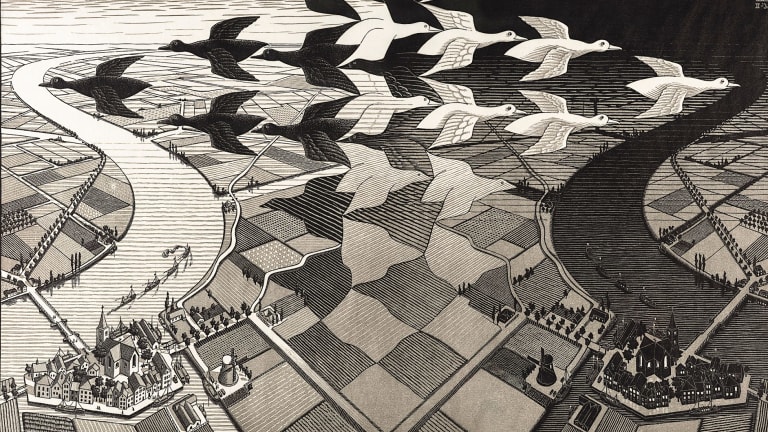 Escher's celebrity has been a mixed blessing as he has often seemed too much a part of popular culture to be viewed as a significant talent. He always referred to himself as a "graphic artist" but curators would use that term with derision. When his mind-bending images were discovered by the counterculture of the 1960s and reproduced on the covers of rock albums, he drifted even further from institutional recognition.

It's surprising to learn that Escher never made a living from his work until he was well into his 50s, and had to wait until the age of 70 to be given his first museum retrospective. That took place at the Gemeentemuseum in The Hague, the same museum that has contributed 160 prints and drawings to the National Gallery of Victoria's summer blockbuster, Escher X nendo: Between Two Worlds. 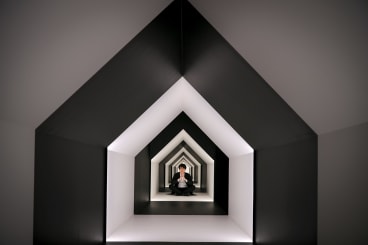 If this sounds like a conspicuously arty title for a show intended to reach the widest possible audience, it's also a testimony to the NGV's booming self-confidence and sense of adventure. Confronted with the problem of how to display a large collection of prints and drawings in a manner that didn't appear repetitious, the gallery came up with a radical plan: they asked the Japanese design firm, nendo, to "collaborate" with Escher (1898-1972), creating a frame for the work that served as a kind of double exhibition. They've also published another magnificent brick of a catalogue.

In the inaugural NGV Triennial, held over the summer months last year, nendo (the name means "clay") contributed an installation called 50 Manga Chairs (2016), that proved to be one of the highlights. It was an inspired idea to ask the firm to work with the Escher images, but the gallery was already familiar with the thinking processes at nendo – or at least with those of its chief designer, Oki Sato.

The title, Escher X nendo may recall Japanese kaiju movies such as Godzilla vs. Mothra, but I've never seen anything quite like it. In planning this installation Sato noticed there is often a "hero" – a repeated motif – in Escher's pictures that acts as a vehicle for a design concept. Accordingly, he chose a simple house as a form that could be repeated throughout the exhibition in many different configurations.

Despite the sophistication of the design it's not a seamless process. Many of Sato's concepts seem only tangentially related to Escher's work, but the overall effect is amazing. It's like wandering in a labyrinth in which each new room provides a fresh surprise. When we've registered our surroundings, we get down to the serious study of Escher's pictures that are embedded within each installation. 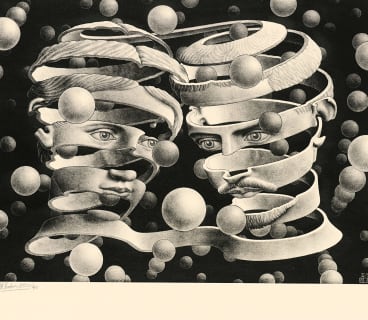 M.C. Escher’s Bond of Union, detail, (1972). His pictures have transcended the realm of art and become part of a broader cultural heritage.Credit:NGV

The most striking room is probably the large central gallery in which we find rows of small black houses transforming into rows of white houses. We view the entire ensemble from a raised platform, then walk between the houses, pausing to scrutinise the pictures displayed in glass-topped boxes. The idea is for us to feel we are stepping into one of Escher's pictures, poised somewhere between two and three dimensions. 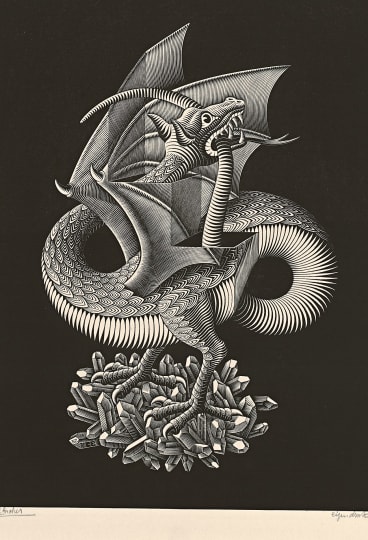 M.C. Escher’s Dragon March, detail (1952). Surprisingly, the artist never made a living from his work until he was well into his 50s.Credit:Alice de Groot

I don't want to dwell for too long on nendo because it is Escher's work that lies at the heart of this show, yet one has to acknowledge the symmetry involved in getting an Asian designer to work with a famous Western artist. Escher himself was strongly influenced by Japanese prints and Islamic geometrical motifs. The ukiyo-e printmakers, in their turn, had been influenced by their glimpses of Western art, so the trail of inspiration slides from east to west and back again, like one of Escher's moebius strips.

Escher was preoccupied for decades with works that demonstrated "the regular division of the plane". In its simplest form this refers to those images that feature an identical motif in two different colours – a bird, a lizard, a flying fish – repeated in an even pattern across a sheet of paper. When we focus on the black images we read the white ones as background, focus on the whites and the black ones recede. It's an unshakeable perceptual habit, and Escher was driven to explore its implications.

Although he consciously avoided symbolism, Escher staged many suggestive transformations. In Reptiles (1943) lizards morph from two to three dimensions as they crawl in and out of a drawing. Birds are transformed by stages into fish; a black figure (the pessimist) encounters a complementary white figure (the optimist). In the elaborate woodblock print, Day and Night (1938), a flock of black and white birds devolves into a landscape divided into mirrored halves, one in darkness, the other in daylight.

These works are justly famous but for many viewers the real delight of this show will be Escher's early prints, made during the years he spent in Italy, from 1922-37. The skill and patience it took to make a woodblock image such as Pineta da Calvi, Corsica (1933), is staggering. Escher referred disparagingly to the Italian years as his "technique"period, but nowadays there are few artists anywhere that have such resources.

We tend to think of Escher as a cerebral artist but in the works he made before returning to the Netherlands we see the romantic side of his personality. It was his peculiar distinction that he could feel the same passion for mathematics that he previously felt for the Mediterranean landscape.

Escher X nendo: Between Two Worlds is at the National Gallery of Victoria, Melbourne, until April 7.