Home » Lifestyle » Everything Famous ’Beverly Hills, 90210' Guest Stars Have Said Over the Years

Everything Famous ’Beverly Hills, 90210' Guest Stars Have Said Over the Years 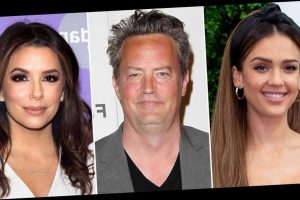 Every Beverly Hills, 90210 guest star has a story — and they didn’t all split a piece of pie with the cast at the Peach Pit.

Doherty and Garth, for example, have been open about their rocky relationship during the first four seasons of the series.

“We were locked in this sound stage for 14-16 hours every day,” the What I Like About You star wrote in her 2014 Book, Deep Thoughts From a Hollywood Blonde. “There were times when we loved each other and there were times when we wanted to claw each other’s eyes out … It was more of just young girls finding their way and finding their individual voices. … Poor Tori, the youngest of the three of us was, inevitably, often caught in the middle and she was always trying to smooth things over.”

Garth later recalled a physical fight with Doherty during an appearance on Watch What Happens Live With Andy Cohen in August 2019.

“I can only remember one incident and that was when, yeah, we took it outside,” she said. “I’m a midwestern girl. I spent some time in Glendale, Arizona, and that makes you tough.”

Spelling provided more context of the altercation. “You guys were teasing each other and she, like, pulled your skirt up,” she told Andy Cohen. “I stayed in my dressing room when it was happening, shaking.”

During an interview with Us Weekly, however, the True Tori alum noted that Doherty “had an unfair rap” all these years.

“She took it and took it like a champ. Once they gave her that label, it lived with her, her whole career, and that’s unfortunate,” Spelling said while promoting the show’s short-lived quasi-revival, BH90210, which aired in 2019. “I know what it’s like to get a label of something and that’s the one story that stays with you forever, and it just wasn’t true.”

While Spelling, Garth, Green and Ziering were the only original cast members to stay on for the show’s entire 10-season run, several famous faces were featured on the series over the years — and they’ve also been candid about their experience.

Scroll through to read Jessica Alba, Hilary Swank, David Arquette and more had to say about their time in the iconic zip code:

END_OF_DOCUMENT_TOKEN_TO_BE_REPLACED

END_OF_DOCUMENT_TOKEN_TO_BE_REPLACED
We and our partners use cookies on this site to improve our service, perform analytics, personalize advertising, measure advertising performance, and remember website preferences.Ok