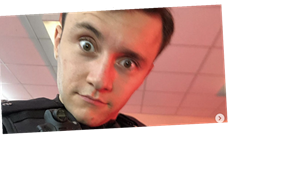 Want the most up-to-date celebrity exclusives sent straight to your inbox every day? Sign up now and join the club!

Line of Duty has made its much-anticipated comeback with series six.

And eagle-eyed viewers will have spotted a familiar face in Ryan Pilkington, played by Gregory Piper.

A young Ryan first crossed paths with AC-12 in series one while running burner phones between the OCG (organised crime group) on his bike.

But now he is back as a police officer on the murder case into journalist Gail Vella.

So what do we know about the actor? Let’s take a look…

How old is he?

Where is he from?

The actor achieved his Higher National Diploma at Dudley College.

Is he dating anyone?

Gregory has been in a relationship with actress Rebecca Fuller for five years.

The pair recently celebrated their anniversary and Gregory posted a sweet Instagram, captioned: “Happy anniversary baby!!! 5 whole years! Mad to think how quickly it’s gone! Time flies when you’re in love. You’re my rock to the moon and back girly.”

In June 2020 the couple announced they were owners of Midlands-based Drama Workshop which aims to help young children aged seven and over take their first step into acting.

When did he make his Line of Duty debut?

A 13-year-old Gregory made his BBC debut in 2011 for series one of Line of Duty.

He was recruited into the OCG and was tasked with couriering untraceable burner phones.

Meanwhile a 21-year-old Gregory returned to the hit police show for series five in 2019 where Ryan was part of the Organised Crime Syndicate.

Later in the series, the character slits the throat of John Corbett, played by Stephen Graham, who was exposed as a traitor to the OCG.

In the series five finale we see Ryan accepted as a trainee police officer and he is now working alongside DI Kate Fleming, Vicky McClure, and DCI Joanne Davison, Kelly Macdonald.

Gregory shared snaps from the series in his police uniform to his Instagram, captioned: “Completely overwhelmed by the response to last night’s episode.

“Thanks for the lovely comments, I feel very lucky to be a part of all the madness! Roll on the rest of the series.”