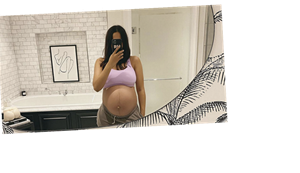 Rochelle Humes is expecting her baby boy in the coming weeks, with husband Marvin Humes, and in preparation for the big day the star has decided to isolate.

The 31 year old, who recently shared her baby haul with another crib and car seats, took to her Instagram feed to share a gorgeous photo of herself before explaining she's going to be home until the birth.

The snap sees the star posing in front of a mirror, wearing nothing but a purple sports bra and a pair of khaki-coloured jogging bottoms.

She then spoke about a dark line running down her tummy, saying: “Side note, I get this dark line down my tummy every pregnancy…anyone know what it is?" she added followed by a pregnant woman emoji and the hashtag #38weekspregnant.”

Rochelle, who is mum to adorable daughters Alaia-Mai, seven, and three year old Valentina, was met with a large response from fans weighing in on what the dark line is.

And the general consensus was that it’s something named Linea Nigra, which celebrity Dr. Ranj Singh appeared to confirm.

Replying to Rochelle, Dr. Ranj penned: “The line is called a linea nigra – it happens because of pregnancy hormones. And it’s absolutely normal to feel a little freaked out right now – your body is going into full-blown mum mode and you want to protect yourself and the little one as much as possible. Am here for you anytime if you need babes!" [sic] followed by a red heart emoji.

So, off the back off Dr. Ranj’s explanation, here’s a closer look at what Linea Nigra is…

What is Linea Nigra?

Healthline writes that Linea Nigra is “no cause for alarm” and that it usually occurs around the middle of pregnancy.

The health site continues: “At some point during your second trimester, you may notice a dark brown line running down the middle of your abdomen, between your belly button and pubic area. This line is called the linea alba. You’ve always had it, but before your pregnancy it was too light to see.

“When melanin production increases during pregnancy, the line gets darker and more obvious. Then it’s called the linea nigra.”

What should you do about Linea Nigra?

According to Heathline, as the line isn’t harmful to the baby, you won’t need medical treatment.

The site continues: “Some people believe that the linea nigra could send a signal about your baby’s gender. They say that if it runs to your belly button, you’re having a girl, and if it keeps going all the way to your ribs you’re due for a boy. But there isn’t any science behind the theory.”

After pregnancy the line should begin to fade however Heathline adds that: “In some women it may never completely disappear. “If the line doesn’t go away after pregnancy and its appearance bothers you, ask your dermatologist about using a skin bleaching cream. That may help the line fade more quickly.

“Don’t use a bleaching cream during your pregnancy or while you’re breastfeeding, because it can be harmful to your baby.

“If the line really bothers you during pregnancy, try concealing the line with makeup until it fades.

“Be sure to wear sunscreen whenever you expose your belly and other areas of your skin to the sun. Sun exposure can make the line even darker.”

END_OF_DOCUMENT_TOKEN_TO_BE_REPLACED

END_OF_DOCUMENT_TOKEN_TO_BE_REPLACED
We and our partners use cookies on this site to improve our service, perform analytics, personalize advertising, measure advertising performance, and remember website preferences.Ok