Home » Lifestyle » Evonne Goolagong: ‘I want others to learn from my experiences, good or bad’

Evonne Goolagong: ‘I want others to learn from my experiences, good or bad’

When tennis great and Wiradjuri woman Evonne Goolagong met the young Indigenous actor who portrays her on stage, she complimented her “good follow through” with a racquet on the makeshift orange clay tennis court, “particularly on my favourite backhand stroke”. 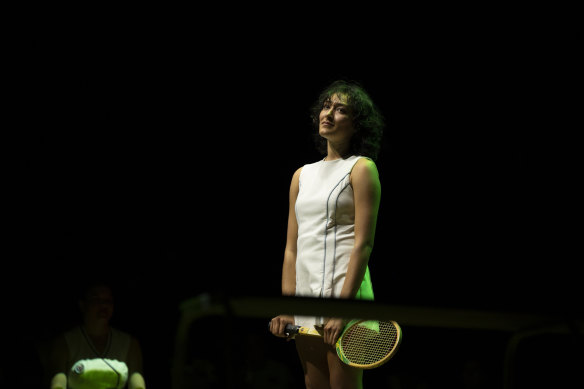 Yet Ella Ferris, a Taribelang woman who grew up in Cairns, admits she didn’t know what a serve looked like when she was cast as Goolagong in Sunshine Super Girl, and knew next to nothing about tennis.

Instead, dance helped her get match fit for the play, which is finally set to come to Melbourne after a long postponement due to COVID lockdowns, having already toured several other cities and regional towns, with the Sumner Theatre stage to be reconfigured and thrust into the auditorium like a sports arena.

Sunshine Super Girl tells the Goolagong story, from her fringe camp beginnings on her Country in the NSW Riverina and her family’s move to their own home in a shopfront in the wheat-belt town of Barellan, to her first grand slam title in Paris at 19 and a career ultimately encompassing 84 singles, 53 doubles and six mixed-doubles titles.

Goolagong, now 71, and her husband Roger Cawley finally saw the play for the first time in August at the Darwin Entertainment Centre, in an audience of 230 Aboriginal children from all around Australia who were attending the nearby National Indigenous Tennis Carnival. 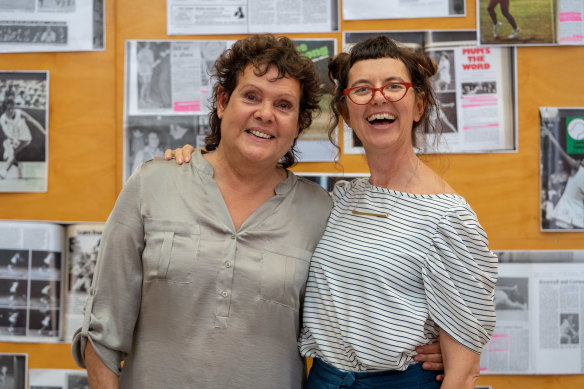 “She was divine,” Ferris recalls. “She was giggling at parts I thought were sad. It helped me understand the play in different ways.”

Ellis, the third actor to take on the role of Goolagong in the play, trained at the Australian Ballet School in Melbourne prior to studying acting at the Victorian College of the Arts, and relied on the language of ballet to capture Goolagong’s signature grace, noting in her research that Goolagong “danced”, “waltzed” and even “sauntered” on court.

In rehearsals, movement director Katina Olsen instructed Ferris with classical ballet terms such as “port de bras”, or carriage of the arms, which meant more to the actor than “serve”, prompting Ferris’ muscle and kinaesthetic awareness to make the necessary tennis-playing shapes.

Goolagong tells The Age the dance element attracted her to the play, written by Yorta Yorta/Gunaikurnai playwright and director Andrea James.

“I loved to dance,” Goolagong recalls. “People have always told me I moved and played gracefully.” 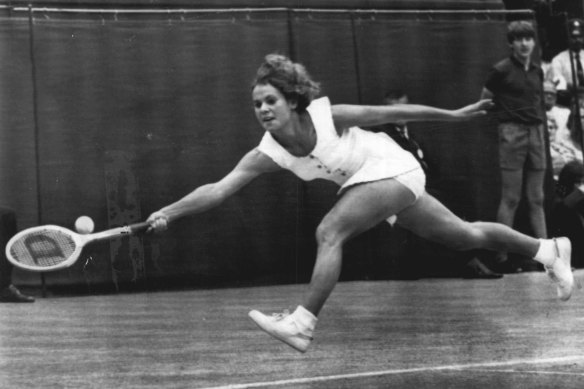 Evonne Goolagong at Wimbledon in 1971.Credit:AP

Goolagong and Cawley gave James critical feedback when the play was being drafted, a process James recalls as “nerve-racking” given the high regard in which she held Goolagong but also needing to explain why statistical minutiae the couple raised would not work dramatically.

“They weren’t backward in coming forward [with criticism], but also their expertise is sport and mine is theatre,” James says, “so it took a while to understand each other’s languages.”

Goolagong concurs: “Yes, we had our moments with Andrea making sure that accuracy was portrayed alongside artistic impression.”

The Goolagong speaking in the play recalls happy times in the family’s first home in Tharbogan, “our little shack with the tin walls and dirt floor”, crediting her father Kenny’s Riverina sheep-shearing record for her competitive streak, but alludes to the danger of being removed from her family: “All us kids knew to look out for the black car. We had it drummed into us.” 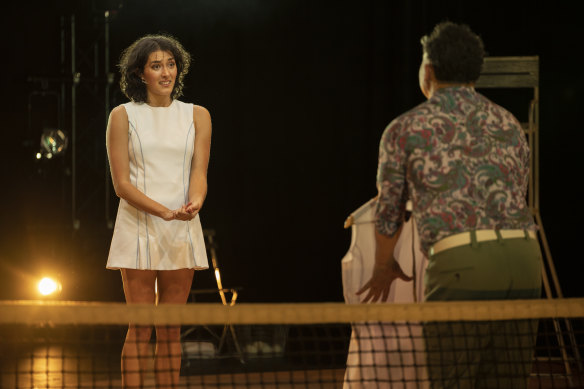 The play does not shy away from the racism Goolagong faced in Australia, including media coverage that called her “dusky” and her skin “biscuit-coloured”, in an era when Indigenous people were only granted inclusion in the population census for the first time after the successful 1967 referendum.

One character, a white-skinned female tennis opponent with a “limp, damp, cold handshake”, tells Goolagong in the second act: “Well, that’s the first time I’ve ever had the pleasure of playing a n—–’,” with the “n” word reverberating around the court.

The play also portrays Goolagong’s tennis coach, Vic Edwards, “lurching” towards Goolagong, then aged 18, and calling her “ungrateful” after she pushes him away. Edwards died in 1984.

For some 30 years now, Goolagong has worked with Cawley to share her life stories and advise Indigenous children at camps run by their Evonne Goolagong Foundation, bringing in experts to discuss such subjects; its motto is “dream, believe, learn, achieve”.

I ask Goolagong if it was important to her that Sunshine Super Girl portray the racism and inappropriate behaviour she encountered.

“Absolutely, yes,” she says “I was lucky to be found in the first place and lucky not to be taken away during the Stolen Generation[s]. I want others to learn from my experiences, good or bad.”

In the play, the teenage Goolagong is told: “You’re a blackfella living in Australia. That’s political.”

But Goolagong today says she felt “no weight at all” in being one of the few sporting role models representing Indigenous Australia.

“I had fun out there in my own little world. I found playing joyful.”

Sunshine Super Girl previews at Melbourne Theatre Company’s The Sumner from November 9, and the season runs to December 14.