FORT LAUDERDALE, Fla. — The then-sheriff’s deputy who was on campus during the Parkland, Florida high school massacre but failed to confront the shooter didn’t show up to answer an investigative panel’s questions Thursday.

DiRuzzo then left. One victim’s father said to DiRuzzo, “He didn’t do his job. My daughter should be alive.” 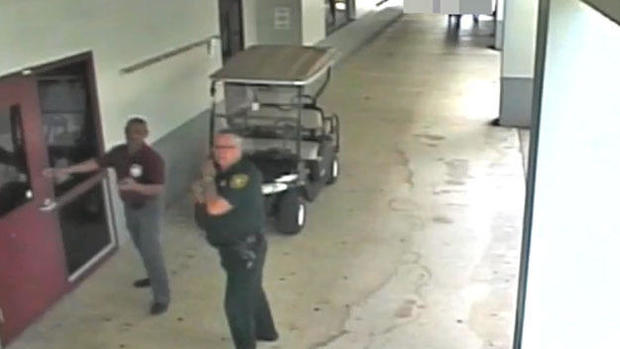 Peterson was assigned to the school and arrived outside the building where 17 died on Feb. 14. He drew his handgun, but never went inside to confront the shooter even after other deputies and police officers did.

The Marjory Stoneman Douglas High School Public Safety Commission, run through the Florida Department of Law Enforcement, was established to identify and address issues that arose during the mass shooting and propose recommendations and safety improvements. The panel includes law enforcement officials, educators, mental health professionals, a legislator and the fathers of two slain students.

The committee chair, Pinellas County Sheriff Bob Gualtieri, said Peterson was served with a subpoena ordering him to testify at Thursday’s hearing, and that DiRuzzo accepted it on his behalf and said Peterson would appear.

“He said he was going to come and he didn’t come,” Gualtieri said.

Gualtieri said the panel would weigh whether to ask a judge to compel Peterson to show why he shouldn’t be held in contempt.

Peterson drew heavy criticism Wednesday as commissioners watched a presentation on his actions. The commission believes Peterson could have prevented at least six deaths if he entered the building immediately.

“He was a cop in name only,” Polk County Sheriff Grady Judd said. “If he had been a real cop, he would have run in there with that gun.”

Peterson told investigators he heard only two or three shots, and didn’t know whether they were coming from inside or outside the three-story freshman building. That is contradicted by radio calls in which he correctly identifies the building as the shooter’s location. Bullets also came out a window almost directly above where he took cover. About 150 shots were fired.

Peterson, 55, retired shortly after the shooting rather than accept a suspension while an internal investigation was conducted.