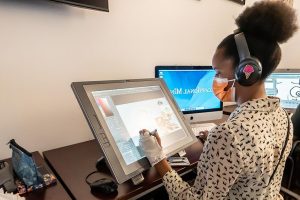 Nearly 10 years ago, the nonprofit academy Exceptional Minds was founded with the mission of creating a pathway for young adults on the autism spectrum to explore the creative arts. Since, the organization has gone above and beyond, with many former alumni going on to secure competitive jobs in their field of interest post-graduation.

“We’re looking forward to really building a pipeline of work-ready talent that is going to provide Disney access to a broader pool of talent and help them diversify their inclusive hiring practices,” David Siegel, executive director and CEO of the program, told Variety. “Not just because it’s the right thing to do — because it absolutely is — but because these artists are awesome and they are delivering.”

In recognition of students, teachers and partners who have been influential to the program, Exceptional Minds will host an anniversary celebration Oct. 22 in the Legends Plaza of the Walt Disney Studios lot. The event, which is being dubbed “Decade of Impact,” will showcase the work of current students and graduates from animated portfolios to LED wall projections.

Some original artwork will also be available for auction, the proceeds of which will be divided between the artist and the Exceptional Minds tuition assistance fund.

But instead of the night being structured as a traditional gala, Siegel told Variety the celebration was organized with accessibility and comfort at the forefront.

Long drink lines will be eliminated by having a four-sided bar, and lo-fi music will play on the speakers rather than an adrenaline-pumping DJ set, Siegel explained. Food trucks and hors d’oeuvres will be available throughout the evening, so attendees can graze as they see fit. And most significantly, two quiet, indoor spaces will be accessible for attendees to take a breather from socializing at the outdoor event.

“We always want to factor in the accessibility of every kind of event,” Siegel said. “While this is going to be an event with lots of people, we have to also consider our audience and be sure that we’re really providing them with loads of comfort.”

Disney is the official host sponsor of the evening, hence the event’s location. The company’s partnership with Exceptional Minds dates back as early as 2014, when the program launched their own visual effects studio. By virtue, the program also developed close relations with Marvel Studios, which was acquired by Disney about five years prior.

With the help of Victoria Alonso, Marvel Studios’ president of physical, post-production, VFX and animation, the program was soon inundated with opportunities for students to score credits on surefire box-office hits like “Avengers: Age of Ultron” and “WandaVision.” In the last seven years alone, Exceptional Minds graduates have worked on almost 30 different Marvel titles in film and television.

The Exceptional Minds website provides the harrowing statistic that 85% of people with autism are unemployed. But with graduates from the program going on to work full-time jobs in post-production for renowned studios like Nickelodeon, Sony, Warner Bros., HBO, Netflix and Amazon Studios, Exceptional Minds continues to prove that these young creators are an invaluable asset to Hollywood.