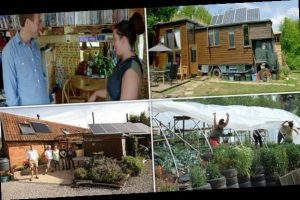 The not so Good Life! Couple who quit their council estate and spent years fighting to build a country eco-home say their new life has been ‘hard and monotonous’ – and now an industrial estate is being built on their doorstep

A family who fought to build a house on a piece of land they bought in 2009 finally got to have their dream home – but the council is now building an estate nearby.

The couple hoped to build a barn-style home and in the meantime, they lived in a converted horse box with their two children. However, they fought an uphill battle with the Willand council, who refused to approve their building application year after year.

TV presenter Ben Fogle first visited the Masons in 2015 for New Lives in the Wild, and revisits the family five years on for the tonight’s epsiode of the show on Channel 5.

While the family has finally built their three bedroom house and have running hot water, their tourbles are not at an end.

With brutal honesty, Dinah admits the dream she’s chased for so long has left her exhausted and isn’t everything she thought it would be, while an industrial estate being built nearby threatens their peace and tranquility. 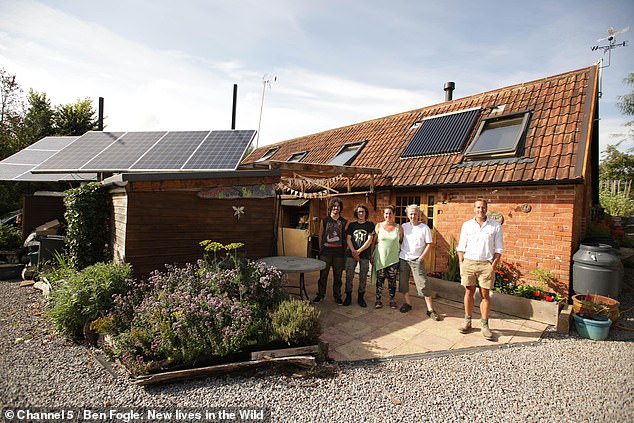 Ben Fogle travelled to Devon to visit the Mason – a family of four he first met in 2015. Parents Dinah, 44 and Stig, 43, moved from Bladlock, Hertfordshire to Devon in 2009, but struggled with an unfriendly welcome from the neighbours and council (pictured now with their two sons Dali, 18 and Yosse, 17) 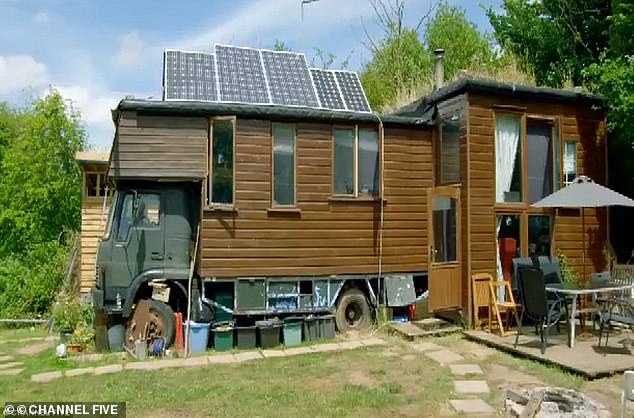 At the time of Ben’s 2015 visit, the Masons ,lived in a converted horsebox which contained a small shower and very little space for beds and cooking (pictured)

Upon arriving on their newly-bought piece of land, the Masons stayed in their converted horse box, looking forward to build an energy-efficient barn.

When Ben visits five years on, they’ve finally managd to get permission and built their dream barn home with three bedrooms and running water.

The family agree that having separate rooms and hot water has made a world of difference for them, especially now that Dali is 18 and Yosse is 17.

But mother-of-two Dinah candidly tells Ben she feels like the reality of the dream was ‘b***** hard work’ to maintain, and ‘monotonous.’ 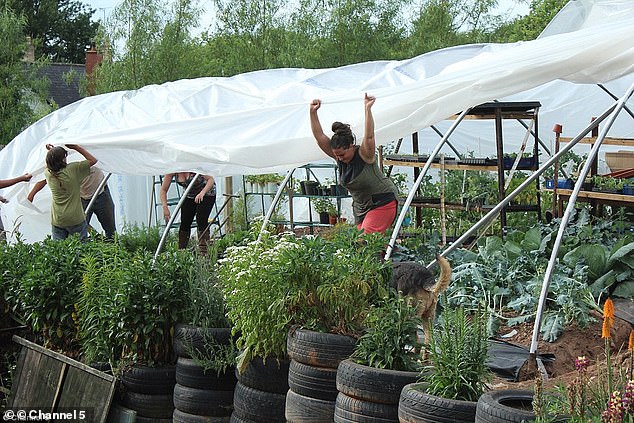 In 2015, Dinah and Stig were laying the foundation for their future eco-friendly home and hoped to be completely self-sufficient 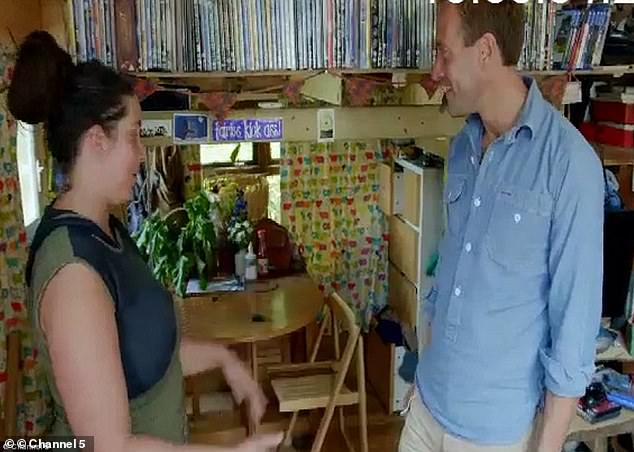 The  mother-of-two had walked Bent through the converted horse box, with the host impressed with how condensed the space was

‘I look back on that and wonder how I was so bloody positive. We really earned what we’d done and I’m really proud of it,’ she says.

Reflecting on the fight she and Stig had on their hands in order to build their home, she says: ‘Once we moved into the barn, I was actually really poorly. Cos you just like hold a space for years, trying to live your dream, to fight for your dream.

‘And then we moved into the barn, and everybody was like “It must be amazing,” and I was like “actually it’s s***”.

‘This thing that we worked towards for so long and then I had it and then felt “what do we do now?”,’ she says. 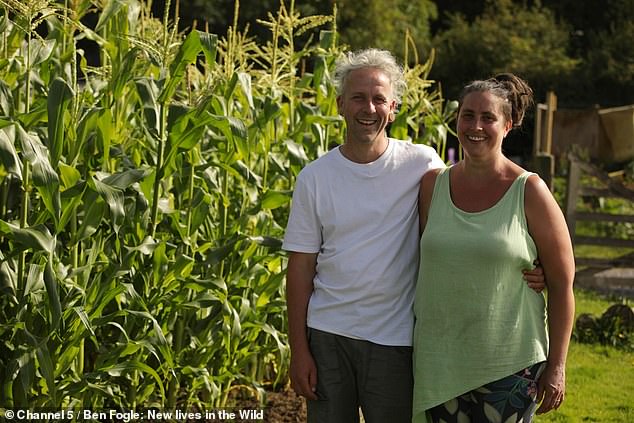 Stig and Dinah, pictured now, have the home they’ve always dreamed of, but coming down from the fight was a challenge for Dinah, who admitted living the dream was not everything it was cut out to be 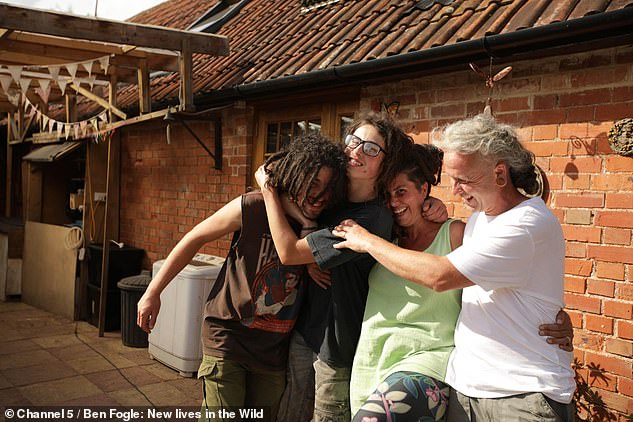 Stig and Dinah’s boys Dali (left) and Yossee, centre, are now 18 and 17 and endorse their parents’ way of life

‘Stig and I spent 20 years fighting to live, living on a council estate and we thought for that, and we fought for this and then when you don’t have any external thing to fight, what do you fight for? You fight each other, don’t you?’ she adds.

‘This is the mindset that I’m in and I was in for so long. So that was the tough bit. But we’re on the other side of this now.’

However, gazing upon the limits of Dinah and Stig’s land, Ben can’t help but notice another fight might be brewing. 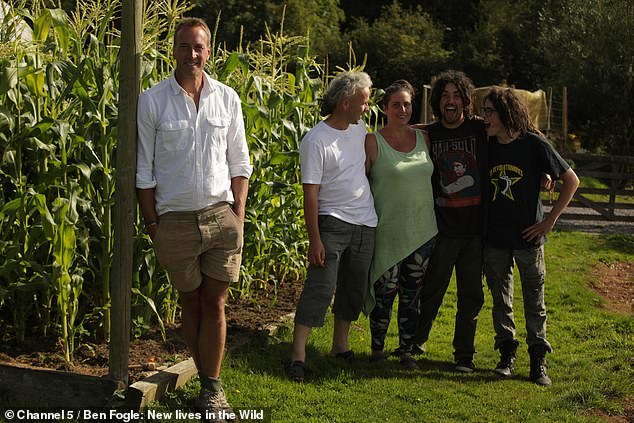 Dinah told Ben she felt the dream was s*** after he finally moved into her barn, because she didn’t know what she wanted to do next 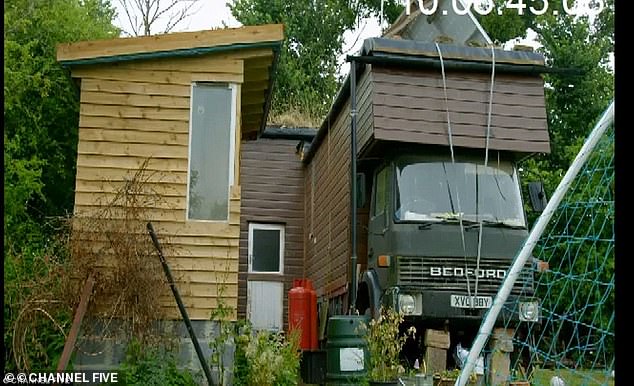 ‘The thing about the Mason family is, they were in the horse box and now they finally created what they have and it seems a bit unfair because there, you got an industrial estate being built oou can hear the noise and everything,’ he tells the camera.

Ben believes it’s unfair for an estate to be built next to the Mason’s property, because they have created an eco-friendly house with a very small impact on the environment.

Before moving to Devon, the family lived on a council estate in Baldock, Hertfordshire. 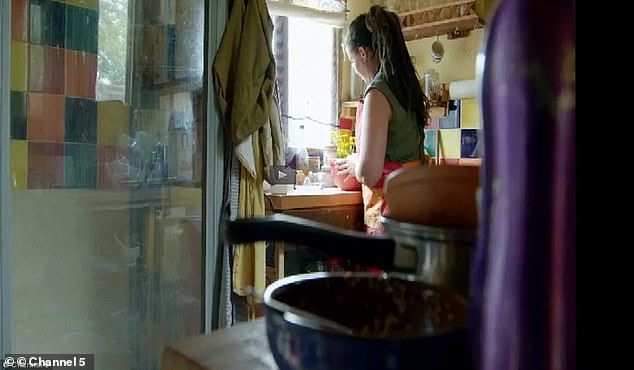 Dinah cooking in the horse box back in 2015 during Ben’s first visit. Since then, the family have turned things around

Stig was a stay-at-home father and Dinah was in a low paid job. They felt the future was bleak and as eco-enthusiasts, they longed for a different life where they could live off the land.

‘We kept chickens and were recycling before it was cool,’ Stig said. ‘We were the oddballs on the council estate and it didn’t feel like life was going anywhere.’

Dinah said they also feared for their sons’ future.

‘My biggest fear was that my children would get in with the wrong people, all the bad things you hear about living on a council estate near London and I worried I would lose them,’ she said.

When they gained an inheritance of £75,000, they looked for land to buy and found it in Devon, spending £47,500 in 2009 for four acres. They used the rest of the money to buy livestock, crops and materials.

The couple were initially delighted they could finally achieve their dream of ‘the good life’.

Dinah said: ‘Handing back the council estate keys was up there with the birth of my children and getting married.’

However, their happiness was short-lived when they weren’t welcomed with open arms by the village community in Willand.

As the land they owned was for agricultural use, they couldn’t legally live there and there was no building in which they could stay – hence the horsebox became their home.

This didn’t go down well with the locals who thought they were travellers scouting out the area before moving a whole troop of caraveners to join them on the land.

Within a month, the council had served them with a notice to leave. This was just the beginning of a four year legal struggle – where the threat of prison saw the family move off the land for a short time and nearly give up on their dream.

Dinah said: ‘People thought we were mad to pack up and drag our children down into the unknown and we tried so hard to make a go of it but thought we might have to give up. But we had promised the boys they wouldn’t have to change schools again.’

A change in the planning law allowed them to return in 2011 and they converted the horsebox for £2,000 to make it a more homely place for them to live.

Ben Fogle: New Lives in the Wild is airing tonight at 9pm on Channel 5.