Home » Lifestyle » Fashion Is Back in the White House

Fashion Is Back in the White House 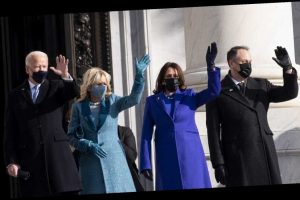 While fashion may not be the first thing you think of when you consider the last four years of Donald Trump's presidency, the impact his administration had on the relationship between clothing and politics is undeniable.

Beginning in 2015, while he was still a candidate, brands that for decades rubbed shoulders with politicians across the spectrum were forced to choose a side. Traditionally, it was considered an honor for an American designer to dress the first lady, but when it came to Melania Trump, dozens — including Tom Ford, Marc Jacobs, Zac Posen, and Christian Siriano — said they wouldn't normalize Donald's presidency by lending her clothing in the same way they had done for past first ladies. In turn, Melania made little effort to highlight emerging American brands through her outfits, and instead opted for luxury ready-to-wear or aptly timed message jackets.

In the eight years prior to the Trump administration, whatever the first lady wore became an instant sell-out (known as the Michelle Obama Effect). She famously wore mall brands like J.Crew, which was emblematic of shifting priorities after an economic crisis. "Ladies, we know J. Crew. You can get some good stuff online!" she once said during an appearance on The Tonight Show.  Though it was strategic and meaningful, she made fashion feel light and accessible in those years.

But starting in late 2016, the runways reflected the mood-shift. Protest fashion became the new way for brands to show their opposition to the policies of the new administration. In 2017, Public School sent red baseball caps reading "Make America New York" down the runway; Christian Siriano closed his show with "People are People" shirts; and Robert James staged a pseudo-protest with models carrying signs speaking out against Trump's anti-refugee agenda.

Gypsy Sport designer Rio Uribe cast his models for the 2017 show at protests against Trump's Muslim ban, and made a speech about inclusion before they came down the runway. Raf Simons, then-designer for Calvin Klein, opted for a more subtle form of protest, sending a collection of cowboy-inspired "Americana" designs like square-toe boots down the runway as David Bowie's "This Is Not America" played in the background. Fashion and the White House had turned their backs on each other.

That is, until the inauguration of Joe Biden on Jan. 20, when a shift in this relationship was so palpable, it was all anyone could talk about. Stepping on to the balcony of the Capitol building, Jill Biden wore an ocean blue dress by designer Alexandra O'Neill, an up-and-coming female designer whose label Markarian is based in New York City. Vice President Kamala Harris made history while wearing a look by Christopher John Rogers, a young Black designer from Louisiana. Even Bernie Sanders made a splash wearing a pair of sustainable mittens by a teacher in Vermont. In a lot of ways, it was a peek into how we might see fashion utilized symbolically to promote the Biden-Harris policy priorities. On Jan. 25, the president signed an Executive Order prioritizing American industry. "I believe there's no greater economic engine in the world than the hard work and ingenuity of the American people," he wrote in a tweet about the signing. "Today's Buy American Executive Order will invest in the future of American industry and ensure workers are treated with the dignity and respect they deserve."

While it's not clear how exactly this order would apply to the fashion industry, Dr. Biden and VP Harris's made-in-America looks from the inauguration are certainly a step in the right direction. But, of course, there should be action and accountability as well.

Inequity between the working class in America and those at the top has never been so stark as it is during the COVID-19 pandemic. In fashion, it's especially true. Garment workers were among some of the hardest-hit people in the industry, having been subject to job loss and unsafe working conditions. There have been reports of virus outbreaks and canceled orders that have left workers without pay for jobs already completed. Right now, the administration could push for legislation that protects them and gives them a fair wage. The administration could also incentivize more U.S.-based fashion brands to work with domestic factories that they can better regulate simply because of the proximity.

For now, we can be grateful that the first and second families wear brands that do make ethical and sustainable choices. They can and should continue to amplify designers like Mara Hoffman, who has made sustainability and anti-sweatshop labor a part of her brand's DNA, Phillip Lim, who is currently working on innovative technologies for more sustainable fabrics, and Pyer Moss, who has created more representation in the industry while pushing back on outdated traditions like the fashion calendar. They should keep wearing Gabriela Hearst, who has brought the idea of a carbon-neutral show to New York Fashion Week, and Brother Vellies, whose designer Aurora James is pushing for meaningful shifts in diversity across the retail industry.

We want to see them wearing Collina Strada, which has become the go-to New York brand for youthful sustainability (we see you, Ella Emhoff). Hell, give us Jill Biden in an Eileen Fisher sweater and highlight a designer who has been pushing for this exact change for decades.

In 2021, amplifying messages like "people are people" is just as important as before. But soon, with a more reasonable and responsible administration in control, we may be able to move on from bullhorn activism into steady and reliable change. We know the first and second families are ready for this tide to turn, and we will be standing by to see how they dress for the part.