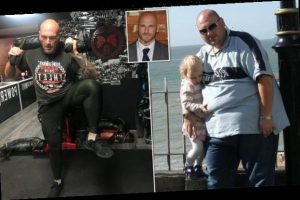 A father nicknamed ‘sumo wrestler’, has revealed how he was prompted to lose almost 20st, after becoming fearful that his daughter would be bullied in the playground for having a ‘fat dad’.

Carl Prodrick, 45, from Rochester, Kent, piled on the pounds by scoffing sandwiches, sweets and crisps bought at motorway service stations, while working as a delivery driver for a car company.

At 33st, Carl saw his waistline expand to 64 inches, while his body mass index (BMI), used to gauge a healthy weight, soared to 62.5, compared to the recommended NHS limit of 24.9.

He said his turning point came as his daughter, Ruby, prepared to join primary school. Terrified that she would be teased about his bulk, he looked into bariatric surgery.

However, due to a long waiting list, he joined Slimming World in the spring of 2012. 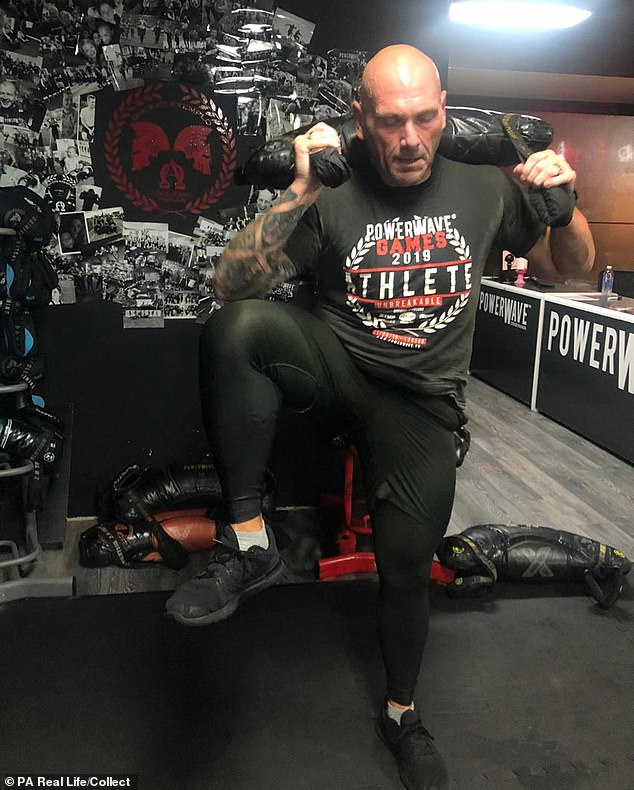 Carl Prodrick, 45, (pictured) from Rochester, Kent, who once tipped scales at 33st, has overhauled his lifestyle, fearing that his daughter would be bullied for having a ‘fat dad’ 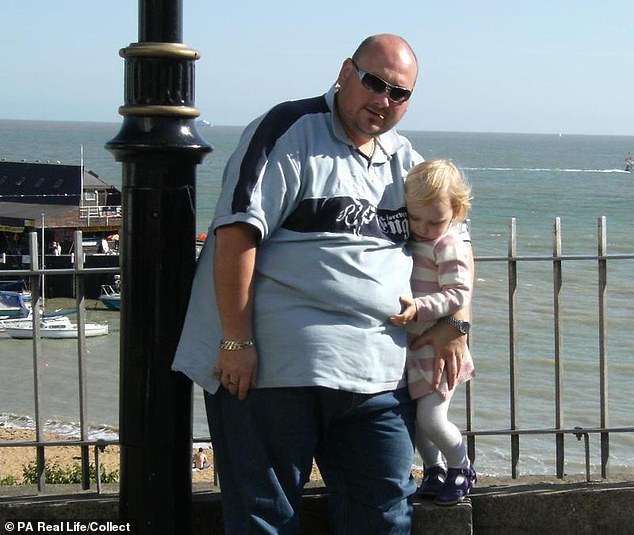 Car company delivery driver(pictured before with daughter, Ruby) saw his waistline expand to 64 inches, as he scoffed sandwiches, sweets and crisps bought at motorway service stations

Carl who is 6ft, was able to shed 10st in just 10 months then followed up with a gastric bypass, losing 19 stone. He even became ‘too thin’ at 14st and decided to put some weight back on.

‘When my daughter Ruby, who is now 13, was due to start school, I started to worry about my weight,’ he said.

‘You know what kids are like. They will look for any excuse, or find any weakness and use it to pick on someone.

‘I did not want to be the cause of her getting bullied. Of course, I didn’t want her to get bullied at all, so I didn’t want to give anyone any ammunition.

‘Ruby had never mentioned my weight to me, but I did not feel comfortable picking her up from school at the size I was – for her sake, rather than mine.

He has become a regular gym attendee, working out at least five times a week and is set to take part in the London Landmarks Half Marathon in March to raise money for Cancer Research, after losing his beloved mum Jan Prodrick, who was in her seventies, to the disease last September. 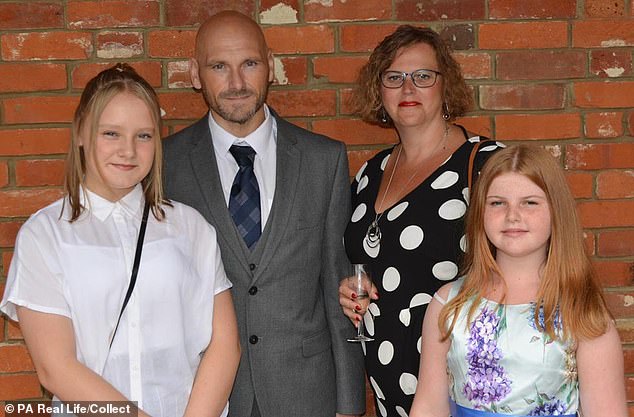 Carl (pictured with wife Tracey,  daughter Ruby and stepdaughter Isabel, 10) who had always been a ‘big lad’, said he would indulge in takeaways and fast food 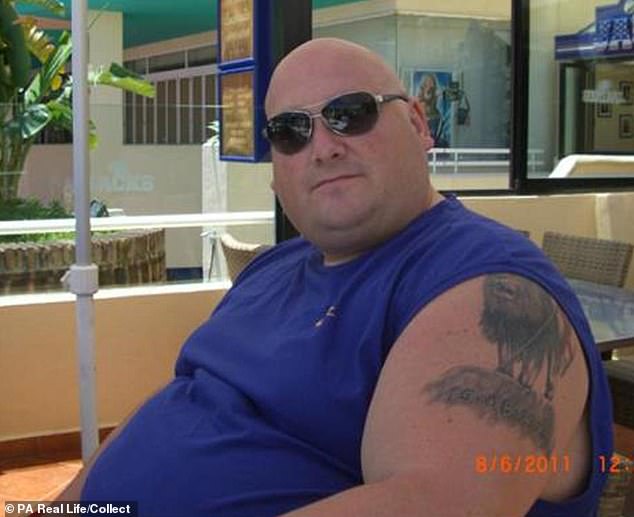 Carl (pictured before) revealed that he had no health concerns before his weight loss, and was quite active playing rugby as well as going to the gym 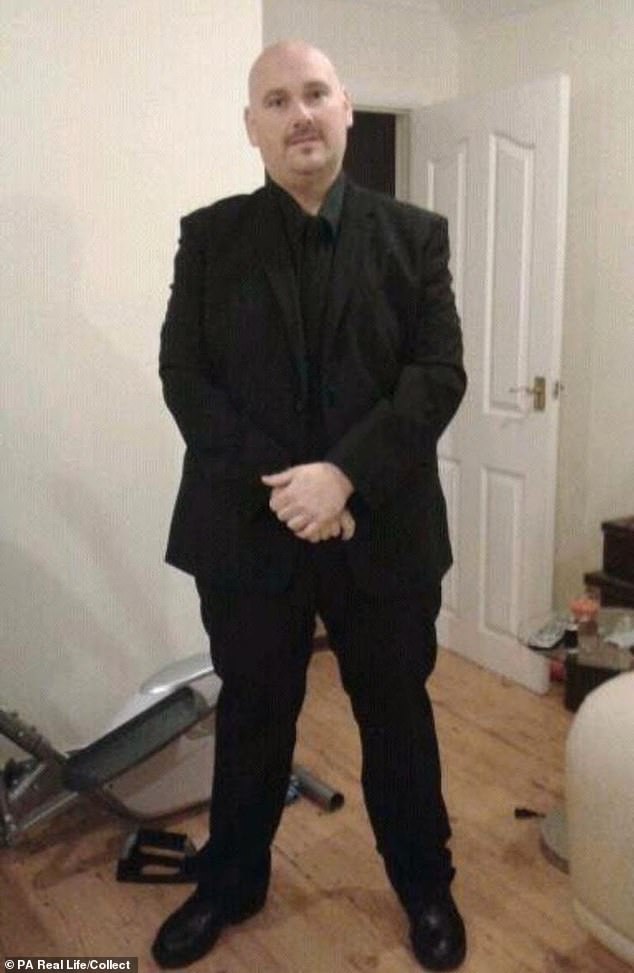 Carl (pictured during his weight loss) said his friends would make jokes, calling him ‘sumo wrestler’ but he wasn’t bothered at the time

No longer with Ruby’s mum, Carl, is married to school chef Tracey Prodrick, 42, and has a stepdaughter, Isabel, 10.

He continued: ‘I’ve always been a big lad and I used to do a lot of driving in my old job, which meant stopping at motorway service stations for food.

‘I was doing that job for three or four years, eating fast food, sandwiches, crisps and having fizzy drinks. Then, in the evenings, I’d be staying in hotels, having dinner on expenses and there’d always be dessert. 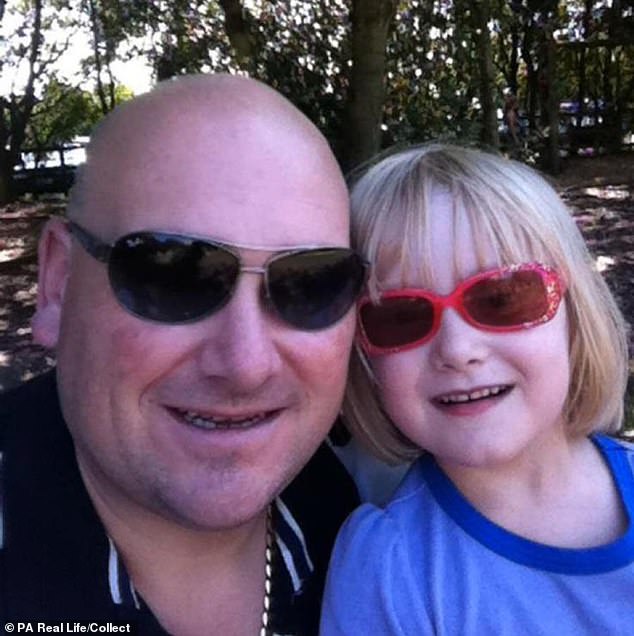 Carl (pictured before weight loss with Ruby) followed the Slimming World points plan, while limiting fast food to one meal a week

‘I was eating a lot of fast food and takeaway food like Chinese, pizza or fish and chips – that I knew was wrong, but I was enjoying it. My weakness was crisps and I could eat multiple packs of them in a day.

‘But I had no health issues. There was no diabetes and I was actually still quite active and played rugby. I also went to the gym, but not enough to drive my weight down.

‘There was always a bit of joking from my mates, but I have a thick skin, so it didn’t bother me.

‘I did get called sumo wrestler, but I played up to it. I was not bothered at the time, but looking back, maybe playing up to it was my way of saying I didn’t care, when deep down I did.’

Salad with ham, chicken or seafood with low fat dressing or jacket potato with beans.

Fruit, crab sticks, chicken or one packet of crisps.

Carl’s wake-up call came in the spring of 2012, when he realised Ruby’s first term at primary school that coming September was only months away.

He applied for NHS funding for a gastric bypass, surgery to decrease the size of the stomach, so less food is needed to feel full.

However, the waiting list was so long that he decided to diet instead.

‘I started following the Slimming World points plan and ditched the fast food, eating their meals – like salad and jacket potatoes – instead,’ he said.

‘I would allow myself one treat meal a week, usually a kebab or something like that, but only if I’d lost weight that week.

‘I was really disciplined with it. Once I’d decided to do it, I really wanted to be successful. And the more weight I saw coming off, the more it motivated me.

‘After I lost five stone, my doctor secured me the funding for the gastric band, too, which I was told was quite rare, so I decided to go for it.’

By then, having changed jobs, Carl was spending less time on the road and more hours in the gym. 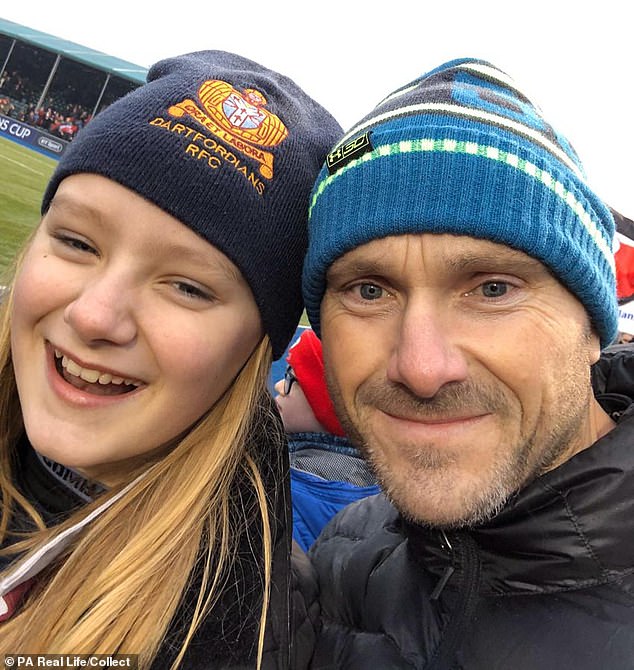 Carl (pictured after his weight loss with Ruby) revealed that he followed a restricted diet for around 12 weeks, after having NHS-funded gastric bypass surgery

In October 2012, he had an NHS funded gastric bypass – where surgical staples are used to create a small pouch at the top of the stomach, which is then connected straight to the small intestine, meaning less food will be required to feel full, and fewer calories absorbed.

He said: ‘I had that done and then was on a liquid diet for a good few weeks. I was restricted in what and how much I could eat for eight to 12 weeks.

‘The weight just fell off, so that, 10 months after I started dieting, I’d lost 10st.

‘But I was too thin, I looked unwell. I know when I’m at my healthiest I’m between 15st 7lb and 16st 7lb, which is what I tend to stay between now.’

After his gastric surgery, Carl stopped enjoying food as much, which has been good for his waistline, but has removed a lot of the pleasure from eating.

‘It’s now just fuel for me rather than something to be enjoyed, I’ve just fallen out of love with it.’ he said

‘I would never go back, but eating now is just something I have to do. ‘

At the start of his diet, Carl spent two to three hours a day in the gym, usually doing cardiovascular work on the treadmill, exercise bike and rowing machine. 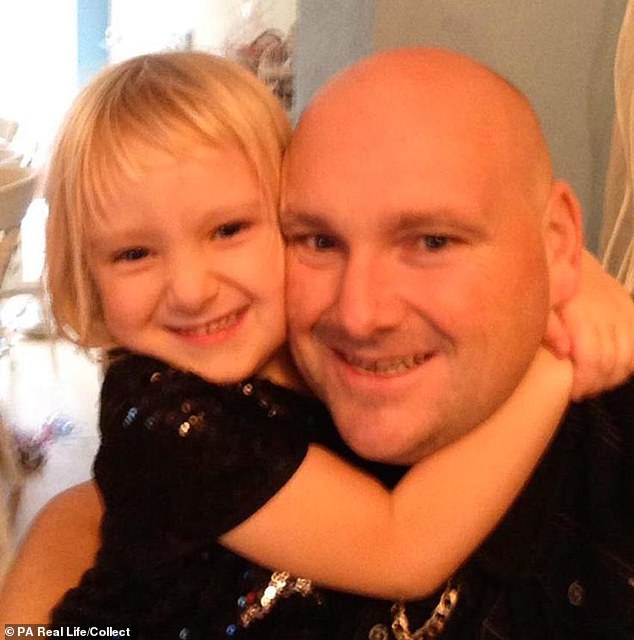 Carl (pictured before with Ruby) swapped extensive cardiovascular work in the gym for 30-minute HIIT, as advised by personal trainers 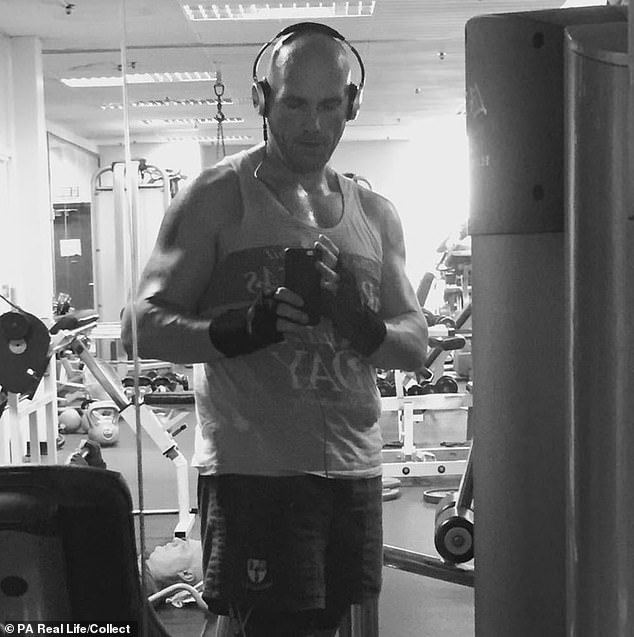 But, after speaking to personal trainers, about three years ago he started doing 30-minute HIIT (high intensity interval training) sessions, which include a mix of cardio and toning, which he does five or six times a week.

He continued: ‘I enjoy that much more than spending hours in the gym. It’s improved my physique and made me much fitter.

‘Everything is so much easier now. From getting around, getting in and out of bed, even pulling my socks up.

‘I just feel proud of myself and what I have done.

‘It’s a lot of hard work. I did have a gastric bypass, which is not an easy way of doing it. You still have to work with it and you do so every day. Once you’ve lost the weight you still have to keep it off.

‘My wife didn’t know me when I was at my biggest, but she can’t believe how far I’ve come when she looks at the pictures.

‘I feel like I’m looking at a different person. Sometimes I don’t recognise myself.

‘My daughter doesn’t remember “Fat Daddy”, so it doesn’t make much difference to her, but she was my motivation.

Carl (pictured before left) revealed that his wife didn’t know him at his biggest, but is surprised by photos showing how far he’s come 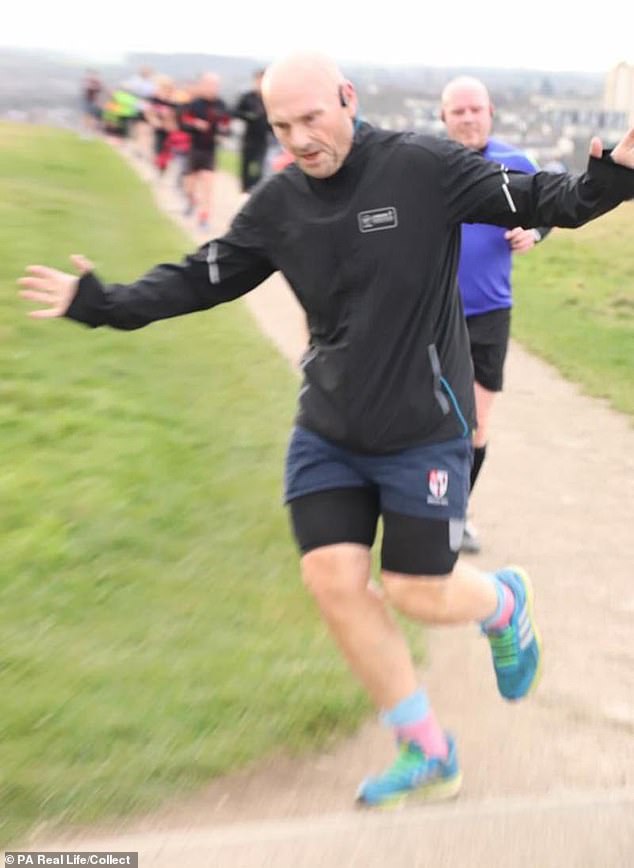 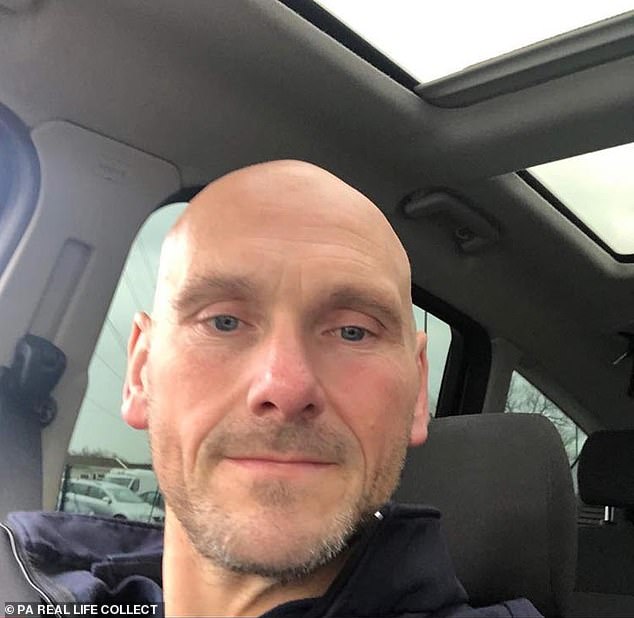 Carl (pictured) who is raising money for charity to honor his mum Jan, said that she was really proud of his weight loss

‘And knowing I might have made her school life that little bit easier by losing this weight makes me happy.’

Carl completed his first half marathon in 2016 and will be running the London Landmarks Half Marathon in the spring in honour of family members.

‘Just being able to run that sort of distance is amazing, as I’d never have dreamed of it a few years ago,’ he said.

‘But I do think this will be my last half marathon, as carrying all that weight for so long has hurt my knees, although I will carry on doing short runs.

‘This time I’ll be running in honour of my mum Jan, my father-in-law Alan Maltby, and my friend, Sadie Jerry, who was like a second mum to me. They all lost their lives to cancer.

‘Mum was really proud of me for losing weight and I know she’ll be looking down on me. I feel so proud being able to do this in her memory.’

The London Landmarks Half Marathon will take place on March 29 in support of Cancer Research UK.

If you are interested in helping support Carl and the 14,000 other runners taking part in this year’s event, there are a number of fun and essential volunteer roles available.