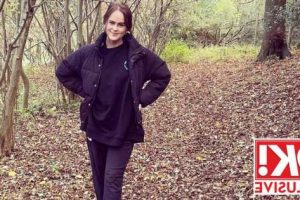 Pregnant Love Island star Molly-Mae Hague revealed last year that she’d been diagnosed with Endometriosis. The condition causes tissue similar to the lining of the womb to grow in other places, such as the ovaries and fallopian tubes, making it difficult to conceive naturally.

Molly-Mae announced her own pregnancy just recently, and fans commented on how her news has given hope to other Endometriosis sufferers.

Her painful health struggles are something Annabelle Jones, the 29-year-old daughter of Dragons’ Den star Peter Jones, knows all too well. Unlike Molly-Mae, Annabelle is going it alone in her bid to become a mum and following her love overdue diagnosis has been sharing her fertility journey in an online blog.

Here she tells OK! her story…

“When Molly-Mae talked about her ‘excruciating periods’ it was something I could totally relate to. I’ve suffered with my periods for over 10 years, and have only recently been diagnosed with Endometriosis.

My periods vary massively. Some months the pain is manageable with prescribed medication, but other months the strongest dose of prescribed meds doesn’t even touch the sides. In a bad month I’ll bleed through high absorbency tampons nearly every hour. I’ll be sick and faint or feel extremely weak, which means I can’t drive or even stand for too long. And of course I have an unmanageable amount of pain.

Describing her own “agonising” experience with Endometriosis, Molly-Mae recalled feeling “fearful I wouldn’t wake up in the morning” adding, “it was so, so horrendous."

My pain feels like “contractions”. I try to breathe deeply through them, but end up screaming and crying. It comes in waves and can last around four hours with only about 30 seconds to breathe in between.

With age, the pain and the heaviness has increased and I often have blood everywhere (literally). Unfortunately this can be made worse by exercise, even though this is something that can relieve my symptoms.

It really is tough to live a normal life and I often feel restricted. Bad months happen far too regularly. I’ve not yet worked out the triggers and each cycle seems to differ so I never know what to expect until the day. It must seem like I’m always complaining, but the sad fact is, part of my body is doing more harm than good. It controls and takes over everything.

Endometriosis is a chronic long-term condition that takes an average of around eight years to be diagnosed, which is why it’s so important for young girls to be aware of the signs, and to know what’s considered normal or not.

Symptoms vary from person to person, but like me, the majority will experience severe period pains with heavy bleeding, vomiting, diarrhoea, pelvic and hip pain, as well as bloating. Endometriosis can also result in fertility issues.

Less than two years after my diagnosis I had an operation which showed that my Endometriosis was spreading and my insides were extremely red and angry. I was told my fertility could be at risk and this was confirmed after tests at a private clinic.

I now know there’s a very high chance I won’t conceive naturally – I also have PCOS which affects ovulation. I cannot imagine life without being a mum.

Time is potentially running out, so I had to make a decision: either have everything removed [my womb, ovaries, cervix, fallopian tubes] and lose my chances of becoming a biological mum forever, but hopefully pain free. Or get my eggs frozen to buy me a little time and have a baby via IVF.

A lot of thinking and a lot of tears later, I decided on the IVF option. I know it will be life changing but it’s what I need to do. I’ve chosen a single cycle of IVF meaning medication/treatment, scans/appts, egg collection, freezing for up to a year, and a frozen embryo transfer when I feel ready within that time.

I can pay for my eggs to be frozen for longer, but the quality may decrease as time goes on, and it’s already an expensive process as it is. But also, until egg collection, I won’t know how many will be retrieved, if any, or the quality of my eggs. My dream of becoming a mum could fail at the first hurdle and I need to be prepared for that. In fact, I may never be able to become a mum, but at least I can say I’ve tried.

For years I was pushed aside and told ‘you just have bad periods’. Period pain should be manageable with over-the-counter painkillers such as paracetamol – if it’s not, you should see a professional.

I used to find it embarrassing to talk about my periods, but I’ve become so passionate about breaking the silence with taboo topics, and making sure girls don’t feel alone. I’ve even published a book aimed at young people, ‘You Are You’, in which I speak openly about periods while shining a light on mental health issues such as depression and anxiety.

My mental health has been massively affected by this whole journey but I’m focusing on my self-care and using coping mechanisms that work for me, such as meditation and journaling.

I really hope my story helps those who suffer with their periods, Endometriosis, PCOS or fertility, and that you now realise you’re not alone. Doctors are there for you and the sooner you get help, the sooner you can start feeling better.”

See Annabelle’s full story on Instagramand on her blog. Her book You Are You is out now.