Nervousness is not a state of being you'd generally associate with Bono, one of the rock world's most commanding and confident frontmen. But here he is just hours away from the first show of the fifth leg of U2's Joshua Tree Tour and he and his bandmates are still wondering if they've got it right.

"We've been away from it for a bit, but it's coming together," says Adam Clayton, the band's bassist, as the four descend from the stage where they've just finished a rousing soundcheck. "Muscle memory." 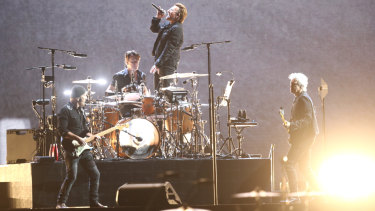 U2 performing at Mt Smart Stadium on November 08, 2019 in Auckland, New Zealand.Credit:Getty Images

He's referring to an incident in New York in 2014, when he swerved to avoid another cyclist and woke up in hospital with – he said later that year – "my humerus bone sticking through my leather jacket". 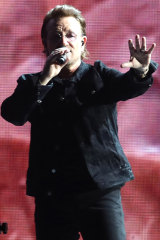 “Unfortunately, it is not like riding a bike,” Bono says of pulling together live shows. Credit:Getty Images

His arm was broken in six places, his eye socket fractured, and he was left with a titanium elbow. Bono wrote at the time that "it is not clear that I will ever play guitar again," adding wryly that his bandmates had pointed out "that neither they nor Western civilisation are depending on this".

But what fans of the band have been depending on is that the much-delayed visit to Australia would finally happen.

They were last here in 2010, and were meant to visit a couple of years ago but the recording of the studio album Songs of Experience – a companion piece to Songs of Innocence, the album that was dropped onto 500 million Apple devices simultaneously in 2014 – got in the way.

They then decided to tour those two albums in the northern hemisphere, having played the last shows in their Joshua Tree Tour in October 2017. Now, finally, the Australasian leg has kicked off, starting with this Friday night show at Auckland's Mt Smart Stadium before crossing the ditch to Brisbane on Tuesday, and thereafter working its way around the country.

It's a massive show, the centrepiece of which is a massive high-resolution LED screen 61 metres wide and 14 metres high. It is topped by an abstract shape, a representation of the Joshua tree – a yucca plant native to the Mojave desert – after which the band's 1987 album was named.

Acclaimed as their masterwork, and indisputably their biggest success with sales of 26 million and a plethora of hit singles (including I Still Haven't Found What I'm Looking For, With or Without You and Where the Streets Have No Name), The Joshua Tree warranted revisiting, they believed, not simply as an act of nostalgia – call U2 a heritage act at your peril – but because its themes resonate even more today than they did back then. 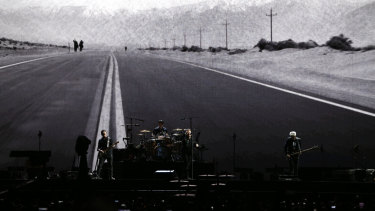 Where the Streets Have No Name unfolds to a black and white movie of an endless road dotted with refugees.Credit:Getty Images

"Doing these shows has been very special for us, a lot of emotion," Bono has said. "From the despair of how relevant some of the dark songs still are, to the joy, pure fun of the staging… it's quite a ride."

The Dutch photographer and filmmaker Anton Corbijn, who shot the pictures for the album 32 years ago, has made a series of short films that play across that massive screen.

When they first take to the stage, though, they ignore the screen entirely. They walk along that catwalk – actually another rendering of the Joshua tree – towards a smaller stage set 30 metres or so into the crowd.

Larry Mullen jnr arrives first, pounding out the intro to Sunday Bloody Sunday on his drum kit, the others joining him one by one. It’s a stunning start. 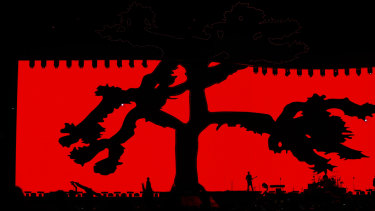 U2 perform on Friday at Mt Smart Stadium in Auckland ahead of their Australian gigs. Credit:Getty Images

New Year’s Day, Bad, Pride (In the Name of Love) follow, all performed on that simple stage, just the four of them dressed in black, a throwback to the band in its pre-stadium incarnation.

But then the screen comes to life, red with the tree picked out in black, the band silhouetted against it, and we’re off.

Where the Streets Have No Name unfolds to a black and white Corbijn movie of an endless road dotted with refugees, With or Without You to a gorgeous timelapse sequence of desert ranges, and the ability of this four-piece outfit – dwarfed by that screen – to fill a stadium with their sound and passion and occasional fury is beyond question.

As the band plays Red Hill Mining Town, a Salvation Army brass band fills every pixel, their horns providing musical accompaniment. As they rip through Bullet the Blue Sky, a series of ordinary Americans – of various ages and ethnicities – stands in front of a shed painted with the stars and stripes, donning the helmet of a GI.

On Every Breaking Wave – from that Apple album, a "gift" to the world that was scorned by many – it's just Bono on vocals and The Edge on piano for most of the song, their faces captured live and beamed to the big screen. At the soundcheck before the show, Bono wandered along the catwalk stage to address the two dozen journalists who constituted what must have been the smallest crowd these four have played before in 40 years.

"That song began in Sydney," he said. "We recorded some of it there, but then it went down the drain for seven years, up the arse, as these things do."

He began to walk back to the main stage, but paused halfway and turned to address us again.

If you didn't know better, you'd swear he was nervous about what we might think of it, but he needn't have worried. Forty-three years after four schoolmates decided to jam together, nine years since they last graced our shores, and two years since they last mounted this show, U2 still know how to rock.

Maybe it is just like riding a bike after all.

The author travelled to Auckland as a guest of Live Nation. U2 perform in Brisbane on November 12, Melbourne November 15, Adelaide November 19, Sydney November 22 and 23 and Perth November 27. Details: u2.com

END_OF_DOCUMENT_TOKEN_TO_BE_REPLACED

END_OF_DOCUMENT_TOKEN_TO_BE_REPLACED
We and our partners use cookies on this site to improve our service, perform analytics, personalize advertising, measure advertising performance, and remember website preferences.Ok