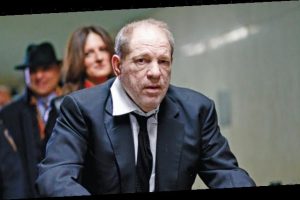 Stating that “there’s no controversy” that women’s rights are of the utmost importance, the judge said, “But that is not the issue here. The issue is not if you feel strongly about those subjects, but only if those beliefs would prevent you from deciding facts on the case. You are, of course, allowed to have strongly-held beliefs, but that is not the question everybody understands. Again, the sole issue is for you to decide whether or not the defendant committed certain acts, which constitute a particular crime…you must decide this case on the evidence.”

Selecting five jurors is a swift move in the trial, signaling that opening arguments will in fact begin on Jan. 22, as originally scheduled, following many motions from Weinstein’s defense team in an effort to delay the jury selection process.

Before the potential jurors entered court this morning, the first order of business from Weinstein’s legal team was to, once again, ask for individual sequestered jury selection, which the judge swiftly denied.

Weinstein’s attorneys had initially filed a motion on Jan. 10 asking for individual sequestering of jurors, which Justice James Burke immediately denied, but today, Weinstein’s attorney Donna Rotunno asked if she could argue the motion, which the judge hesitantly allowed.

Rotunno shared that 31 people still in the pool of potential jurors said they are victims or sexual assault or know someone who is a victim of sexual assault.

“We believe that the topics that come out on Harvey will elicit responses that contaminate the entire pool,” Rotunno argued. She later said, “Every juror said they have heard about this case, and we need to know exactly what they know.”

She also cited reporters swarming the courthouse and last week’s feminist flash mob as distractions to the jurors, questioning how potential jurors will feel about the “media attention, rallies, things that are happening inside and outside the courtroom,” but she said the media was not the main reasoning for wanting individual jury selection. “I want to be clear, we are not asking in any way to exclude the media…the issue is not the media. The issue is about what the answers elicited will do to the entire panel.”

In response to Rotunno asking to strike potential jurors who are victims of sexual assault, lead prosecutor Joan Illuzzi from the D.A.’s office shot back, strongly disagreeing.

“I don’t think the defense could possibly say that a person who had either themselves been sexually assaulted or know someone who has been sexually assaulted now are no longer qualified to sit on this case. That is not the law, and that doesn’t seem to be cause-challenging in any way shape or form,” Illuzzi said. “There is absolutely no reason for an entire [group] of people to be excluded because they have been the victim of crime or know someone who has been the victim of sexual assault.”

Earlier this morning, roughly 200 people were called back into court as potential jurors with around 60 people, including supermodel Gigi Hadid, being dismissed.

END_OF_DOCUMENT_TOKEN_TO_BE_REPLACED

END_OF_DOCUMENT_TOKEN_TO_BE_REPLACED
We and our partners use cookies on this site to improve our service, perform analytics, personalize advertising, measure advertising performance, and remember website preferences.Ok