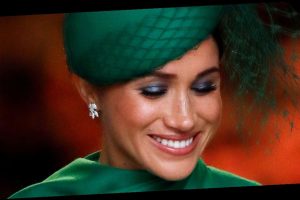 Join the OK! VIP newsletter and receive big exclusives to your inbox before anyone else!

When we say a royal has broken beauty protocol, we mean in quite a subtle way, not that they decided to go off on a whim and dye their hair bright pink for an official visit.

But nonetheless, there have been several occasions where we have done a little gasp at a particularly bold nail colour or hairdo that a royal has opted for instead of a pre-approved colour or style.

The two main beauty rule-breakers are Kate Middleton and Meghan Markle, who have subtly modernised royal beauty standards over the past few years.

But the younger members aren’t the only ones to have raised an eyebrow with their beauty choices – even Queen Elizabeth herself has had a little lipstick slip, proving that it really is quite easy to make a beauty faux-pas.

It’s no secret that the royals have quite a limited shade selection when it comes to nail varnish, consisting mainly of light neutrals or a clear gloss. Case in point, Queen Elizabeth’s supposed favourite polish – Essie’s Ballet Slippers.

But at the British Fashion Awards in 2018, a pregnant Meghan matched a sleek one-shoulder black gown with a glossy dark cherry nail shade.

It’s said there isn’t a particular rule about not wearing darker nail colours, but that it’s simply not preferred.

According to the William & Kate: The Journey documentary, Kate was apparently encouraged to wear her hair up for her wedding, but fought against it.

Since royal brides have a 300-year-old tradition of wearing updos to their nuptials, this could have been quite a battle. The result seems to have been a bit of a compromise, with Kate opting for a gorgeous half-up look instead.

If you’ve been wondering how Queen Elizabeth could have possibly made a beauty error, when she’s had decades to learn the rules, it was back in 1985 at the Windsor Horse Show, when she was pictured reapplying a bold pink shade of lip balm.

Since public make-up touch-ups are apparently discouraged, this act would have technically gone against protocol.

Meghan has made a messy bun something of a signature look, and has pioneered loose tendrils right from the get-go. She was even daring enough to go for an undone chignon for her wedding day.

The problem? Protocol apparently states that hair should be sleek and neat at all times, hence why so many of the royal women rarely stray from a glossy blow-out or a hat.

Personally, we love her messy updos.

Despite a neon resurgence happening in make-up at the moment, it’s unlikely the royals will be taking part in the trend as they are reportedly advised to steer clear of bold eyeshadow colours.

Meghan, however, wore a daring metallic blue shade on her last official royal engagement in 2020, when her and Harry attended a Commonwealth service at Westminster Abbey.